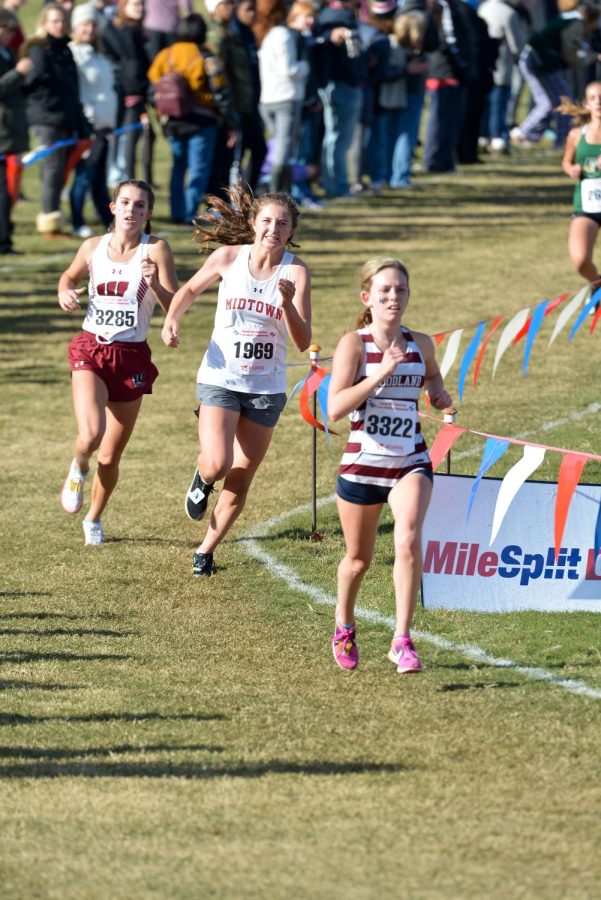 Freshman Cate Barton competes during the State 5A meet. Barton was the Knights' number two finisher. "I was just really excited to see how our team could do because this is what all the training has gone into,” Barton said.

The girls cross country team’s season culminated with a third-place finish at the State 5A meet, which was high enough to earn a spot on the podium with the top four teams.

The state championship meet is traditionally the most competitive and toughest race of the cross country season. The team finished with just 112 points and an average time of 20:42, the fastest in team history on the state course.

Head coach Jeff Cramer, who’s coached at Midtown for 24 years, said this team is among the more special teams he’s coached, much of which can be attributed to strong leadership from runners like Marlowe.

“This year was special,” Cramer said. “It always helps to have a front runner, and we’ve had a couple of years where we’ve had a girl who’s been able to run in the top five. That’s just a huge plus for your team score, just to essentially run four people in that case.”

However, Cramer maintains his decades-old philosophy of the importance of running as a team and maintaining a roster with depth. This year, the team had nine runners break 22 minutes in the 5k, seven break 21 minutes and three break 20 minutes. Only five runners contribute to the team’s score in races. In past years, almost any of these runners would have been the best runner on the team, and in most other programs in the state, they would be. But for the Knights, that is not the case, due to roster depth.

“It’s not the top runner; it’s that second group of four,” Cramer said. “This year’s average time at state was by far the fastest time we’ve ever had — like a whole minute faster.”

The team finished with a time differential of 1:55 between their first and last-scoring runners, their best split of the season, and a competitive split among the high-level competition at the state meet. Athletes running closely together is what separates the teams that podium from those who fall short and are what makes a championship team, according to Cramer.

“The whole first seven all ran under 21 minutes at some point, and any one of them would have been the fastest runner on the team in years past,” Cramer said. “So, this was a genuine group effort. If I were to randomly name any one of those seven, I would say that it was a spectacular year for them.”

The high level of competition added to the excitement of doing well at the state meet.

“The exciting thing to me about this is that if we had run this year’s times in any other year, we would have won the event,” Cramer said. “That’s exciting because it’s good to know that the competition continues to improve. I don’t want to say we won a trophy because the competition was no good. I want to say we got third, even though we were in the fastest classification in the state, and we probably were, for both boys and girls.”

Another unique aspect of this year’s team is the number of young runners. None of the top seven runners who competed at the state meet are seniors, and only three are upperclassmen. The Knights’ number two and four finishers, Cate Barton and Sierra Pape, are both freshmen.

“I think the fact that we are a younger team is really great because we have years ahead of us to get better and better,” Marlowe said. “When Emilia and I leave after next season, there’s still going to be a team, and it’s just going to keep building and getting better and better every year.”

Barton placed second for the team, finishing 21st in 20:39, which would’ve led almost any team in school history. It was only her third time ever competing in a cross-country race, and her first time on the big stage of the state meet.Marlowe expressed a great deal of pride for Barton’s strong effort at the state meet.

“I am so proud of Cate,” Marlowe said. “I actually texted her the day after the race because I looked at the pictures, and I just saw that she was really trying her absolute hardest. I was just so happy for her. She did such a great job, as did the rest of the team, but Cate, in particular, I was very proud of.”

Likewise, Cramer said the team would not have done as well without Barton’s performance at each meet she competed in.
“Cate made that huge sprint at the end and picked up three or four people [at state], but she only ran three races the whole year, but they were all really good races,” Cramer said.

Barton was similarly satisfied with both her and the team’s performance at the state meet.

“I was just really excited to see how our team could do because this is what all the training has gone into,” Barton said.

Barton said she really enjoyed stepping into her role as one of the best runners on the team as just a freshman. She found racing and training with her high-level teammates to be a beneficial aspect for her season.

“This season has been really exciting and really motivating,” Barton said. “I like how deep our team is this year because I like to stick with all the Midtown runners in races. I think just with our team being really fast, it makes our practices better and our training, as well.”

Cramer highlighted another runner, junior Emilia Weinrobe, who had a significant impact on the team, despite facing adversity earlier in the season.

“I felt the worst for Emilia because she had a rough bout with Covid, but I think she came back strong; she made a big, big kick at the end of the state meet,” Cramer said.

In addition to Barton’s contribution as a freshman, Cramer said sophomore Cary Schroeder’s spirit helped the team succeed on the big stage.

“Cary was probably the most vocal at state about trying to get the team to think about the possibility of maybe even going higher than fourth,” Cramer said. “And the others, I think, by the way that they stuck together, accepted her challenge.”

For Cramer, having a deep roster made up of runners who all had their own special way of contributing to the team is what made this season one of a kind, and creates exciting prospects for the program’s future.

“I’m now starting to work on our award ceremony, which is almost as important to me as the state meet; so I still have a big moment left in the season,” Cramer said. “I’ve been doing this at this school for 24 years, and I coached for another 15 years before that at others, but this team means a lot.”