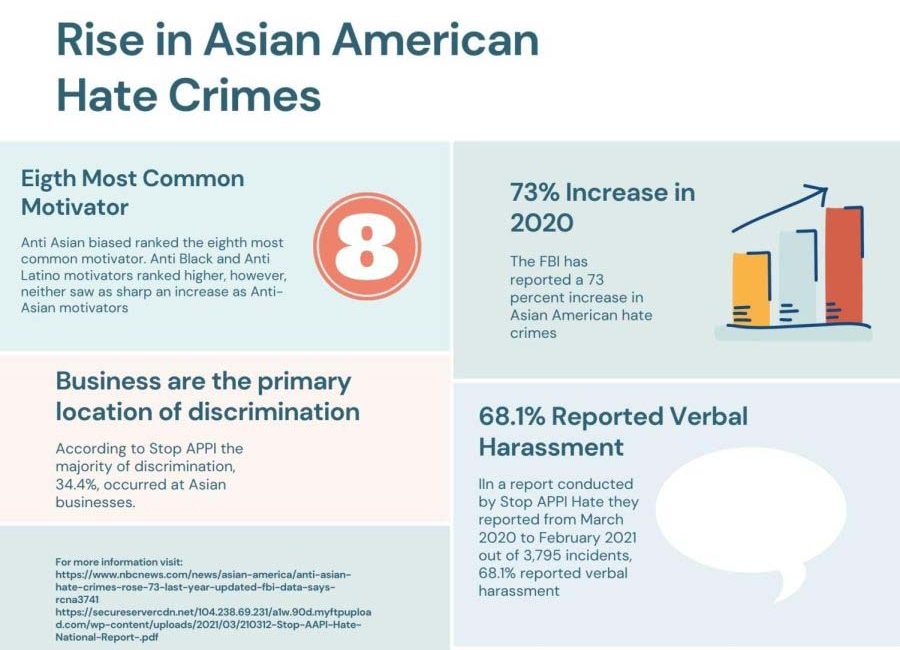 Throughout the COVID-19 pandemic, and even after the distribution of the vaccine, I have come to reckon with my race in a way I haven’t acknowledged before. Before the pandemic, being hated because I was Asian American never seemed overt. Sure, there were stereotypes and whispers, but I was content to ignore them—until last summer.

Overt violence has never been something that I’ve had to deal with as an Asian American living in the United States. My family and I have managed to find a community within the small density of Vietnamese-Americans living near the Atlanta area. It was easy to ignore the snide comments that came with my race because they were just words. It wasn’t until the summer that I, and so many others, were forced to realize that words in a country ruled by white supremacy weren’t just words; they were words that had the power to morph into unmistakable racial violence.

My stereotypes were never ones that would generate me as an enemy. As an Asian-American woman, I would be infantilized sooner than established as a criminal. I would be deemed submissive and subdued, and therefore not a threat. In some ways, my stereotypes have protected me from the overt racial violence that Black and brown people nationwide face everyday. My race has afforded me some amount of protection. But this protection is conditional. I will not always be protected. The assault of the Asian elderly, the defacement of Asian businesses, and finally, the violence that appeared in our very own city with the Atlanta Spa Shootings prove that white supremacy will always find a scapegoat. That it will always find a way for me to be at fault even when I am not.

These summer events, and the violence that began at the start of the COVID-19 pandemic, have shown me that words are not just words. They are expressions of damaging thoughts that have the capacity to morph into violent actions. These violent actions have shown me that the tools my parents taught me to avoid racially motivated violence don’t work anymore. My silence isn’t a way to save myself, but a path to stifle myself. Believing words were just words ignored the proliferation of ignorance and the intent behind them.

I, like many other Asian-Americans across the nation, have been forced to realize that even if we are able to find ourselves a community, we are still at risk. Silence in the face of racialized comments isn’t a way to protect myself, it’s an acceptance of my own oppression.

Being quiet isn’t an answer anymore. Not when Black and brown people are dying around us and our grandparents can be threatened for walking on the street and having slanted eyes. COVID-19 has forced Asian Americans to realize that our subdued and passive nature is interpreted as acceptance. Silence and passiveness are tools of a bygone era. While our parents used those tools to focus on raising us and building themselves up in a new world where their lives were dominated by their status as immigrants, we must live differently. We, young Asian Americans, have the education, the citizenship, and above all, the English to empower us in a way our parents were never able to.

We must use our voices to speak up not only against the oppression happening against our own community but also the violence that is perpetuated against other minority communities. Our protection has run out of time.