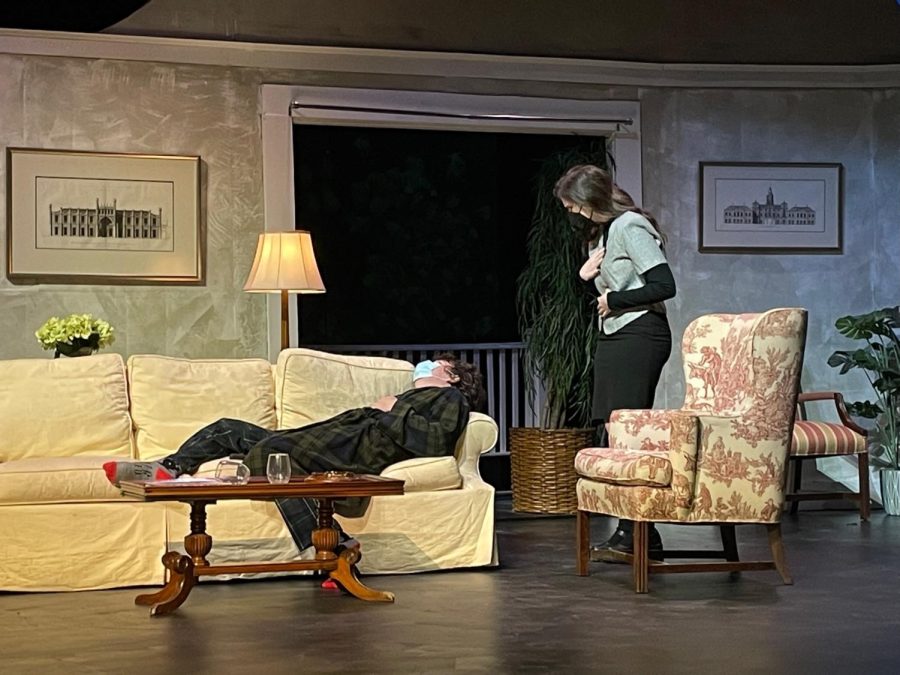 This is the premise of “California Suite”, the latest production by the Midtown Drama Department. The play, written by Neil Simon, focuses on five different couples staying in the same hotel room in California, during separate time periods.

According to director and teacher Lee Pope, the unique structure of the play allows greater safety for the actors and crew.

“The beauty of this show that I picked is that it’s four scenes with two to four actors in each scene,” Pope said. “Everybody didn’t have to be here every day. It was easy to quarantine groups and create pods…I’m trying to follow as much protocol as I can and still stay realistic.”

“California Suite” is Pope’s first in-person show with an audience since the pandemic began. Junior and stage manager Leah Braun had worked as stage manager in a previous show, but she had to deal with new challenges in staging the show due to Covid.

“Because the show that we are doing is all about a hotel, there’s a lot of eating and drinking, and [the show was written in] the seventies, so there’s smoking,” Braun said. “There’s a lot of stuff that we just have to work around.”

The show, which premered on Nov. 11, was shown to a live audience and performed entirely in masks. This was a major adjustment for senior Tui Brattain. Brattain plays Millie Michaels, a wife whose husband tries to hide his extramarital affair from, in the show.

“Acting with a mask on is very, very hard,” Brattain said. “You [have to] manage to be able to act and find ways to express yourself through your body language or having really expressive eyes.”

Though Brattain has needed to adjust to many changes in the show, one constant she’s observed is the openness of the drama department.

“It’s a very inclusive group of people,” Brattain said. “Doing a show that’s gender blind, race blind and entirely based off of acting and what you can bring to the show, is really something special. You’re not limited.”

Keeping with the attitude of inclusivity, Pope changed some of the show’s plot to include a divorced lesbian couple, rather than a divorced wife and husband, arguing about their child in the first scene, titled “Visitors From New York.”

“It happened so genuinely in the audition process,” Pope said. “I kept having guy-girl [pairings reading lines] and then two girls came in just to read because they didn’t have a guy to read with…I thought, ‘Wait a minute, this could be two guys, this could be two women, this doesn’t have to be a man and a woman.’”

Junior Isabel Neuman was cast as Billie Warren, one of the women in that scene. She thinks that Pope took an important step to normalize LGBTQ+ relationships on stage.

“I think it’s interesting to see that while we’re not a [heterosexual] couple, we still can go through the same kind of things that any couple would,” Neuman said.

“California Suite” is Pope’s last show at Midtown, after almost 15 years of teaching and directing at the school.

“We’re gonna see how emotional [this show] is for me,” Pope said. “It’s been a wonderful journey. I never thought I would direct theatre in my lifetime. I left New York as a professional actor, turned my back on the business, and went 10 years without doing any [theatre]. [When I came to Midtown] Ms. Willoughby said, ‘Hey, would you do the choreography for “West Side Story”?’ I did and we grew from there.”

Brattain has worked with Pope since being in his production of “West Side Story” during her freshman year.

“My freshman year, he [casted] me on as…dance partners with one of the leads,” Brattain said. “He had never heard of me, and he took that chance on me. I got more into theatre because of it, and it gave me the confidence to do other shows since then. I don’t think that I would have had the same experience if he hadn’t done that. I’m really grateful that I’m in his last show, because that was really important to me.”

Despite the pandemic, Brattain is excited to be back to performing.

“With Covid, there’s been challenges,” Brattain said. “But anyone who really, really likes acting likes challenges.”