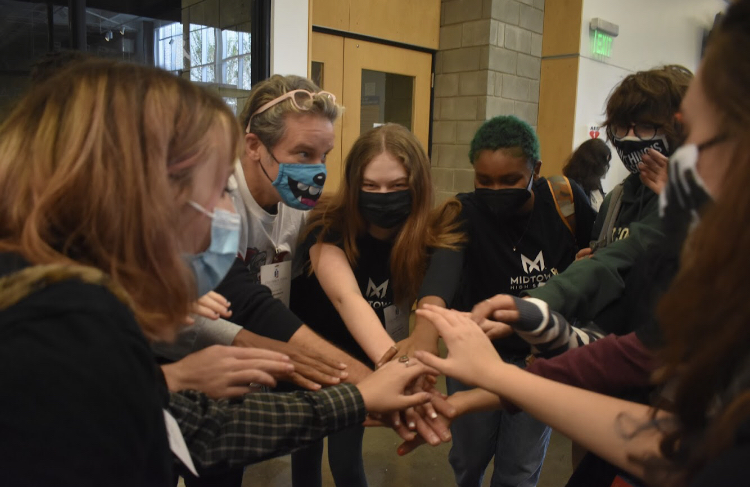 Students Malori Switzer, Addie Halloran, Ifama Frazier, Isabelle Perry and Aisling Mahony (from left to right) gather around John Brandhorst for a pre-competition pep-talk. "The competition required me as a teacher to become a coach, I had to connect with my students in a different way," Brandhorst said.

While many consider the quality of art to be subjective, Atlanta’s Interscholastic High School Art Competition, known as the Art Throwdown, says otherwise. With nine teams representing schools from across Atlanta, students engage in a series of art competitions including welding, preformative arts and ceramics. This year, Midtown won first place overall.

Since its first competition in 2005, the Art Throwdown has been an opportunity for students to gain hands-on experience in artistic competition. Head of Midtown’s Art Department John Brandhorst, alongside artist and educator Jeff Mather, developed the program with the intention of providing students with opportunities for competition.

“The first competition was only between two schools just to test drive it,” Brandhorst said. “Since then, that paradigm has spread out nationally. This is something that’s caught wind all over the country and states even have different versions of it.”

Realizing that almost all other school activities, both curricular and extra-curricular, had interscholastic competitions, Brandhorst questioned why art did not.

“Imagine all the money they spend on buses and uniforms and everything for sports. Why doesn’t art have that same kind of support?” Brandhorst said. “We knew we needed to make it into a sports event; set a clock; then judge it and give points. That’s how it began.”

While many students had some background in their areas of competition, several did not. Junior Ifama Frazier started this year as a beginner in ceramics. Like any sports event, practice is needed to succeed. Frazier practiced wheel throwing, a method of creating pots, every week up to competition and found herself placing first in the event.

“I had thrown clay a couple times before so when Mr. Brandhorst asked if anyone had any experience, I raised my hand,” Frazier said. “He told me about the Throwdown and since then I have practiced two days a week in preparation. I honestly didn’t really know what I was getting into.”

Not only did Frazier quickly pick up the techniques needed to excel in ceramics, she also discovered a new passion for pottery.

“There are good days and bad ones,” Frazier said. “The two days before the competition happened to be one of my two of my worst days when it comes to clay, but because I had found a love for the art I didn’t give up and put my all into the competition.”

Similar to sports, teamwork is key to success. The performing arts competition – consisting of a 30-second video recording of dance – involved a team of three, all students who had never participated in a competition like the Art Throwdown.

“The point of the category was to perform in the creation process,” junior Aisling Mahony said. “It really was unlike anything I have done before. We felt really good about it and took the performance to heart. We thought that a lot of people made gorgeous finished project products, but ours really had the performance aspect of it.”

Many students found themselves unsure of their chances of winning due to inexperience. However, students scored high in every category. Junior and dancer Addie Halloran, an inexperienced competitor, participated in the performance arts category and earned second place.

“I’ve never competed in anything before, let alone a sports competition,” Halloran said. “This was my chance to dance for someone besides my teacher and I really put everything into it. It was something new but so rewarding. Who knew we would get second place.”

Through the Art Throwdown, art students wishing to experiment new things and show off what they know were given the opportunity to do so in a competitive yet collaborative environment.

“Any chance for artists to get out and work with or compete against their peers is highly rewarding,” Brandhorst said. “Some people say that you can’t compete with art. Of course you can. Every single other aspect of school has some kind of competition, quiz bowl, debate everything, right? We deserve that head-to-head too.”