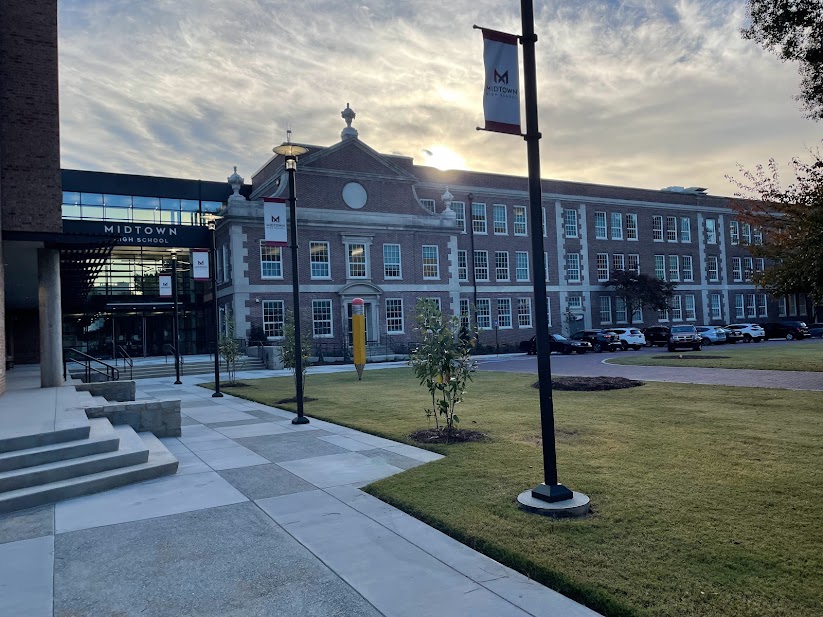 After its renovation, Midtown has increased its beautification processes.

The smell of fresh paint and trimmed grass greeted Midtown after construction and renovations occurred.

With its recent renovations, including the addition of a new building and parking lot, Midtown has made advances in the beautification of the campus. Improvements from previous renovations, such as art pieces and landscaping have not been maintained, causing many to call in to question the longevity of the new developments.

In the past, the Parent Teacher Organization (PTO), grants, the Parent-Teacher-Student Association (PTSA) and other organizations have raised money to maintain the school grounds because that maintenance is not usually covered by the APS budget.

“Beautification was never a part of the budget,” former Midtown PTSA President Alexandra Coffman said. “We always had to rely on the PTO or the PTA back in the day. Through the years, we’ve had great parent volunteers who have come in and helped out. We will have to continue to have volunteers, clean-up days and things like that to keep it going.”

As of now, some students said they are impressed with the appearance of fresh landscaping and the addition of the new building, or the A-wing, of the school and said they hope that it stays that way.

“I’ve noticed that the school seems a lot more clean and polished,” junior Nadia Thurston said. “With the new building and all the new plants, the school looks really new and nice, compared to how it was when we were last at school.”

Elements of beautification, such as murals and other artistic pieces, have previously suffered because of lack of maintenance. Students are finding new opportunities to get involved with the process.

“We have to replace a lot of murals that were destroyed in the renovation because the walls don’t exist anymore,” art teacher John Brandhorst said. “So, right now, the art club has a mandate to create new murals for the lower courtyard and around the school.”

This recent construction project isn’t the first time Midtown has experienced a renewed effort towards beautification. After its renovation in 2005, similar efforts were made to preserve the grounds.

“A lot of the issues with maintenance are due to the evolving actions of other groups,” language arts teacher Lisa Willoughby said. “It was really hard during the 2005 renovation where we didn’t have control of the campus because we were coexisting with the construction people. That much traffic did a lot of damage to some of the spaces. During this most recent renovation, it was easier to maintain soil and plants without students being there. I think anytime you have a major renovation project, you’re going to lose some of what was there before.”

Willoughby believes there have been calculated decisions made with the recent renovation to prevent problems from  the past.

“I think they’ve made some good choices this time around,” Willoughby said. “After the 2005 renovation, the front entrance was paved in a way that created an encircled concrete area that flooded all the time. It was just not a workable or beautiful space. I think they’ve been more intentional about the ways that [the construction crew] have placed things and made it a way that it is going to be easier to care for.”

Brandhorst believes students also play a key role in the upkeep of the school by being considerate of the environment around them. With the resurfacing of the Earth Club, students can actively take part in creating a more sustainable campus, he said.

“There is an Earth Club here at school, but it’s not the yard maintenance club,” Brandhorst said. “I’ll be interested to see what that group does.”

With the issue of funds for the process of beautification, Midtown faculty is hoping they will have the funds to provide a clean environment for all faculty and students.

“Right now, we want to get the school system to ante up for as much as it will pay for,” Willoughby said. “There are some different funding sources that we can tap into. The [Midtown] foundation has some money that comes in as a part of the auction. We are fortunate to have a faculty member like John Brandhorst who is continually involving students to have engagement with the space.”

Coffman does not know how the matter of maintenance will play out, but hopes the community will be able to work together to keep Midtown clean and beautiful.

“The maintenance teams are usually busy with internal stuff,” Coffman said. “I guess we will have to come up with some kind of plan whether it be with the PTA or with community organizations that can help us.”