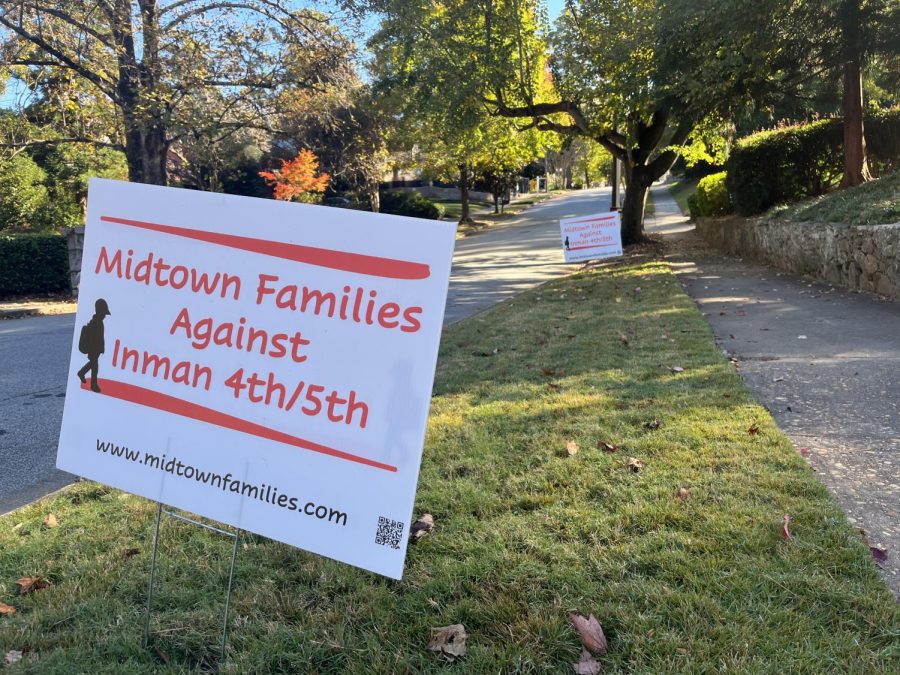 The announced recommendation to convert Inman Middle School into a fourth and fifth grade academy has created controversy among parents and teachers.

Responding to overcrowding concerns, Atlanta Public Schools is recommending the former Inman Middle School to be converted into a fourth and fifth grade academy in the fall of 2023.

The announcement prompted backlash from parents and teachers.

“The APS proposal of the fourth and fifth academy does not solve the capacity issues because it would be overcrowded in five years,” said Jennifer Palmer, a Midtown cluster parent and leader in the movement against the academy. “In five years, you will just have to come up with another solution, which hopefully isn’t to stuff all the students in portables. So, that’s a problem.”

Springdale Park opened 10 years ago to alleviate overcrowding at Morningside, according to school board member Michelle Olympiadis.

“At the time, APS told the Druid Hills community that [Springdale Park] wouldn’t go past 450 seats,” Olympiadis said. “Within five years, they had to expand the school, and it doubled in size. It has 800 plus seats now. Now, it’s overcrowded, and Morningside is overcrowded.”

After the announcement of the proposed fourth and fifth academy, 12 parents got together to protest the decision. The Facebook page, “Midtown Families Against Inman 4/5,” has 300 members and a petition has over 820 signatures. The group has distributed yard signs for neighborhood residents. The parents believe the academy will not solve the capacity issues, and that it will create new problems.

“The intent was to bring all the schools together to say that this is too much,” said Ben Nemo, a Morningside parent and leader in the movement against the academy. “There’s not enough information; it’s not what we asked for; you have no proof this is good for our kids; so, please put on the breaks and give us the time to work together to come up with something that is good for kids.”

“The academy is illogical; it does the worst job at addressing the capacity issues,” Midtown cluster parent Laura Freitag said. “It also requires busing kids from all over the cluster to this one building, which means a lot more time on buses for these kids. It means that we need seven more bus drivers and buses, and we already have rampant bus issues.”

Morningside started a kindergarten annex in 2018 at the Metro City Church to alleviate its overcrowding. Nemo described the fourth and fifth academy as “the last straw.”

“I’m a parent of a third-grade student at Morningside; so, I’ve already been through a lot of changes,” Nemo said. “She had to go to the kindergarten annex; she came to Morningside in first grade, then second grade mostly virtual, and now third grade at Inman. So, she’s already gone through so many transitions. And the sad part is that I invested in this neighborhood where I hoped to keep her for a while.”

If approved, the district would delay the start of the academy from fall 2022 to fall 2023. Palmer said she is relieved the fourth and fifth academy will be delayed but there is more that needs to be done.

Palmer is the lead researcher for the movement and has compiled a bibliography of academic sources that covers the issues brought by the academy.

“The first thing I started to look at was the effect of changing schools on children’s learning,” Palmer said. “It seems that changing schools has a negative effect on their social-emotional learning, including their self esteem, motivation and performance, and a higher number of transitions, even at an elementary level can lead to a higher dropout rate. This is something that has a lasting effect.”

Nemo described the academy as “a lower middle school when you suddenly put all those kids together.”

“We’d like them to retract it and go back to look for new creative solutions that will address the capacity concern,” Nemo said. “When it ignores parents and doesn’t really address the long-term solution, and there are no proven benefits to this academy. We want a different approach. There is a lot of research that says it can lead to reduced academic performance; it can lead to decreases in self esteem, and it can lead to increased bullying.”

An additional proposed solution from the district is transforming Inman into an elementary school with kindergarten through fifth grade. Midtown Cluster parent Elizabeth Adams prefers the fourth and fifth grade academy over the K-5 school.

“I have twin 4-year-olds and a 7-year-old who is going on 8, so with the K-5, we could keep all of our kids together, but I would rather have them in a school that has diversity,” Adams said. “So if they create a K-5, then it will just be white, upper-middle-class kids and families. And I just don’t think the kids will be exposed to people of various backgrounds until they get to sixth grade. I find it really problematic that people just are not concerned about equity in terms of education.”

As a student, Adams attended Morningside, Inman and Grady and described her time as a “really amazing, urban experience.” She also believes the additional transition before sixth grade will be beneficial.

“Going to inner-city public school, we had a lot of experiences with socioeconomic diversity; so, it wasn’t just about racial variation, but it was differences in income and class,” Adams said. “I would be happy if the fourth and fifth academy does happen. I also think that Howard Middle School has had some difficulty, but this academy would allow the whole cluster to come together earlier to create bonds that they’ll have until 12th grade. I see it as a win.”

Morningside fifth-grade science teacher Val Taylor will be flexible with the fourth and fifth-grade academy because she trusts that everything will work out in the end.

“I will take anything that anybody throws at me and make it the best that I can make it to be,” Taylor said. “I think that there can be beauty in both ways however this works out. I think if you have a great attitude and you can hire great teachers to teach these kids in both dynamics, it can be a beautiful world.”

Taylor has been teaching at Morningside for more than 20 years, and her experience brings her hope for the future.

“I’ve seen things change; I’ve seen principals come and go and superintendents come and go, and I’ve stayed a very long time,” Taylor said. “It all seems to work out. I look forward to any decision the higher-ups make. I’m in for the long haul.”

*The first version of the story said Atlanta Public Schools is creating a 4th and 5th academy at the former Inman Middle School. That information was incorrect. The district is recommending converting the building, but the school board has not voted on the issue.