A new name and direction 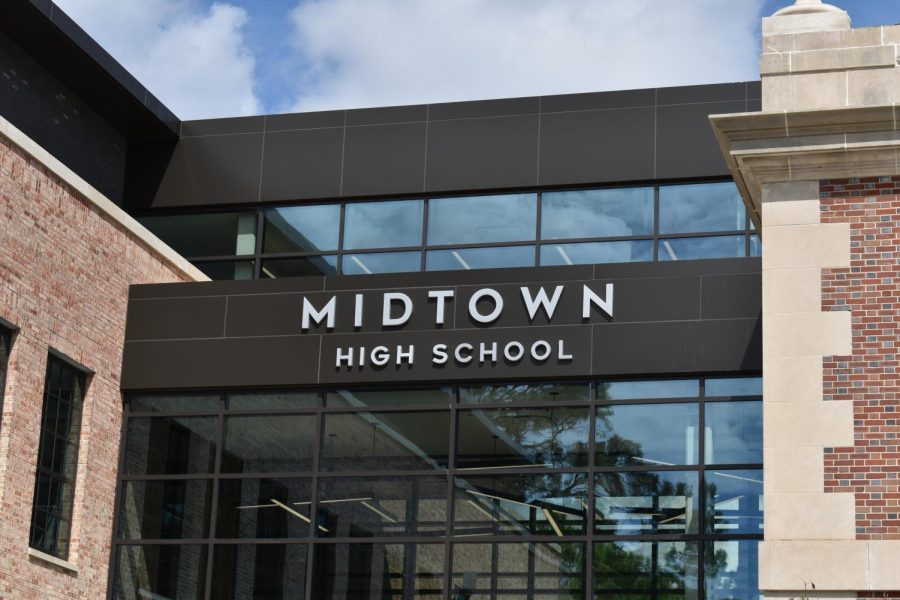 Midtown's visual redesign was undertaken by Art teacher John Brandhorst, with the help of Midtown parents and professionals.

After a year and a half of virtual school, students returned to a school with a new name. The name change of Henry W. Grady to Midtown and the subsequent rebranding also marked a turning point in the school’s history.

In 2019, a group of about 200 Grady students submitted a petition to the school board seeking a new name because of the white supremacist views that Grady expressed in speeches. He was editor of the Atlanta Constitution and died in 1889. In the fall of 2020, Midtown sent out a survey where students were able to choose a name from select options, which included Piedmont, Freedom, Ida B. Wells, Dr. Thomas E. Adger and Midtown high schools.

Once the school settled on a new name, art teacher John Brandhorst, who chaired the Identity Committee, led the effort to develop the new logo and visual identity for Midtown. Brandhorst helped establish a coalition of parents and professionals, both graphic designers and corporate brand specialists, for the Identity Committee, to develop a new vision for the school.

“We dismissed ideas that were too common, or that didn’t fit with the aesthetic we were trying to create,” Brandhorst said. “The final logo was a function of those conversations, about Midtown being in the center and how it’s an intersection of lots of different kinds of people — that intersectionality.”

Karri Hobson-Pape, a Midtown parent, served on the Identity Committee for the school’s logo. While the committee focused on the big picture aspects of Midtown’s rebranding, its goal was to create the graphic identity everyone will see — the new Midtown logo. The committee made sure that the logo met five guiding principles: distinctiveness, authenticity, functionality, flexibility and recognition.

“I’m very pleased with what we landed on,” Hobson-Pape said. “I think it speaks to what makes Midtown High School special. A visual Identity represents a story, and this narrative reflects the power of intersection, of so many different aspects coming together.”

Senior Everett Stubin was a fan of the name Midtown and is pleased with the renaming of the school.

“The name ‘Grady’ was definitely holding back some people’s pride for the school because of the history it held,” Stubin said. “Midtown is a good name that almost anyone can get behind.”

Junior Neisha Ball agrees the name change ushered in a new time for the school and community.

“I think it is simple, catchy and will bring about a new era that will allow lots of positive changes for the school and community,” Ball said. “Given that the school is so close to downtown and such an intersection of different demographics and groups, it’s really important that it does not reflect anything negative or insensitive towards anyone.”

While Midtown’s rebranding is obvious around the school — from the new logo to the new name — there are aspirations that it will result in a cultural shift that goes beyond the school’s new visual identity, math teacher Laketa Scott Blue said.

“I’m hoping that the rebranding of the school will go beyond the name,” Blue said. “The new name allows us to present ourselves differently. I think the name will wash away the stigma that was there. I do not know if it is going to bring about systemic change, but at least people will not think so much about the name that we had.”

Some students believe the rebranding is largely symbolic and does not affect the way people in the Midtown community think and feel.