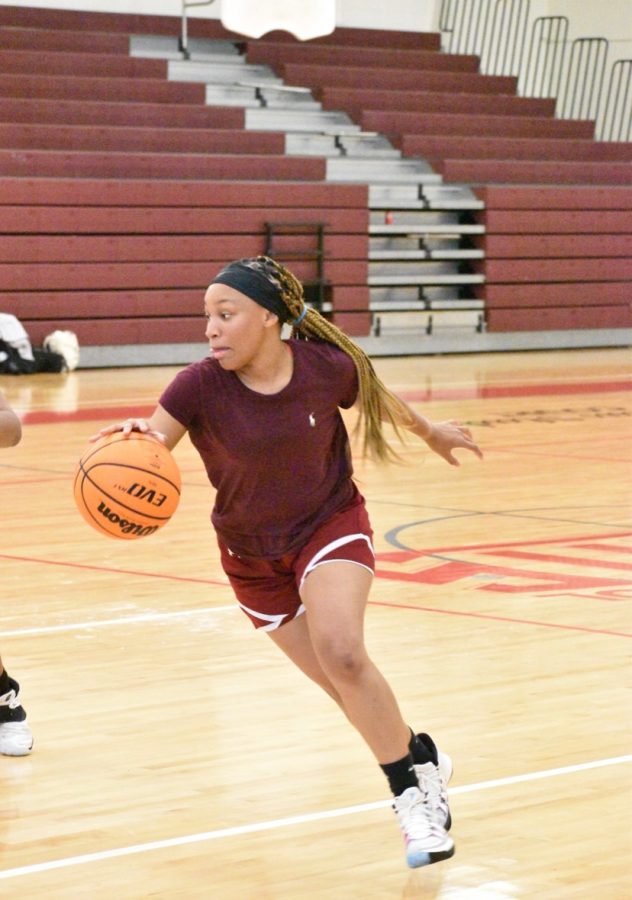 Senior Megan Nunn focuses during basketball tryouts as she eyes the basket before making a shot.

Football is a staple for high schools across the country, but the lack of a varsity team at Midtown this year created the space for other sports to gain popularity.

Friday nights are no longer spent at football games; so, students and staff are getting behind other sports teams to unify the school. Fan support for basketball, for example, is likely to increase this year since the sport will host the homecoming game on Dec. 4, according to Student Government Association Executive Council President Aaliyah Rapping.

“There will be a spirit week leading up to the homecoming game, as well as some activities before or after the game to boost school spirit,” Rapping said.

Junior guard Dylan Gustafson said he has high hopes for the anticipated support for the upcoming season.

Because of COVID, fans were not allowed at basketball games last year, according to girls basketball head coach Dana Smith.

“Not having fans at home last year had a big impact because our girls would go to away games and have to face the opponents’ fans, and it was very tough,” Smith said.

However, the lack of fans last season did not hold the girls back in any way, as they finished in the first round of the state playoffs.

“Momentum and energy from the fans impact us, but we have a strong and talented group of girls that pushed through and leaned on each other for support and energy, which helped out,” Smith said.

“Having fans in the gym affects the mental game a lot,” Wilson said. “It’s easier to focus [without fans], but there is less hype, and no one is cheering you on, except your own team.”

Similarly, Smith acknowledged the power of having fans at games.

“We feed off of energy, given that [basketball] is an indoor sport,” Smith said. “It becomes personal when the fans are right there with you. Every play, you are being watched and the spirit, energy and momentum is all there, and it’s what we live for.”

Packed stadiums can take some practice getting used to, which sophomore boys basketball player Charlie Kane has.

“I’m pretty experienced with crowds because of the competitive tournaments I participated in this summer,” Kane said. “I’ve played in a lot of crowded gyms and picked up good techniques to deal with pressure.”

Kane cited confidence as being key to dealing with the pressure fans and opposing crowds bring to games.

“Confidence is really big in sports,” Kane said. “You can have all the talent in the world, but with no confidence, none of that talent can be expressed.”

However, not all athletes maintain a high-level of confidence, which can cause them to struggle when students, teachers and friends are watching them play.

“For me personally, [having fans] makes me a little anxious because I am worried about all the mistakes I’m making, but overall, I think it will help the team get energized and hyped up,” Wilson said.

Smith said the benefits of having fans outweigh the costs.

“I always tell my girls to outwork me, and now they have to outwork me and the fans, which is something we’re excited about,” Smith said.