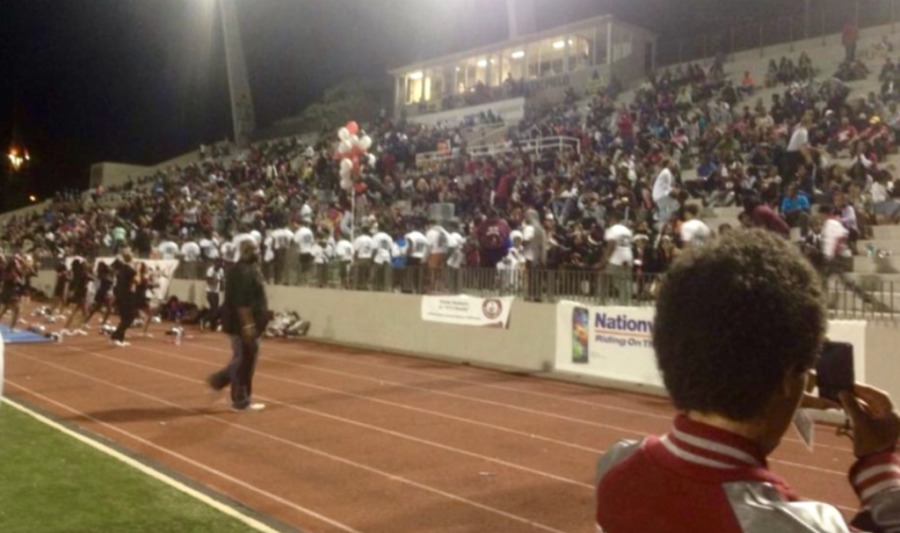 In past years, alumni have been present at homecoming, such as in 2014. Recently, alumni participation has dropped significantly.

The name says it all: Homecoming, a time for alumni to come back to their former campus and reunite with people from their graduating class. However, in recent years, alumni participation surrounding homecoming festivities has dropped significantly.

Some homecoming activities include the annual Homecoming football game and dance, which typically take place in mid-October. Grady Class of 1989 alumnus Dianne Doss has been to a few Homecoming games, and said the games are not advertised to alumni as much as they should be.

“Homecoming for alumni is something that’s not driven by the school, and I think that’s one of the problems we’ve had,” Doss said. “It’s more, a couple friends get together and say, ‘hey, let’s go to the Homecoming game just because it’s the Homecoming game.’ It doesn’t feel like in the movies where everybody is coming in to watch the game together.”

For Homecoming, alumni are not notified about these events happening or that they are welcomed and encouraged to come. In years past, the only way alumni were notified is through the alumni information grapevine.

“I think a lot of it has to do with [the fact] there’s just no notification to alumni,” Class of 1991 alumnus Susan Ruhl said. “There’s no invitation; there’s nothing set up for them. When I think about colleges, you’ll get all kinds of notifications and this is all the activities for alums. There’s nothing like, register for your class and you can see who else is coming [with Grady].”

When alumni do go to the events, they mostly attend with people they stayed friends with after graduating, making Homecoming less about reuniting with old classmates they haven’t kept in touch with.

“When it’s going with friends, it’s like, I’m gonna see these people that I already see,” Doss said. “The people that I ended up going to the football games with were people that I was already doing things with often. Whereas, if it was the school inviting all the classes back and we’ve got people from here and there, you might get to see some of the people you don’t normally see, a sort of college-like reunion type of thing. I think it would be more of a draw if it was coming from the school.”

While some classes have strong reunions, others don’t and Homecoming could be the only time alumni can see each other and without that, more distant classmates can lose contact.

“It’s very different for colleges and even the school I went to for grad school, I get all kinds of things about Homecoming,” Ruhl said. “Unless you had a really strong president of your senior class who organizes reunions, you don’t really see those people. My class didn’t have a strong president; so, we’ve never really had a reunion. You only see the people you maintain relationships with.”

The way current students perceive Homecoming also plays a role as to why many do not know that it’s a time for alumni to come back to campus.

“Homecoming is where we all come together as one and have fun,” sophomore Nhyasia Williams said. “It also involves a parade, or a big football game, like a match up against your school’s rivals.”

Because Homecoming at Midtown isn’t centered around the return of alumni, it causes many students to lack knowledge of the true meaning behind it, which is the tradition of welcoming back alumni to campus.

“I was pretty surprised to hear that Homecoming is all about celebrating alumni because that’s never really a big part of it,” junior Mia Otoski said. “I don’t remember seeing any alumni last Homecoming. There weren’t any activities or events that revolved around them, which is sad because they don’t get a lot of recognition or big reunions after they graduate.”

Even as students, current alumni did not see a large amount of alumni attendance at Homecoming games.

“I don’t think even when I was a student there was any type of strong alumni presence in the stands, during the games,” Doss said. “It was definitely, ‘there’s the students down there and they’re running around and in their groups, chatting with each other, and we’re sitting over here.’ So, there’s not like anyone was saying, ‘hey, here’s the alumni, come meet them.’”

The lack of alumni at games has been apparent in past years. With an absence of alumni activities and notification, many have disregarded the school’s celebration post-graduation.

“Percentage-wise from my class, probably 20 percent [have come back during a Homecoming], and it was probably mostly from when we first graduated,” Doss said. “[The alumni that went back were] mostly people who were already going to the games when they happened as students, so football players, people on the drill team or in the band and sports photographers for the newspaper.”