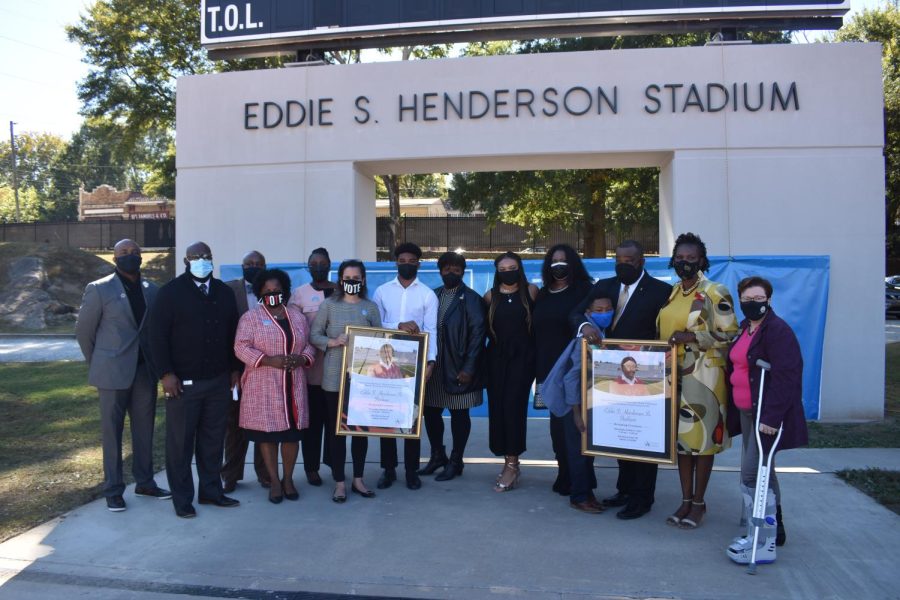 Family members and friends of Eddie S. Henderson are joined by APS administrators and board members at the stadium renaming ceremony.

Atlanta Public Schools administrators and board members joined family and friends of the late Eddie S. Henderson as the district officially renamed Grady Stadium to honor the former coach and administrator on Oct. 27.

The board voted unanimously in February to rename the Grady Stadium to Eddie S. Henderson Stadium, but the ceremony was delayed due to the Covid-19 pandemic. Though later than expected, attendees thought the renaming was a great way to honor Henderson’s legacy.

“With the history, legacy, and what he meant to this community, it was only fitting that we would name the actual stadium,” Jasper Jewell, APS athletics director, said. “Ten years ago, we renamed the field after him; so, now to carry that legacy a step further, we are blessed and fortunate now to name the entire facility after him; so, I’m just thankful for that opportunity.”

“I am very reflective of the initiative of renaming Grady to Midtown, with the thoughtful partnership of students and scholars,” Dr. Herring said. “So, the intersection of today, where we celebrate the renaming of Midtown to best represent what students believe, was important, in addition to holding onto and also celebrating history with the renaming of the stadium of Eddie S. Henderson.”

“With him being an African American, he set the path for others, going from being in a classroom, being coaches, to being effective administrators,” Jewell said. “He then took his skill set into athletic administration where he flourished as an athletic director, which is why I stated earlier, ‘I stand on the shoulders of individuals like him and Walter Wade (also a former APS athletic director),’ because they paved the way for us African-American administrators, and he’s done a tremendous job.”

Junior Jordan Taylor, an athlete who’s played football and is also on the track and cross country teams, delivered a speech honoring Henderson, including his time at Grady, Archer and Carver.

“It’s a really big honor, and it means a lot to me to have someone to look up to, and know all that he’s accomplished,” Taylor said.

Henderson’s family, including his daughter, son and grandchildren attended, as well as former Grady coaches and administrators.

After three decades of public education and service focused on improving school quality district wide, Dr. Herring and the school board said Henderson was the perfect person to name the APS stadium after.

“What makes APS unique?” Dr. Herring said. “Leaders, coaches, educators, and then this place where Eddie S. Henderson was the first African American to take lead in the athletic realm. It is more than appropriate. I think [the renaming] is a testament of how important it is to acknowledge our history and be able to intersect that with the future and show that we can all be legacy builders.”