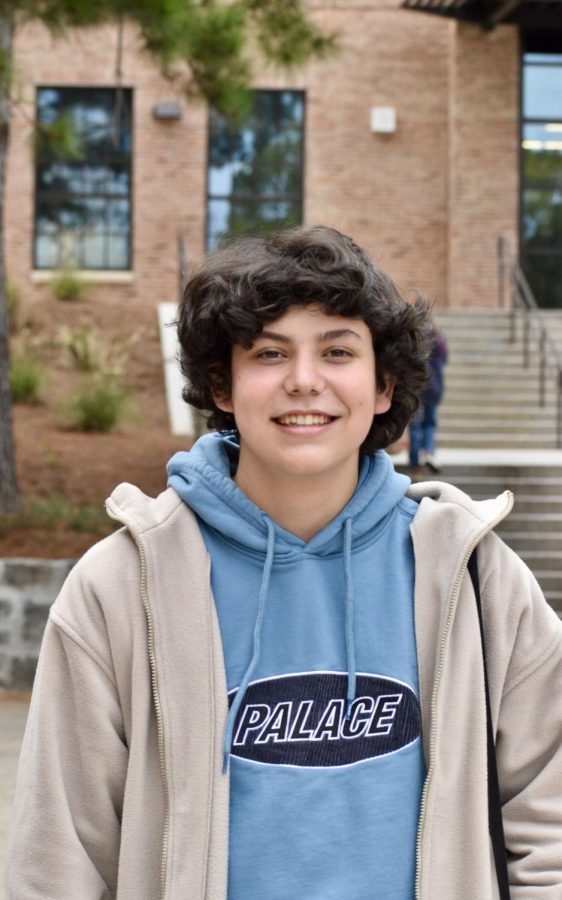 Junior Esteban Vangioni sets out on an experience of a lifetime. Vangioni is a foreign exchange student from Madrid, Spain, who is seeing the world from an American view for the year. Vangioni is a member of the robotics team and will also participate in tennis during the spring season.

At only 16 years old, Esteban Vangioni ventured across the Atlantic to fulfill his global dream. Following in his brother’s footsteps, he packed his bags, said goodbye to his family and friends in Spain and embarked on a high school experience like no other — the American way.

“This was my first time traveling alone, and I had to make a connection from Dallas to here without being able to call my parents because I didn’t have a SIM card, which made me a little anxious,” Vangioni said. “But once I got to Atlanta, I was way more excited than nervous.”

Many high schools and universities around the world offer foreign exchange programs. These programs allow students to travel to foreign countries to live and study abroad. Students live with host families and attend local schools.

Vangioni is from Madrid, Spain. He’s found that Atlanta is more ethnically and racially diverse than what he’s used to in Madrid. In the two months he has been here, Vangioni said he is enjoying the classic American experience for all it has to offer.

“In Spain, you don’t get to see much diversity of cultures,” Vangioni said. “I am kind of isolated in Spain from that stuff. I think that Midtown High School is a perfect example [of the different cultures].”

Vangioni is no stranger to the U.S. In 2019, his older brother, Antonio, used the same program, with the same host family, to travel to Atlanta for the year. Antonio also attended Midtown during his stay.

Vangioni said he wanted to immerse himself in the American lifestyle, instead of just traveling to the country as a tourist.

“I can get a full experience of what life in the United States is like,” Vangioni said. “Also, for the language of English, knowing it and perfecting it.”

Like Vangioni, sophomore Carmen Pajares Ruiz-Villar is also from Madrid. Like many exchange students, Ruiz-Villar went through a long, seven-month administration process to get accepted into the Critical Language Scholarship Program.  CLS is the Spanish agency, and it transfers to another program located in America,  the International Student Exchange.

“I had to fill out questions about myself, about my family, about my situation, and then [the program] took a long time for the information to get here [the U.S.], and for the [host] family to pick me,” Ruiz-Villar said.

Like Ruiz-Villar, Vangioni said the application process was long because many details had to be covered.

“It usually starts a year before going so that everything is fully prepared,” Vangioni said. “It’s not a really difficult process, but a lot of things have to be covered, like medical forms and all of your grades to be accumulated from Spain to here.”

Ruiz-Villar said previous COVID lockdowns in the past year sparked her interest in participating in CLS.

“I had just been under quarantine lockdown,” Ruiz-Villar said. “I just want to get out of here and see something different, I was bored, and I thought this would be a cool experience.”

Sophomore Ana Luiza Duarte Santos is another foreign exchange student at Midtown. Santos came to America from Brazil (5,437 miles) and said the farthest she had traveled before coming to America was from Brazil to Panama (2,478 miles).

“It’s been hard to be away from family and friends,” Santos said. “I am so far away, and I can’t just hug them or talk to them face-to-face if I get sad.”

Vangioni said the most arduous part of being away was after the first month, not during. Despite this, he is trying to enjoy himself and the experience.

Vangioni is enjoying the various clubs and after-school extracurriculars Midtown offers. He is involved in the Robotics Club and will be on the tennis team in the spring.

Though being in a foreign country can be hard, it is also an experience that Vangioni, Santos and Ruiz-Villar will never forget.

“I think that if I only think about the life I have in Spain and keep missing my family or what might be going on there, then I won’t get the same complete experience that I came here to get,” Vangioni said.