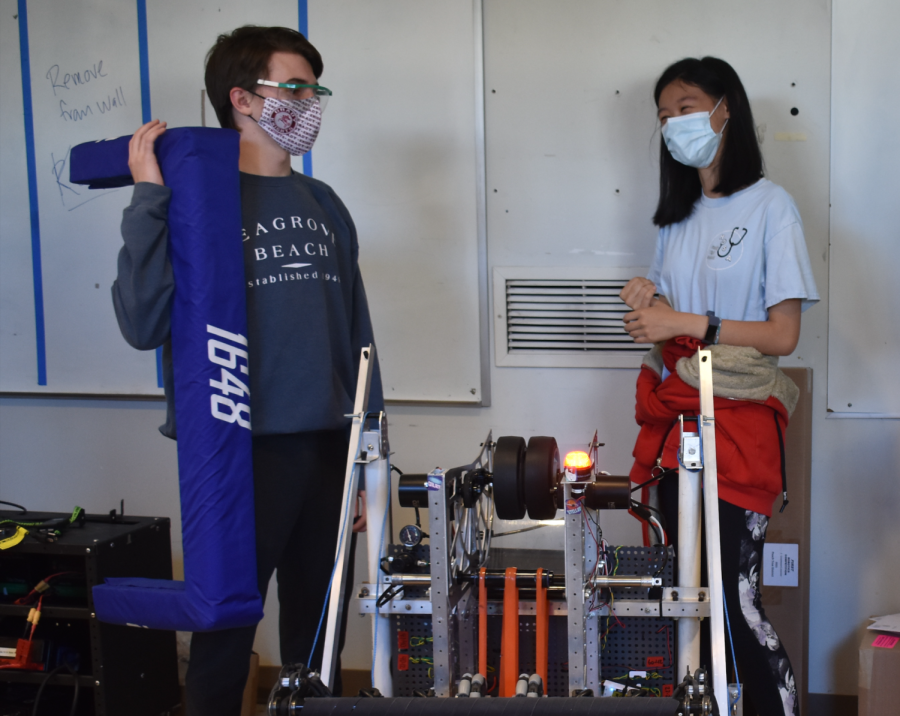 The change comes after Atlanta Public Schools renewed its charter with the Georgia Department of Education. The charter must be renewed every five years and requires all APS high schools to have a signature theme to develop their programs and curriculum around.

Under the charter, these themes must be accredited by a qualified body to ensure schools are meeting official requirements. College and Career Readiness can no longer be accredited because the accrediting body, Battelle, is not currently certifying programs due to an internal restructuring.

“In late June, the Midtown principals were asked to be in a Zoom meeting with the chief of schools and my direct boss and the CTAE person,” Principal Dr. Betsy Bockman said. “We were told that the accreditation for college and career is no longer applicable, so we have to change our signature theme to either STEM, STEAM or IB [International Baccalaureate].”

The signature theme was narrowed down to either STEM or STEAM once IB was ruled out by the administration.

“IB would have been very disruptive to our school because IB and AP are like competing ways of building out your high school curriculum,” said Christopher Rhodenbaugh, a teacher on the school governance GO Team. “STEM or STEAM would be the least intrusive to what we’ve already got established.”

The STEM or STEAM theme will primarily result in changes in Midtown’s curriculum.

“With STEM … you’re trying to infuse the principles of science, technology, engineering and math in the curriculum; so, we’ll have to see how that rolls out,” Dr. Bockman said.

The information was released to the rest of the Midtown community, including the GO Team, during the Sept. 7 school board meeting.

“We did not realize that our signature theme had changed,” GO Team teacher representative Susan Barber said. “Teachers started getting messages from different parents saying, ‘Hey, that signature theme change for Midtown — they’re now a STEAM/STEM school — what do you know about that?’ and we’re like, ‘We have no idea.’ Then several of us started tuning in to the board meeting.”

Although the principals were given some information earlier in the year, Dr. Bockman was also caught by surprise at the announcement.

“When we were informed in June and July, we were asked to let the process play out; [for] community involvement [and] those kinds of things, to just let the district kind of do what it needed to do as far as communication and starting the engagement communication,” Dr. Bockman said. “The principals didn’t really share that. I didn’t share that with anybody because I didn’t think it was a done deal. I was surprised that it was announced completely. I didn’t know that was on the agenda.”

Mario Herrera, a previous GO Team teacher representative,  was a member of the GO Team when the original College and Career Readiness signature theme was chosen and was involved in the process. The lack of communication between district officials and the Midtown community has been frustrating for some teachers, he said.

“I think it was sneaky,” Herrera said. “Talk to us. This is our school, and we’re proud to be a part of Atlanta Public Schools, and one of the things that’s always made us strong is that we work together as a community to do the best that we can with what we have. To completely ignore years of work is infuriating, a little sad, and, on some level, I think it’s unacceptable.”

In contrast, the process for choosing the previous signature theme, College and Career Readiness, involved extensive community engagement, according to Herrera.

“It wasn’t a long process, but it was an engaging process,” Herrera said. “No decisions were made until community input was given, and the community was the one that said we need to go with college and career.”

According to APS’s plan, Midtown will begin seeking community input about implementation after the signature theme is decided. However, Midtown administration has not been presented with any options besides switching to a signature theme of STEAM or STEM. Rodenbaugh believes the issues concerning the theme are part of a larger communication issue. He says the district’s current model of community engagement seems to gather input only after the decision is made.

“There was that decision to move start times way earlier for high school, and then community engagement again was about explaining those decisions, but then, that switched to getting input,” Rodenbaugh said. “It does seem like there’s a trend forming of making a decision, and then getting a lot of backlash, and then having to change that decision.”

Atlanta Public Schools could not be reached for comment.

“We’re going to still continue to do the really good practices: all the college visits, all the college prep that we do,” Dr. Bockman said. “In March, I hired a part-time person, Ms. [Emily] Kotzan, whose job is to really flesh out the career part of that college and career [with] students that don’t want to go to college right away, they want a real job … It’s really important to me that everybody has opportunities to do different things.”

Implementing the new theme will require new funding throughout the cluster for training and new personnel. According to Dr. Bockman, a new person will have to be hired for every school to implement STEM and STEAM throughout the cluster. Previously, the schools each paid for a fraction of the salary of a single individual for College and Career Readiness.

Rodenbaugh said different stakeholders should be included in the process moving forward.

“GO Teams are underutilized, in my opinion,” Rodenbaugh said. “Inevitably, energy is going to boil over if the approach is ‘make decisions, tell everyone about it’ versus ‘talk to people, make informed decisions based on a balance of district expertise and community engagement.”