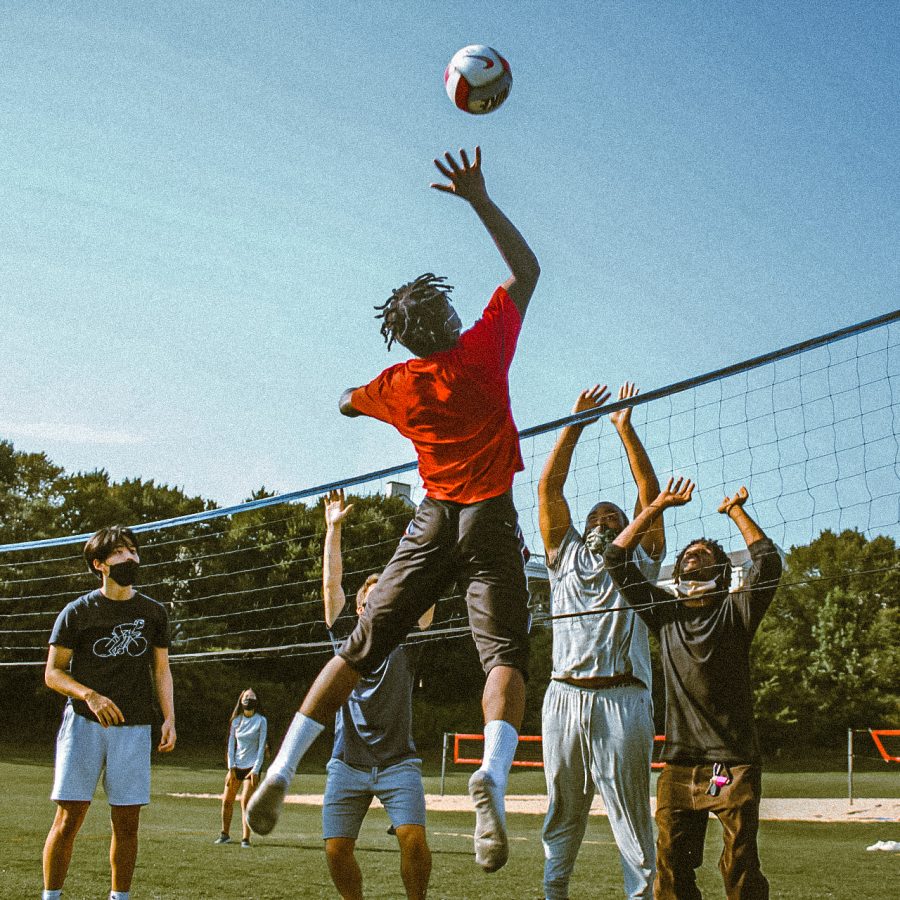 Senior Brandon Buxton elevates for spike on the opposing team at a volleyball club meeting held on the Active Oval in Piedmont Park.

The coed volleyball club team at Midtown has quickly grown in popularity since its start in the beginning of the school year.

Meeting every Monday in the marketing teacher and sponsor Laurel Street’s classroom, the club heads to Piedmont Park to set up and start bumping, volleying, and spiking. The team has held several meetings, all with a significant turnout thus far.

“Since the start we’ve had a huge turnout, so that’s the biggest thing that’s been really exciting to see,” Street said. “We get to go out and enjoy the weather, get outside, and I think it’s going to be really fun to do more scrimmages once everyone sort of gets up to speed. We have enough people to do some really fun scrimmages, maybe some tournaments. It’ll be a lot of fun.”

The club was restarted by senior Futa Kakinuma, who is also the club’s president.

“Originally in my freshman year, there was a junior or senior who was starting [volleyball club], but he kinda bailed on it,” Kakinuma said. “He had gotten me to help get people to come to it, and I felt bad because I had invited a bunch of people. When he bailed on it, I didn’t know what to tell them. So, I promised everyone that there would be a club happening eventually.”

Kakinuma said he has been very happy with the turnout and is excited for the benefits that a good attendance provides for the club.

“For a long time, I only played with like three people, which sucks because it’s supposed to be a 6-on-6 game,” Kakinuma said. “So now, it’s really nice to have a big group of people, but not like gym class where it’s like 80 versus 80 and not that fun. We have the right size and people who actually understand the rules, actually want to have fun, and understand teamwork and aren’t ball hogs.”

Senior member and club photographer Sudev Dongol said the club provides a chance to continue learning the sport for members and grow the sport to new people.

“We’re getting more members every day, every meeting,” Dongol said. “We have fun, and Futa’s teaching us. He’s been our teacher, and we’re getting better every day from it.”

Other members have also enjoyed the fun atmosphere and the opportunity to learn and grow.

“Last meeting we got to know each other, then walked over to Piedmont Park and played a couple games,”  junior member Fernanda Morales said. “For now, I want to be an active member going forward, and keep getting better.”

Despite the fun atmosphere and playful mood, the club has serious hopes and goals for its future.

“We’d like to challenge the JV girls volleyball team, and see if we can beat them,” Kakinuma said. “Other than that, we don’t have any real big goals besides growth. I have some ideas about making groups in the club between people who want to play for fun and people who want to play seriously, because part of the club is for people who couldn’t make it to the actual team, so that they have a place to play seriously.

Brandon Buxton, a senior and one of the original club members, said he agreed with Kakinuma’s idea of having serious goals for the club while maintaining a fun environment.

“It just started a few weeks ago, but it’s already gotten more serious,” Buxton said. “I see us going against the JV [volleyball] team and beating them, and maybe even rivaling the varsity team. We’ll see. For now, it’s just good fun.”