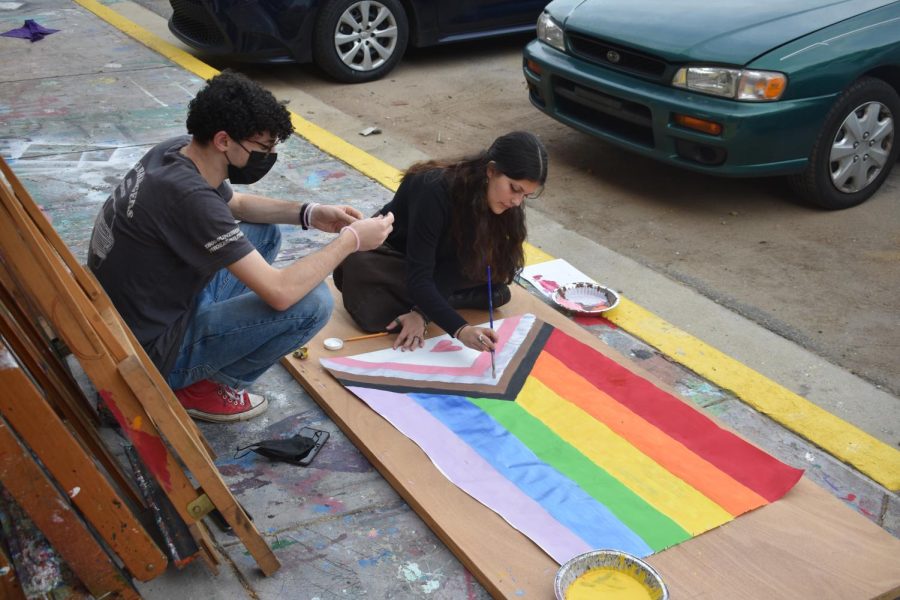 Seniors Brody Weiss (left) and Georgia Rice paint a Pride flag for the Gender-Sexuality Alliance Pride event. The event will take place on Oct. 29, from 5:30-8 p.m.

As COVID-19 cases rise, Midtown’s Gender-Sexuality Alliance (GSA) has found ways to create a community in the midst of a pandemic.

GSA’s mission is to create a tight-knit community for LGBTQIA+ identifying students. Acting President and Executive Board member, senior Sophia Maxim led efforts to revitalize, and rebrand the club for the new school year. She noticed the disconnect in the program last year due to online school. The in-person element of the club was critical to creating a welcoming environment, Maxim said.

“We’re all about discussion and meeting every week in-person was an important part of our club,” Maxim said. “There was not a lot of connection last year, but now we’re having regular, active meetings, and I think a lot of students really missed the environment that it provided. I really want to bring [GSA] back full force because every year, we just keep growing, improving and expanding.”

The revitalization of the club was also marked by its rebranding, moving from “Gay-Straight Alliance” to the “Gender-Sexuality Alliance.” Maxim said the new name supports the inclusive nature of the club.

“Changing the name is a positive change because it encompasses what we as a club are about, along with our message and our intentions,” Maxim said. “‘Gay-Straight Alliance’ is kind of narrow, and it’s not about gay versus straight people — it’s about learning and inclusivity.”

Senior Hayden Conrad is vice president and an executive board member of GSA. The board is composed of around 10 students who help coordinate and plan GSA meetings. Conrad believes the culmination of different perspectives contributes to the club’s success and inclusivity.

“There is a ton of intersectionality in the LGBTQIA+ community, and I think that that’s a big discussion that we need to continue having,” Conrad said. “We have different members because everyone has a different perspective. We need to have voices to talk about things like the susceptibility of Black, transgender women to violence and how sexuality is a spectrum.”

As an executive board member, senior Gigi Fisher focuses on creative direction. Fisher believes that senior leadership is a key element of GSA’s success in assisting younger members in becoming more involved in the program.

“I think it’s important for many seniors to be in GSA this year,” Fisher said. “There are so many underclassmen, LGBTQ+ youth, that are at Midtown this year who may not necessarily know who they can and can’t trust quite yet.”

Along with Fisher, Conrad believes GSA presents itself as a “safe-space” for students.

“What creates a safe space is active listening and confidentiality,” Conrad said. “As a member of the Queer community, I completely understand that, and I want to be there for as many freshmen, sophomores and anyone who just need someone to confide in and to feel validated. It’s really easy for us to just give our opinion, but what’s really valuable is listening.”

Sophomore Gryffin Thomas joined GSA with hopes of finding a community of students with shared experiences.

“Sometimes, I get overwhelmed with the homophobia going on,” Thomas said. “It’s nice knowing I have solidarity, and the community here is ready to accept anyone with open arms.”

The feeling of solidarity is similarly shared by sophomore Riley Edwards.

“The supportive environment is unmatched,” Edwards said. “I have personally experienced homophobia at Midtown, and it feels really good to know that there’s a safe space for me.”

Along with a sphere of considerate students, teacher sponsors Krissi Davis and Christopher Wharton are eager to add to the support.

“There was nothing like [GSA] for me when I grew up — there was no community to be a part of,” Wharton said. “I think it’s very important to have a place where LGBTQ+ youth and their allies can come support each other, share with each other and learn from each other.”

As an influx of new leadership, members and ideas pour into the club this school year, the influence of upperclassmen during Maxim’s four years of GSA has influenced her leadership goals.

“Having older kids to look up to has been super important throughout my high school experience,” Maxim said. “I have to acknowledge the impact former leaders and older Queer students have had on my sense of identity and feelings of acceptance. If I can have that impact on any other student, then my effort is entirely worth it.”

GSA has events scheduled to benefit Midtown and Atlanta’s LGBTQIA+ community. GSA also plans to work with LGBT organizations such as “Out of the Closet,” a non-profit thrift-store whose revenue goes to providing medical care for HIV/AIDS patients and Atlanta Pride.

“Since Pride is cancelled this year because of rising Covid cases, we really want to have our own mini pride that is Covid-safe,” Fisher said. “We also want to start volunteering at organizations like ‘Out of the Closet’ where funding goes to LGBT youth. We want to have meetings where we can talk and check in with each other.”

GSA typically meets every other Thursday in the orchestra room. GSA, catalyzed by communication and compassion, has provided a unique experience for some Midtown students.

“GSA is a really important club to have in place in order to spread awareness but also to create a community,” Conrad said. “Inside of Midtown, I think that GSA is about more than just a title to an organization. We need to stick up for each other, and GSA is going to be an organization that sticks up for everyone. It doesn’t matter if you’re straight, gay, bisexual or transgender. GSA is here to help — whoever you are.”