Exploring the enigmatic art of Banksy 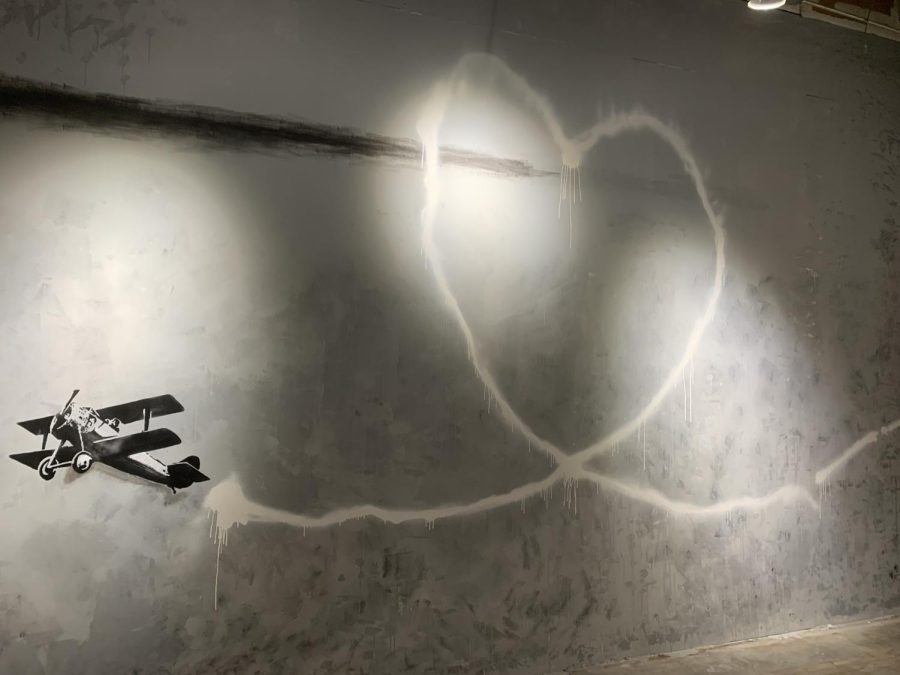 Throughout the exhibition, entire walls display art to make visitors feel they are looking at the real murals.

The worldwide sensation has traveled to cities throughout Europe, Australia and Asia and is now open in Atlanta.

“Atlanta was a great choice to bring the exhibition to, because it helps bring that culture of fine art times street art to the surface,” curator, painter and designer SPRAYKID, who helped develop the exhibition, said. “Atlanta is big in music and film but doesn’t express the fine arts in the same light.”

Unlike other art exhibition locations, the Art of Banksy: Without Limits exhibition chose the Underground Atlanta, situated in the Five Points area of Downtown Atlanta. This location, which was built during the post Civil War Reconstruction Era, emerged as an entertainment hotspot in the late 1960s and again in the 90s before being abandoned in the 80s and early 2000s.

“The Underground works well for the exhibit because it gives the mysterious gritty vibe that rings true to the nature of his work, it was the perfect atmosphere,” SPRAYKID said.

To create the exhibition, which is not authorized by Banksy but has not been halted, local artists were selected to reproduce Banksy’s works, onto the walls of the underground space.

“I was picked to join the curation team,” SPRAYKID said. “My role in the exhibition was assistant curator, in charge of reproduction of designs that included spraypaint and street style. I physically had a hand in every piece.”

Banksy was named one of Time’s 100 Most Influential People in the World in 2010 and is still relevant today. He is well known for his political pieces, which cover the exterior of many buildings throughout Europe and other countries, as well as his comedic take on serious issues and normal life.

Some students, including sophomore Ryan Carter, are inspired by and admire Banksy’s work.

“I’ve never incorporated his art style into mine, but now that I know [of] him and have seen more of his pieces, I think I will start making funny art pieces,” Carter said. “He likes to use graffiti and rats in a funny way, and I think having comedy in art is cool.”

SPRAYKID agrees, and thinks that Banksy’s ability to address heavier topics through his art is inspiring.

“As an artist, I do admire him,” SPRAYKID said. “His simplicity and traditional style while still sending a message is iconic.”

One of the draws to Banksy’s art is the lack of rules. Kottavei Williams, Theatre Tech, Fashion Design and Art teacher, thinks that his disregard for artistic guidelines sets him apart from others.

“I love that he is giving the art world the middle finger,” Williams said. “He is making art on his terms, and he is missing out on money that he could potentially make because he won’t reveal who he is. I love the mystery behind him — the fact that he continues to hold true to that.”

What started in the 1990s as a hobby of Banksy’s has gained popularity with some of his pieces selling for more than $1 million . This includes his most famous piece, “Girl With Balloon,” which sold for $1.37 million in 2018.

The Atlanta exhibition has more than 158 pieces of work, ranging from original prints, spray painted murals that have been reproduced by local artists, sculptures and multimedia presentations.

“My favorite piece [from the exhibition] was the image of the young girl watching the red balloon float away,” Carter said. “I feel like that piece had a very deep meaning and could be interpreted in different ways.”

Perhaps the most unique part of Banksy’s art is his anonymity, which has brought about sleuthing from dedicated followers.

“He’s anonymous and even people who are close to him and do know who he is refuse to tell,” Williams said. “The beauty of him being able and free to move around and say what he wants to say visually, without it being contained or contaminated by the art world is genius.”

Banksy continues to create art today, with his most recent piece having been posted to his Instagram on Aug. 13, featuring a rat relaxing in a beach chair. He officially posts all of his work to his Instagram, of over 11 million followers.

“I think Banksy has made a huge impact on the world,” SPRAYKID said. “His political rebellion and heroic stance with his art is dope and I think makes a lot of much needed noise in the world.”