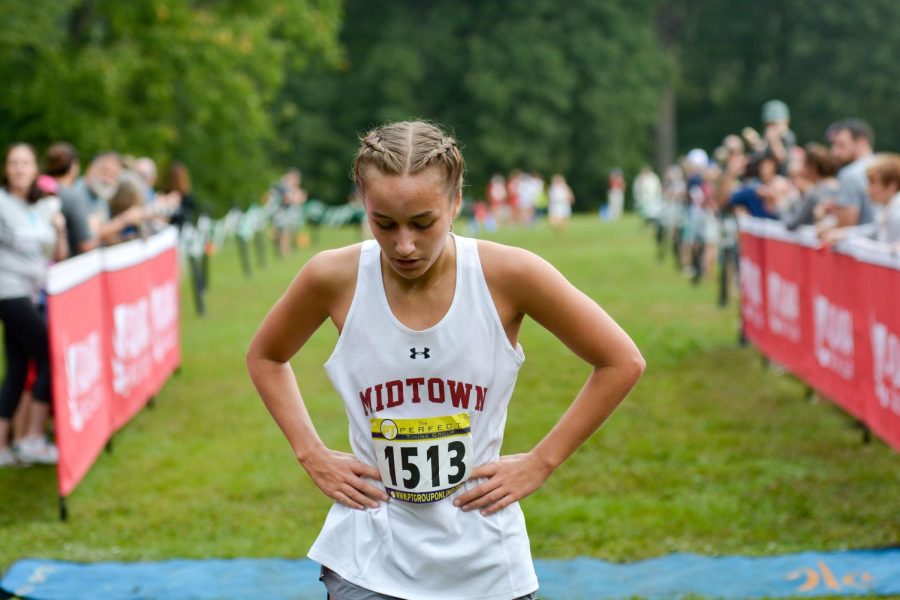 Sophomore and individual champion Cary Schroeder catches her breath after finishing the race.

Since the 2015 season, the Knights have dominated in girl’s cross country at Grant Park at the APS City Championships. The team continued its streak of winning the 2021 championship hosted by the Atlanta Track Club.

The team was without its usual top 2 runners, however, six runners finished in the top 10 and all seven varsity runners in the top 12 which allowed them to finish in first in the team scores with only 19 points.

Sophomore and individual champion Cary Schroeder was pleased with the result.

“I felt pretty good about [the race],” Schroeder said. “It was the Grant Park course; so, I knew it would be hard, though. “It was a lot better than Wednesday (weekly city) races with better weather, conditions, but [the course] still sucks though.”

Schroeder’s teammates expressed a similar sentiment about the course and the meet.

“The course was really hilly.” senior runner and seventh-place finisher Keira Ely said. “But, as long as we pushed ourselves up the hills, it wasn’t too bad.”

Head coach Jeff Cramer was pleased with the overall result, but was not too invested in the team results as a consequence of the course and competition level.

“I’ve been disappointed in the APS competitions in the past few years because we haven’t had as much participation so the competition’s just not as good as it should be,” Cramer said. “Even still, I’m always pleased when the team runs well. I thought the times were good this year, especially compared to the times we’ve run in past years. Overall, I’m pleased with the individual performances, but I don’t put much stock into the overall team standings.”

“We were missing a bunch of our top runners,” senior Ellie Spears, the fifth-place finisher, said. “But, the other runners stepped up and got the job done.”

Cramer said he was pleased with the team’s display of depth.

“It’s always fun to let the other people come in and win some awards that otherwise would have probably been won by some faster girls on the team,” Cramer said. “It’s good to know that we have enough depth to pull that off.”

The city meet serves as a springboard to the more important meets later in the season.

“The APS championship has always been a nice middle-of-the-season meet to give the team a chance to win some trophies, to get some recognition, to get some things they can bring back, but then carries us over to what is really our championship season, which is region and state,” Cramer said.