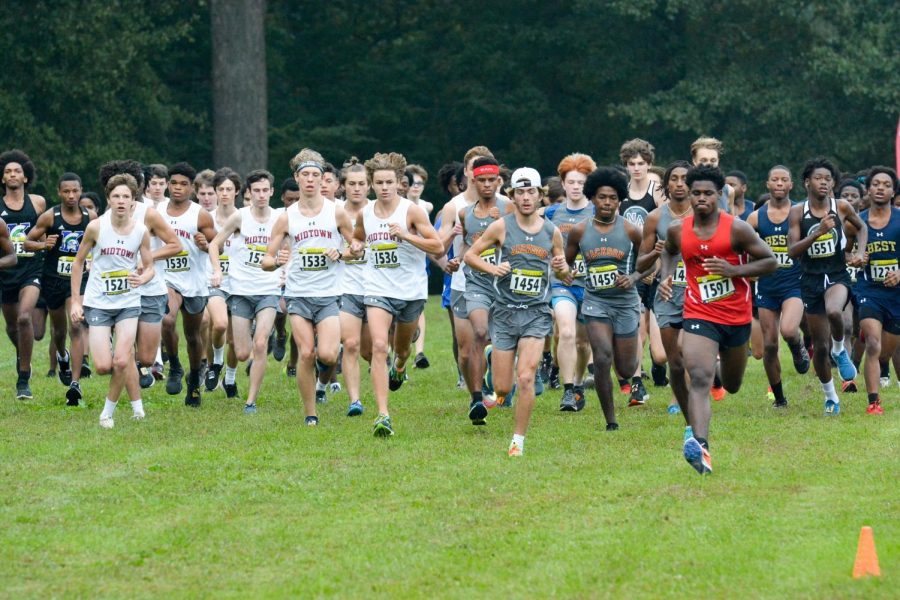 Despite three runners finishing in the top five, the Knights fell one point short to Maynard Jackson, 28-29.

“It didn’t go to plan, “ senior Everett Schroeder said. “We were hoping to go in and be able to get the win. We came just a little bit short of that, falling one point short, which is unfortunate. We have another chance to come back and race against Maynard again at region, and hopefully, win there.”

Schroeder was competing in his first meet after recovering from a stress fracture in his foot and a heel injury. He said he did not feel his best.

“Individually, it was not what I hoped,” Schroeder said. “I started feeling some stuff that I didn’t want to feel in my foot that caused me to slow down, but for the first race back, it was not terrible.”

“I was a little disappointed; obviously, we wanted to get first, but I think we all did our best,” Johnson said. “At the end of the day, we ran a good race as a team.”

“It went pretty well; I was happy with the results,” Mohney said. “We were one point away from placing first in the APS Championship; so, I was happy with how the boys did overall, especially considering most of the team consists of underclassmen.”

The team has five freshmen and three sophomores, with 12 first-time cross country runners. Junior Jordan Taylor is competing for the first time in cross country. He placed seventh for the Knights, and was pleased with his first meet.

“I think it went pretty well,” Taylor said. “It was my first meet, and I was pretty excited at the start. I feel like I was prepared coming from practice this week. My teammates on the sideline were cheering me on, and that helped a lot. It helped me push through the course.”

Mohney said he was pleased with the team’s perseverance near the end of the race.

“The team —a lot of them were either tired or hurting —especially two miles in,” Mohney said. “Just having that energy left to try and do well in the last mile, I was pretty happy with how the team did with that.”

Midtown fans added to the lively and supportive atmosphere of the race, which Mohney said motivated the runners.

“[The environment was] absolutely amazing,” Mohney said. “We had teachers, faculty and staff that actually came; so, it was nice to have some support there. It was nice to be able to rely on them outside of the coaches and other athletes.”

The meet was the last race at Grant Park for the seniors. Johnson said the course is challenging, but he will miss running it.

“I like to complain about that course a lot, how hilly it is and how uneven it is, but since we have run it so many times, it has some kind of sentimental value,” Johnson said.  “Just having all those people out there, there was a little bit more of a buzz today for the city championship event.”

As a whole, Mohney believes the team can succeed this season.

“I think we have a shot at doing well at state, as to how well, I am not quite sure, ” Mohney said.  “I think we can definitely make some noise and possibly compete for a good place or position.”