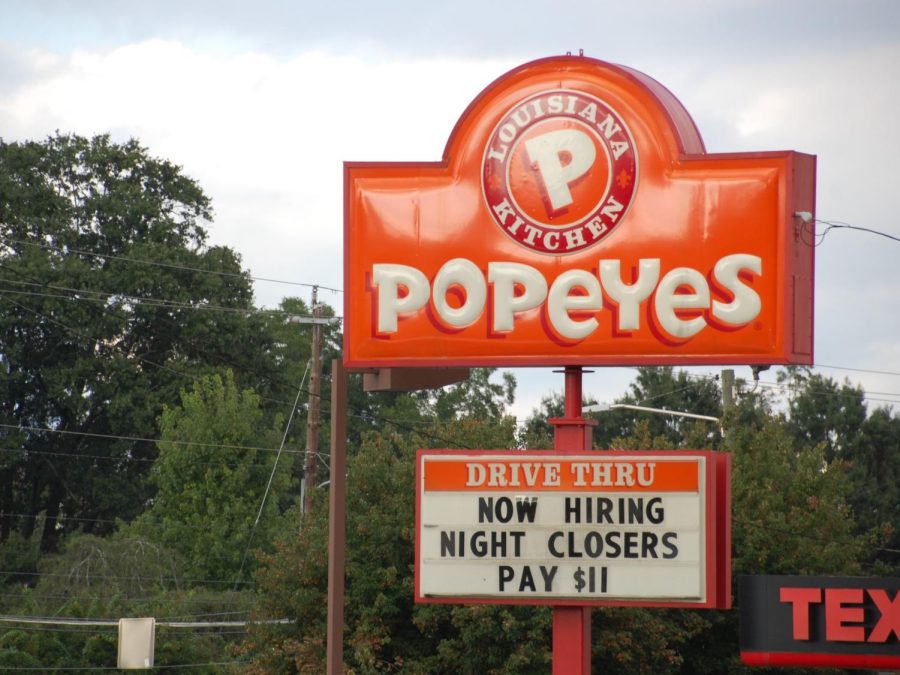 Fast food restaurants such as Popeyes have been searching for workers. The fast food industry is one of the most affected industries of the labor shortage.

The labor shortage in the U.S. skyrocketed during the pandemic, and its effects continue to harm industries needing workers. However, one group benefits from the shortage: high schoolers looking for jobs.

For teens seeking better pay, now is an ideal time to get a job. Quit rates in many industries increased over the pandemic, with the food service and accommodations industry, leisure and hospitality industry and retail trade industry having experienced the highest rates. According to the Bureau of Labor Statistics, in July, their rates were 5.4 percent, 5.1 percent and 4.4 percent, respectively. High quit rates increased demand for employees which has led to higher wages in those jobs.

Sophomore Grace Franetovich started working at Italian market Tuscany At Your Table in August to have a more reliable income.

“I decided to get a job because I wanted to have a form of income that was more structured,” Franetovich said. “I was babysitting before, but you don’t know when people are going to ask you to babysit; so, now I have a set income.”

As of the last business day in July, 10.9 million job openings were available; however 8.4 million people were still unemployed, the Bureau of Labor Statistics reported. One reason for the labor shortage in low-paying jobs is the risk of Covid-19 in work settings. Because of the pandemic, many Americans stopped working because of health concerns, but also because of lay-offs and job reconsiderations. As a result, more people retired.

“It could make it easier if a lot of businesses have had employees quitting that are like older employees,” Franetovich said.

“I just felt like I’m getting older,” Brown said. “I was in 11th grade, and I was like ‘next year, I’m going to have to pay for college and stuff,’ so I just wanted to see how it is working with other people.”

Brown works at Zoo Atlanta, which in order to successfully run, requires a lot of workers, including custodians, people who work with animals, food industry workers and more. To find workers, Zoo Atlanta reached out to Midtown.

“Kroger [and] Chick-fil-a  — a lot of people come to school,” Brown said. “That’s how I found out [Zoo Atlanta was hiring].”

Over the summer, sophomore D’mitry Wdowin worked at clothing retailer L.L. Bean. Wdowin got a job because he wanted experience, but also because he knew the store was understaffed.

“There have been a lot of people who used to work jobs, but now no longer work,” Wdowin said. “Those jobs let them go because of financial reasons.”

From the food industry workers to retail employees, the labor shortage has affected employed and unemployed Americans. High school job seekers have benefitted.

“Anybody could get hired,” Brown said. “Everybody is looking for workers.”