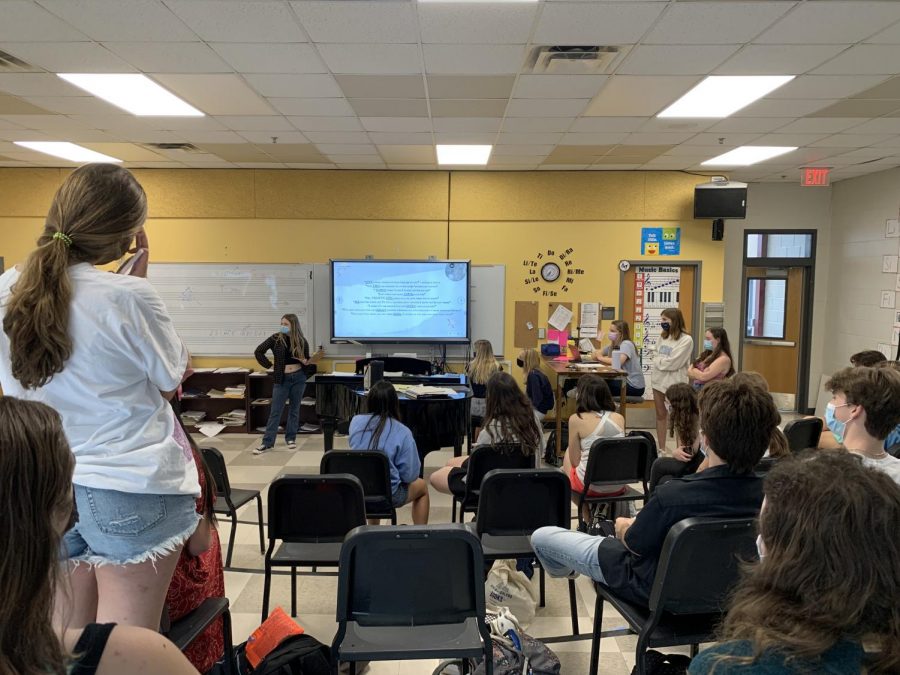 At the clubs first meeting, members participated in a number of games related to Taylor Swift's nine albums. The next meeting will be in late October.

As you walk into Midtown’s chorus room, you’re met with the melodic voice of Taylor Swift.

The Midtown Women in Music Club welcomes all students to celebrate female artists and their impact on the music industry. The club held its first meeting on Sept. 14. During the meeting, students discussed and participated in activities relating to women in the music industry, primarily Taylor Swift.

The idea to start the club came from seniors Frankie Soto and Lindsay Ruhl, who thought it would be an exciting opportunity for Midtown students.

“I went to an Atlanta United game with a group of friends, we were chatting about Taylor Swift because she performed at Mercedes-Benz Stadium during her Reputation tour,” Soto said. “Lindsay was saying she wanted to start a Taylor Swift fan club in college, and I thought it was a really good idea. I was on my way home and my sister asked why we didn’t start one at Midtown. I texted the group chat that night and asked them if they wanted to do it.”

Resolving to start the club, the founders held a Zoom call to refine the details.

“We made all the plans and came up with all the activities and competitions we were going to do throughout the year,” Ruhl said. “It was really fun to get the foundation set. We could finally start to see it come together.”

“A lot more people have shown interest than I expected,” Ruhl said. “We had a really good turnout to the first meeting, which was super exciting.”

Senior Lauren Scaffidi acted as co-founder as well. She helped design a logo and promotional posters for the club.

“We thought about interesting activities we could do and tried to find creative new ways to make a club that served everyone involved,” Scaffidi said.

“I agreed to sponsor the group because I loved the creative approach to the club,” Hill said. “Like many fields, women have not always received equal treatment in the broad music industry. It’s an important topic, and one that deserves to be discussed and explored. It’s important to celebrate female voices in music.”

While the club will focus primarily on Taylor Swift and her music career, it will also shed light on other female artists and their roles in the music industry.

“We’re going to talk about the influence of women in the music industry,” Soto said. “I feel like there aren’t enough clubs that celebrate women in different sectors of the workforce. There’s a club for women in finance and women in science, but there wasn’t really anything about women in the entertainment industry or the arts. I feel like this is just a good way for us to talk and expand our knowledge of women in music.”

Meetings will be held once a month, with each session representing a different Taylor Swift album.

“This month will be her self-titled, Debut album,” Soto said. “October will be Fearless, November will be Red, December will be Speak Now… We tried to make it so they suited the month they were in. For example, Back to December is on Speak Now so that will be the theme for the meeting in December.”

Many students are excited for the chance to discuss and celebrate female artists.

“I’m really interested in joining new clubs and meeting new people,” sophomore Holly Nhan said. “They’re a great way to not only have fun but also broaden your experience and friend group. I love music and I love joining clubs, so it’s perfect. I get to meet a really diverse group of people and hear their thoughts on female artists.”