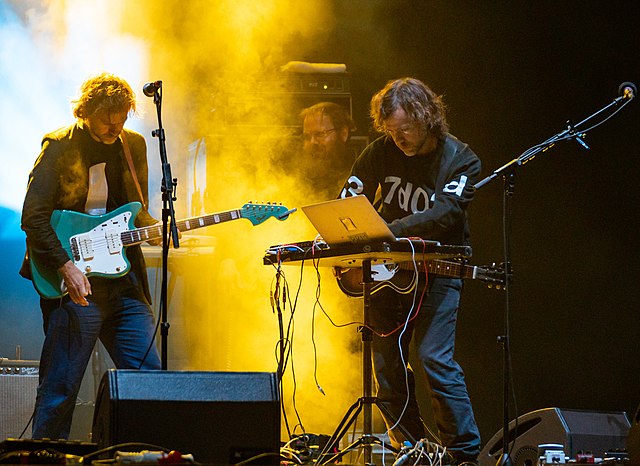 Big Red Machine's second album, How Long Do You Think It's Gonna Last?, was released August 27, 2021.

“How Long Do You Think It’s Gonna Last?” is a simple question we have been asking ourselves and those around us about the state of the world, in the midst of the Covid-19 pandemic. It’s also the title of a well-written and well-performed collection of music.

Created by the band Big Red Machine, “How Long Do You Think It’s Gonna Last?” is a 15 song record packed with nostalgia that was released on Aug. 26. Aaron Dessner, the frontman of “The National,” and Justin Vernon, the frontman of “Bon Iver,” collaborated to form the band.

Another notable feature is Taylor Swift, who assisted in the writing of and sings lead vocals on “Renegade”, and background sings on “Birch,” the album’s fourth track. This is not the first time Swift has worked with Dessner, who co-produced and co-wrote her albums “Folklore” and “Evermore.”  Vernon has duetted with Swift previously, on songs such as “Exile”.

Features aren’t the only stand-outs about this album. The opening track, “Latter Days,” featuring Anaïs Mitchell, is perhaps one of the most well-done songs, tugging at the emotions of listeners with heartfelt lyrics including “Stacked yourself against the odds, Talkin’ back to an act of God”.

A feeling of hollowness is created by “The Ghost of Cincinnati,” which serves as an ode to those who feel forgotten. The line “I’m overspent, overworked, overlooked…,” along with the repetition used throughout the song provides for a truly heartfelt track.

The previously mentioned “Hutch” will tug at the heartstrings of anyone who has lost a loved one. The track is named after Scott Hutchinson, a late friend of Dessner and frontman of the indie group “Frightened Rabbit” who took his own life. Grief can be hard to write about, but Dessner does it beautifully with the lines, “So how did you lose your way? And what can you tell me now? How are you these days?,” and “If I could, I would pick you back up to the top.”

Sometimes, emotional openness and looking back are seen as taboo. “How Long Do You Think It’s Gonna Last?” bares its soul from the first notes, with Vernon, Dessner and the many featured artists and writers, providing anyone listening with a sense of comfort and belonging.

Overall, the album is incredibly well-done. The tracks have a diverse range — some lamentful, some upbeat and some questioning, but they flow well together. Anyone who enjoys indie music, is struggling with feelings of isolation or anxiety or simply wants to understand their emotions better should give “How Long Do You Think It’s Gonna Last?” a listen.