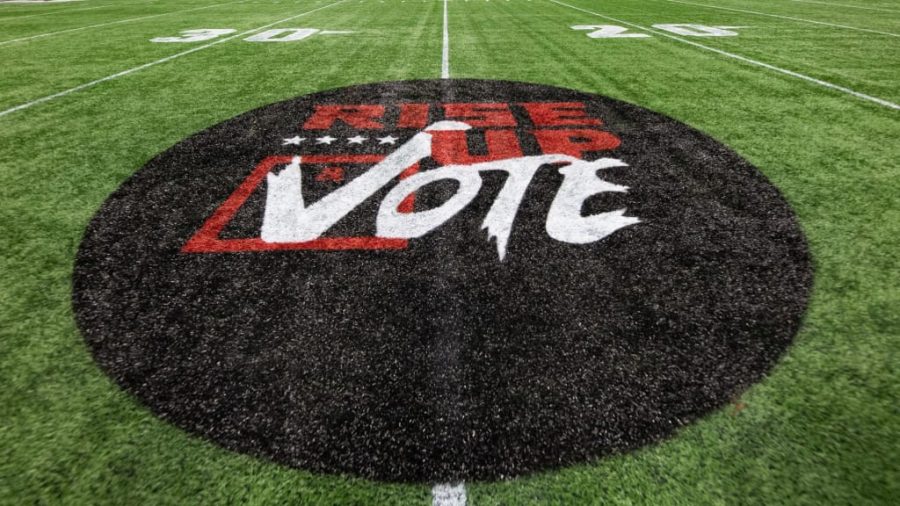 The district is hosting a pep rally event to encourage juniors and seniors from 12 different high schools to register to vote. This event has raised concerns regarding Covid implications.

Midtown students are participating in a district-wide field trip meant to energize 11th and 12th graders about voting and democracy. However, this event on tomorrow, Sept. 28, at Mercedes-Benz Stadium has created Covid safety and logistical concerns.

Democracy Class Atlanta is a program that is working with “Rock the Vote” and Mercedes-Benz Stadium, as well as other partners to make learning about democracy a part of the curriculum in social studies classes. Ten students from Atlanta Public Schools were selected as part of a youth council that gave input on the curriculum, and some APS teachers have participated in the pilot program by using this curriculum in their classes.

“We have been working with ‘Rock the Vote ‘and working with Democracy Class Atlanta and putting lesson plans into place in class and there is a culminating event to the project that has kind of taken on a life of its own,” teacher Morgan Jones* said. “We didn’t realize what it was going to be until now.”

A pep rally is being hosted in the Home Depot Backyard at Mercedes-Benz Stadium as a culminating event. According to pre-registration numbers, several hundred juniors and seniors from 12 Atlanta Public Schools high schools are expected to attend the event. Activities will include Ferris wheels, euro bungee, rock climbing, live entertainment, food trucks and ziplines.

“The Pep Rally is designed as a fun and engaging experience to reinforce the lessons being taught in Democracy Class,” APS said in a statement.

Midtown teachers are concerned with the safety of the event. According to the APS COVID-19 case report, there were 183 cases reported during the week of Sept. 20 across the district.

Jones does not support the event and is worried about the Covid implications.

“From the teaching perspective, my concern is that this is an event that is going to put our children in harm’s way, and I cannot support something that is going to hurt a single child in a situation where we have been shut down for a year and a half,” Jones said. “Putting a situation out there that could possibly shut down the school district scares me to death. And I get it; we need to go back into some sense of normalcy, but this ain’t it. If you want to do something, do it at the individual schools. I do not see this event to be of educational value.”

Many teachers, administrators and students said the logistics and expectations around the event have been poorly communicated between the organizations, the district and the schools. Government and history teacher Jay Sullivan said he wasn’t sure what was happening concerning the event until Sept. 20. There are additional concerns about whether participation in the event is consistent with APS’s original ban on field trips.

“A district communication that came out in the first week of August was that there was a moratorium on field trips, no field trips, for the entire fall semester,” Assistant Principal Carrie MacBrien said. “This is a district mandated field trip; so, I guess they are making an exception for their particular initiatives. So, it’s not a Midtown initiative; it’s something that’s coming from the district, and I guess they have decided to put that rule aside for this.”

In its statement, APS said it “carefully considered the size and scope of this event to make sure COVID-19 concerns were addressed with Rock the Vote event planners.” The statement also said that there will be many central office personnel to act as chaperones, as well as APS and Mercedes-Benz Stadium security personnel to monitor the event and ensure compliance with the mask mandate.

According to APS policy, the current nationwide substitute shortage has implications for the number of students Midtown can to send to the event. At Midtown on Sept. 27, 12 teachers were absent and only six substitutes were available to fill their positions.

“We were asked to send 400 students,” MacBrien said. “That’s an impossible number because 400 students would require 40 chaperones.”

Instead, two chaperones, MacBrien and graduation coach Kristin Robinson, will accompany more than 20 Midtown students on the field trip. Midtown is only sending one bus, and who will attend the event was decided on a first-come, first-served basis.

To attend the event, students’ parents were required to sign a “Release and Waiver of Publicity and Liability.” Sullivan, who was formerly an attorney, said he was surprised at some of the contents of the waiver, specifically the part that releases Mercedes-Benz Stadium and its affiliated companies and partners from liability from any harm that one may experience (including being infected with Covid-19) “regardless of whether it results from the negligence of the MBS Parties, or others.”

“I don’t recall seeing something that specific, covering ‘labor and release’ for school children,” Sullivan said. “Regardless of whether [APS is] being negligent about this, [APS is] trying to tell you that you can’t hold [the district] liable about this. For me, that’s kind of like you’re foreseeing something happening.”

Social Studies teachers were required to give all their students the option to go to the event, despite the concerns, according to MacBrien.

“We were told we had to give students the opportunity to participate,” MacBrien said. “We had a short timeline to get the permission slips out. I wish I had them in advance so we could have gotten them out a month ago, but they just weren’t available to us then.”

Many students received permission slips on Friday and were expected to turn them in on the same day. This led to some students forging parents’ signatures.

“The permission slip itself is also pretty upsetting because it absolves all of the parties involved from any legal litigation that could arise from any illness or injury that incurs from going to this event,” Jones said. “That kind of blows my mind. What worries me there … is that you are taking a situation where you are putting kids in a dangerous situation and then saying ‘but we don’t take any responsibility if something happens.’ I don’t understand that, and I don’t know what parent would sign off on something like that. I, as a parent, would not sign off on something like that.”

Junior Amanda* heard about the trip from a friend. Although Amanda is 16 and is not old enough to register to vote, she still looks forward to the event, but has some worries about Covid. Amanda, along with many other students, said she forged her parents’ signatures so she could go on the trip.

“They gave us the permission slip at the very last minute,” Amanda said. “No teachers told me about it. And one of my other friends said he wouldn’t go anymore because it’s going to be crazy with Covid. The moms are making the kids back out. I called my dad to let him know that I signed this paper for him, and he was like, ‘OK.’”

Amanda said while she has some concerns about Covid-19, she chose to go on the trip because it sounded like a day of fun.

“I’m excited to go; I think it will be really fun,” Amanda said. “I’m excited for the food, but I didn’t know this was about voting. I am a little worried about Covid. I just know there are going to be a lot of people there. I will turn 17 in December, so I’m not going to be old enough to register to vote now, but I will register to vote when I can.”