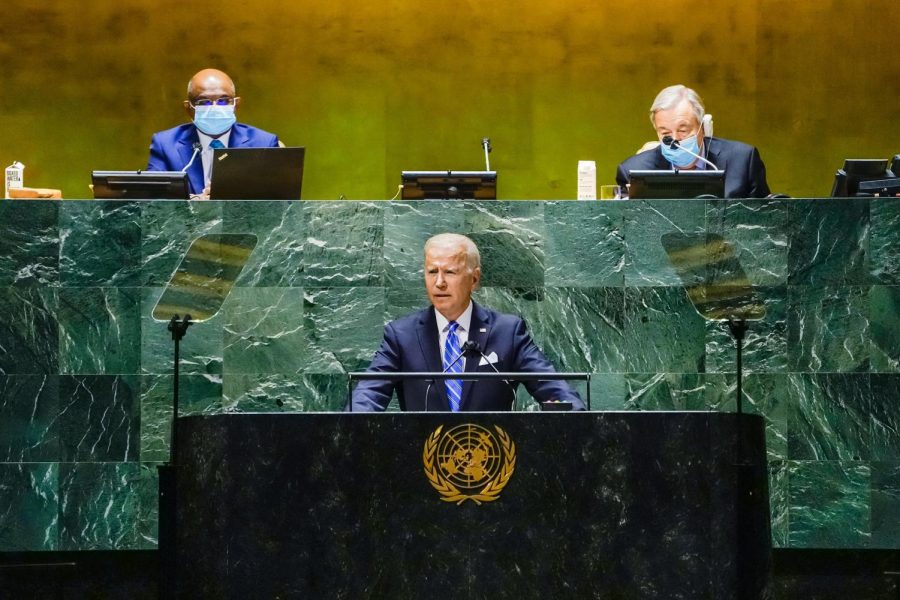 Pres. Biden delivers his debut speech to the UN General Assembly on Sept. 21. In his address, Biden stressed the importance of international cooperation to address issues such as the ongoing Covid-19 pandemic and reiterated commitments to restoring the U.S.'s position as a trusted ally on the world stage. However, these ideals serve as a marked contrast to his foreign policy in his first eight months as president.

After eight months in office and a series of negatively perceived foreign policy initiatives, the United Nations General Assembly served as an opportunity for Pres. Joe Biden to repair his reputation, and the country’s, as a trusted ally to the world.

During his campaign for the presidency, Biden advertised himself as a skilled diplomat who would restore the United States’ strained foreign relations under the Trump administration. However, while Biden reiterated his commitments to U.S. allies and emphasized the importance of security, prosperity and freedom around the world, his lofty ideals contrast with the reality of his current foreign policy actions.

Biden’s insistence on reimplementing a more diplomatic and cooperative foreign policy stance in the wake of Trump’s “America First” approach is made especially unconvincing by the U.S.’s mishandled withdrawal from Afghanistan. In his speech, Biden characterized the withdrawal as an effort to stop “fighting the wars of the past,” and to instead shift the focus of American foreign policy to addressing the concerns of the future. However, the U.S.’s attempts to wipe its hands of responsibility in Afghanistan serve as a self-interested initiative that only redirects the burden of the tumultuous situation onto NATO allies and the Afghan people.

While Biden claimed that the U.S.’s withdrawal opened new doors for “a new era of relentless diplomacy” and that he remained committed to supporting the people of Afghanistan, U.S. action in the country has left the Afghan people, particularly women, vulnerable to human rights violations. NATO allies have been blindsided by the strict, hasty evacuation, which left key U.S. allies scrambling to protect their own citizens, as well as the Afghan people abandoned by the U.S.’s sudden departure.

In his speech, Biden said “we’ve ended 20 years of conflict in Afghanistan,” but this is hardly the truth. Without U.S. protection, the Afghan people are now forced to fend for themselves in continued efforts against the Taliban to champion human rights. The U.S. may have ended its military involvement in the country, but the mess the U.S. bears responsibility for creating has simply been left for someone else to manage.

While his decisions in Afghanistan are reminiscent of Trump’s “America First” foreign policy, Biden has taken steps to reverse much of the previous president’s isolationist agenda by renewing cooperation with the World Health Organization and reentering the Paris Climate Agreement. While those are positive first steps to restoring relations with U.S. allies, Biden’s insistence that the U.S. is “back at the table” as a collaborative international power is difficult to believe when his actions say otherwise.

Most notably, French Pres. Emmanuel Macron was absent from the UN General Assembly and recalled the French ambassador to the U.S. after Australia canceled a $66 billion agreement to purchase submarines from France in favor of a security pact with the U.S. and the United Kingdom that provides Australia with nuclear-powered submarines. While Biden and Macron have since attempted to remedy the conflict, and the French ambassador has returned to the U.S., the situation serves as yet another example of Biden’s self-interested foreign policy damaging his international standing and fracturing U.S. relations with key allies.

Also among the primary focuses of Biden’s speech was the ongoing Covid-19 pandemic, and the importance of countries cooperating internationally in their efforts against the spread of the virus, a sentiment that flies in the face of countries that are struggling to vaccinate their population while Americans prepare to receive a third booster shot. Biden’s discussion of new technologies, and his emphasis that they be used for good, also comes across as tone-deaf amid a technological arms race between the U.S. and China.

Even in seizing the opportunity to reiterate the collective humanity required to tackle issues such as a worldwide pandemic and climate change, Biden’s words on the international stage are undermined by his actions, which continue to put American interests first to the detriment of other nations.

Biden still has a lot of work to do if he is going to repair U.S. relations with allies across the globe. While his speech to the UN General Assembly restated his commitments to doing so, his foreign policy endeavors thus far run contradictory to this goal, and leave foreign allies and the American people understandably unconvinced.