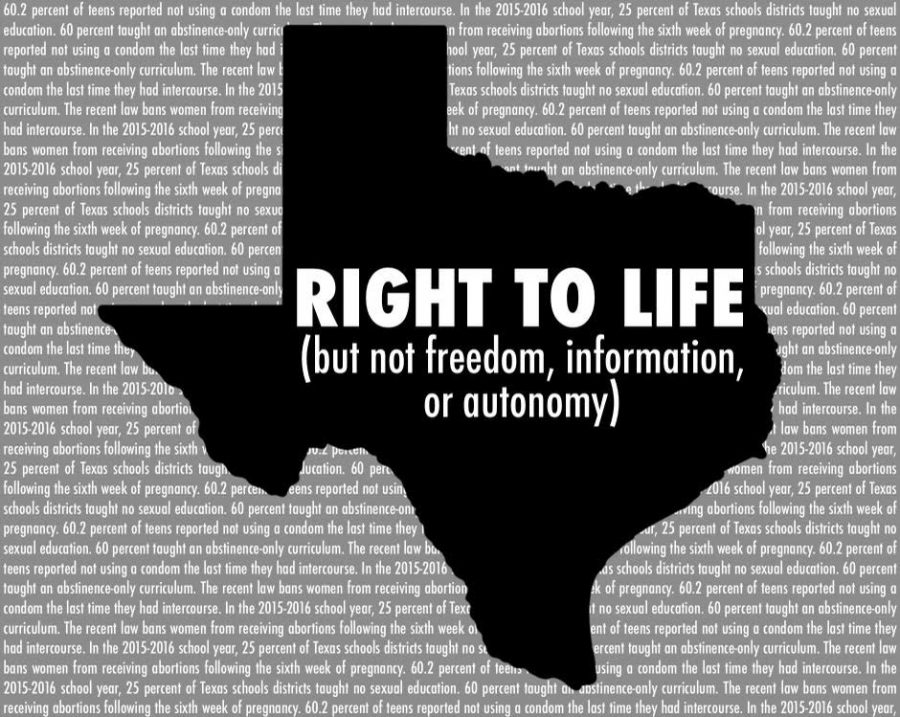 The Texas abortion ban and the right to life denies students and citizens of their rights to access of information, contraception and comprehensive sexual education.

In this turbulent time of American history, the Supreme Court’s refusal to block the recent Texas abortion law has reminded America of how far it has come, yet also how far it still has to go. The ban on abortion reveals the progress that has yet to be achieved for abortion rights, women’s rights and sexual education.

The Texas abortion law outlines some of the strictest rules for abortion in recent years. The ban prohibits women from receiving abortions following the sixth week of pregnancy (at a time where most women don’t even realize they’re pregnant), and makes no exceptions in cases of incest or rape.

Furthermore, the Texas abortion ban has sought to deputize citizens in the fight against access to abortion by allowing private citizens to to sue abortion providers and anyone giving assistance to women trying to obtain abortions. This includes simply providing financial assistance for an abortion or offering a woman a ride to an abortion clinic.

This new tactic incentivizes citizens to hunt down abortion seekers, abortion clinic staff, patients’ family members and others. Plaintiffs do not need to know the person they suspect of violating the law, and successful lawsuits are entitled to a reward of $10,000 alongside supplementing the additional cost of legal fees.

The Texas abortion law represents a nightmare scenario for abortion supporters and women nationwide. It reminds us how quickly our rights can be taken away and how quickly the state can decide it has control over our bodies, and can mobilize citizens to punish women for trying to claim their own autonomy.

Instead of improving sexual education, or preventing unwanted pregnancies from occurring, Texas has decided to put a bandage over a bullet hole.

According to the Texas Freedom Network, a nonpartisan organization focused on issues concerning religious freedom and sexual education, Texas ranked seventh nationwide in teen birth rates in 2017. The same report concludes that 60.2 percent of teens reported not using a condom the last time they had intercourse, ten points above the national average.

These statistics don’t come as a surprise, as Texas’ sexual education is overwhelmingly lacking. According to the New York Times, Texas state law does not require public schools to teach sexual education in health courses, although if schools do choose to, they are to stress an abstinence-first approach. The Texas Freedom Report also found that in the 2015-2016 school year, 25 percent of Texas school districts taught no sexual education, 17 percent taught abstinence in addition to information on contraception, and 60 percent taught an abstinence-only curriculum. While the report is dated, these are the most recent statistics available.

It is clear Texas’ abstinence-only approach isn’t working. According to the CDC Texas has a teen birth rate of 24, meaning that for every 1,000 girls aged 15-19, 24 will give birth, making Texas’ teen birth rate the eighth highest in the nation. Instead of stopping a problem at its root with comprehensive sexual education, Texas has decided to take the flashy, yet inadequate route by banning abortions.

Texas doesn’t want to solve its problem of unwanted pregnancy, because if it did, it would start with mandating sexual education and education on contraception. Instead, Texas is focusing on solidifying conservative support under grandiose ideas of “life.”

During this tumultuous time, it stands to consider not only what the Texas abortion law does, but also what it doesn’t do. The ban has fundamental problems, in that it doesn’t address teen pregnancy and sexual education. It’s time for Texas and other conservative states to start considering the quality of life of a child born unwanted.