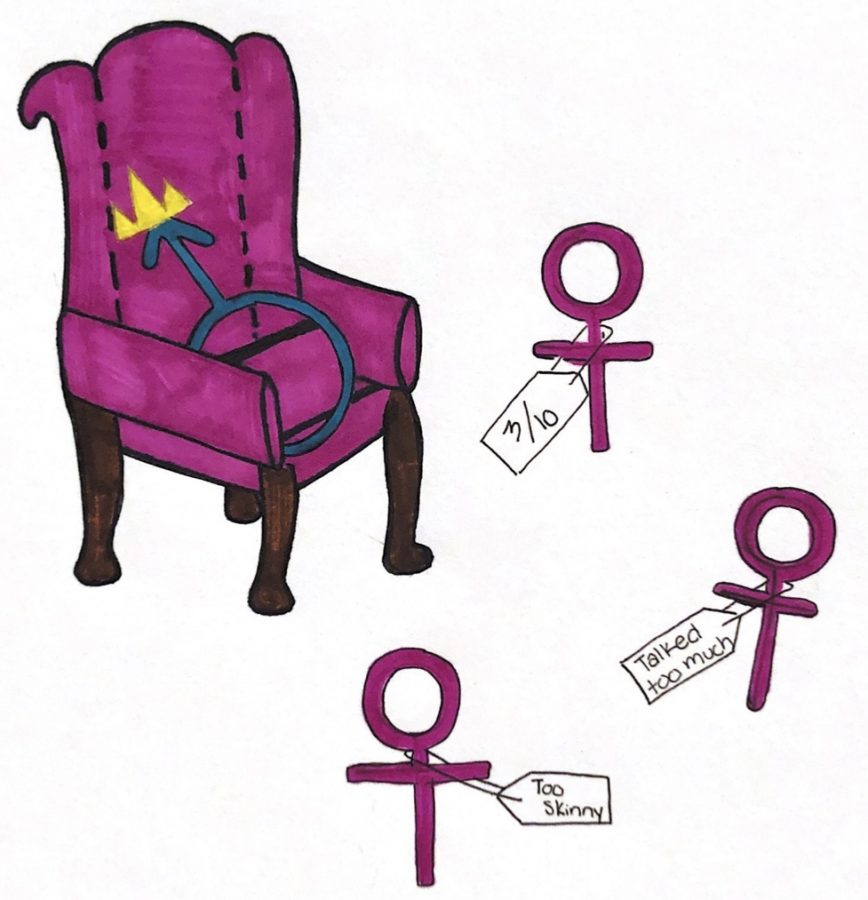 Women appear and act for men.

That is the concept of the male gaze, a term first coined by author John Berger in 1972, but popularized by feminist Laura Mulvey in her 1975 essay on cinematography titled “Visual Pleasure and Narrative Cinema.” This is an idea brought forth decades ago but still has strong relevance in modern-day social standards.

Imagine living life in a way that feels free and your own, simply to be told that your mannerisms are viewed as if you’re trying to please a specific group of others, namely masculine, heterosexual men.These men are empowered while the women they’re objectifying are sexualized and degraded.

According to the male gaze, women are to be looked at, admired and presented on a silver platter.

Being thought of as existing just for men is a disturbing concept. Many Midtown students had a run-in with the male gaze last year when a group of male students made a bracket ranking their female peers based on appearance. This incident only heightened many female students’ self-consciousness and made them more aware that they are being constantly sexualized by their male peers.

How to behave in class, how to present yourself to the world, and even how you act when minding your own business right outside of the school campus are affected by this concept.

Being scared to slouch, burp, or say something in an unpolished manner stems are prominent examples. The pressure to appear “ladylike” even as a kid, to seem well-bred and elegant, is powered by the wants of men.

There’s these expectations for any girl, even from strangers. When men stop young women on the street telling them to “smile” to “look nicer,” small comments like this can have a harsh message behind them — stop your daily activity to fake an emotion so that this stranger can be pleased.

While the male gaze may be an intangible concept, it has real psychological effects. Constantly being expected to perform for others has tangible effects on women. A 2011 study conducted by the American Psychological Association, said “mere anticipation of a male gaze increased self-objectification in young women and led to greater body shame and social physique anxiety when compared to participants who anticipated a female gaze or no gaze at all.”

The pressure to appear one way, the narrow-minded version of beauty, is one of the most toxic and damning things to someone’s mind.

Due to the prevalence of the male gaze, women have been implicitly trained to perform for it. Smile, dress pretty in case you see someone, never slouch or curse, and look how others want. Those are the expectations set for women, and if they somehow fall short they’re at fault.

Behaviors like that take a long time to unlearn. Once you’re trained to do something one way, it’s difficult to change your ways overnight when realizing you’ve been doing these habits for others, but to keep this harmful habit can be dangerous for young women.

Everything to do becomes more work, more pressure and more stress.

Women started to be able to vote in 1920, equality in the workplace supposedly began in 1963, but there is such an eminent difference in the treatment of men versus women in the world today. Women have already done a lot, but now we have to take another step forward in ridding society of these toxic norms.