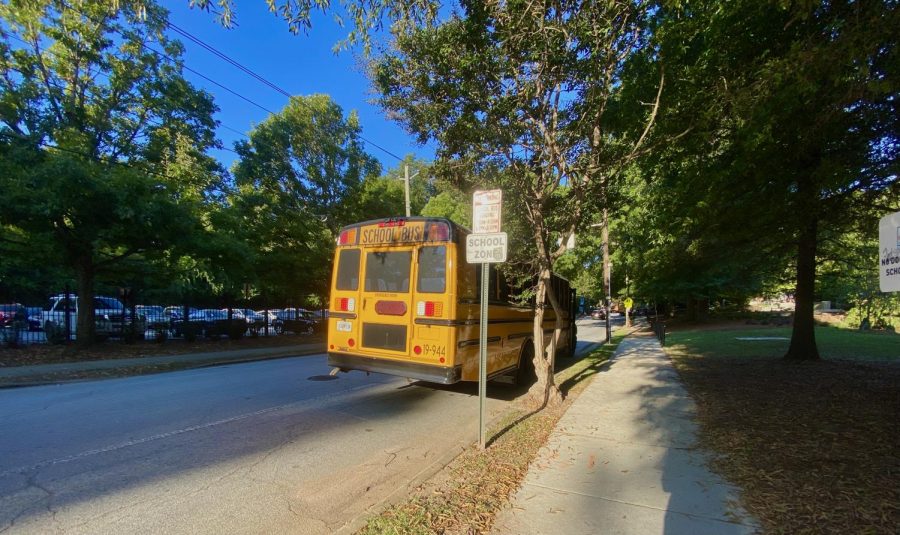 The district's bus driver shortage has raised concerns among parents and students while APS works to solve the issue.

“We started working with the transportation department and our budget office, and we were able to do a few things proactively,” APS Chief Human Resources Officer Skye Duckett said. “We only have about 30 vacancies. Just as quickly as we are hiring people, we also have people who are resigning for health reasons or personal reasons or to go to other jobs.”

More people are staying at home because of the pandemic and are becoming more reliant on delivery services. This has caused increased competition for commercial licensed drivers, and now the district has to compete with companies such as Amazon and DoorDash for drivers.

“We have increased competition from people we didn’t normally have competition with,” Duckett said. “This also allowed us to offer hiring incentives like sign-on bonuses, which school districts are not normally known to do, but we got some American Rescue Act funding from the federal government to help with things like this. Normally, we don’t have enough money to give hiring incentives or bonuses to anybody.”

As a result of the increased funding, APS increased drivers’ pay between $18 and $27 an hour and increased the number of hours worked per day from four to six hours.

“If you do the math for the entire year, that’s two more hours a day; so, it makes their annual salary a lot higher,” Duckett said. “A few years ago, we actually gave them paid benefits from the district like sick leave, health insurance, a medical spending account, things like that. Those things are basic and foundational. You want them to bring home a good wage, and you want to be competitive in the market, and you want to make sure they have access to the same benefits as the full-time employees.”

Howard sixth-grader Austin Godwin was never late to school until his bus driver left after the second week of school. Now, Godwin is often up to 45 minutes late to school.

“Riding the bus has been great until our old bus driver quit to get a better job,” Godwin said. “I liked my old bus driver because she was never late; that was definitely the best part. Now our bus drivers are constantly switching. Sometimes, my teachers give me tardies because I’m late to homeroom, which is annoying because it isn’t my fault.”

“The morning buses for the most part seem to be fine,” Roberts said. “The harder part is the late afternoons for the middle school. What I think is happening is the snowball effect. One bus route is late from the elementary school, then the middle school is the one that really feels the brunt of it. I think a lot of people’s frustration is the middle school buses; a lot of kids aren’t getting home until close to six o’clock.”

Because the bus routes are constantly changing and combining with other routes, drivers are often confused and sometimes have to rely on students for directions.

“If the driver doesn’t know the route, the kids are directing him,” Midtown Cluster parent Jenny Richman said. “The bus driver shortage, as a whole, I think, is what is causing the main issues with the bus because after the first week of school, things started to get on track in terms of timing. I think now the issue is that they just don’t have enough drivers; so, they’re trying to combine routes, which is taking longer.”

In order to be a school bus driver, a Commercial Drivers License (CDL) is required. However, due to the labor shortage, the district considered hiring people without a CDL and paying for their training, Duckett said.

“In a normal time, job vacancies are hard to fill in transportation, but add a pandemic and add labor shortages, it just makes it even harder,” Roberts said. “It’s a really hard job, and it’s a hard job to fill. I think the frustrations are that parents get really anxious because you don’t know where your kid is.”

To combat these problems, the APS Transportation Department implemented an app called “Here Comes the Bus” that informs parents when the bus is near the assigned stop.

“The ‘Here Comes The Bus’ app is great if you can get it to work,” Richman said. “The app is fantastic because you can set it to show you how close the bus is to picking up your kid to your stop. You can get an alert that says the bus is within a mile of your stop; so, you know when to leave your house to go get it in the mornings. In the afternoon, it’s great because you can track the bus on a map and see where it is.”

According to Executive Director of Transportation John Franklin, the department’s goal has been to create a better communication system for parents since 2014. The app launched in January 2021.

“We went into design to build our own app for two or three years,” Franklin said. “We ran into some serious design snags, but we tested this particular application twice and did all the prep work. The real true test was on August 25th, 2021. There have been some bus substitution issues, but aside from that, we’ve gotten large numbers of parents who are using it and are grateful for it. The school bus plays such an important factor in how families get their lives rolling and their schedules on time in the mornings.”

While the app has been beneficial to some parents, other parents are confused. Midtown Cluster parent Matt Eckman has encountered problems with the app. After his kids kept coming home two hours late, Eckman stopped using the buses.

“The app does not work for our family,” Eckman said, “Our address is not in the system, and I have tried many times to tell [the administration] this, but they keep saying it will work. I have no confidence it ever will. For example, [the app] will say the bus stopped by our house, and no one was there, and we know for sure that didn’t happen. The communication is bad.”

Howard is making efforts to try to improve communication. Every day, Interim Principal Joy Antone informs parents which buses will not be on time via Remind.

“I have had to call into the transportation department to see what was going on a couple times,” Midtown Cluster parent Heidi Muller said. “Howard often sends out Remind messages at the end of the day noting which buses — normally it’s several — are going to be delayed or haven’t even arrived yet. Thankfully, my son’s bus has never been one of those buses, but every day, I wonder about those kids who are waiting there for their bus for an hour plus.”

Roberts understands and sympathizes with the bus drivers.

“Right now, I am trying to rally a group of parents to support the drivers that we have and just tell them how much we appreciate them,” Roberts said. “Outside of literally recruiting people, there’s not much the PTO can do, but what we can do is try to support the people who are there and be thankful and gracious to our drivers that are there.”

According to Godwin, the conditions on the bus also dissuade students from riding it to and from school.

“The worst part about riding the bus is the fact that the bus is so cramped and crowded,” Godwin said. “There’s never really any open seats. It’s very packed and super hot, which is really uncomfortable.”