Music Midtown back on horizon 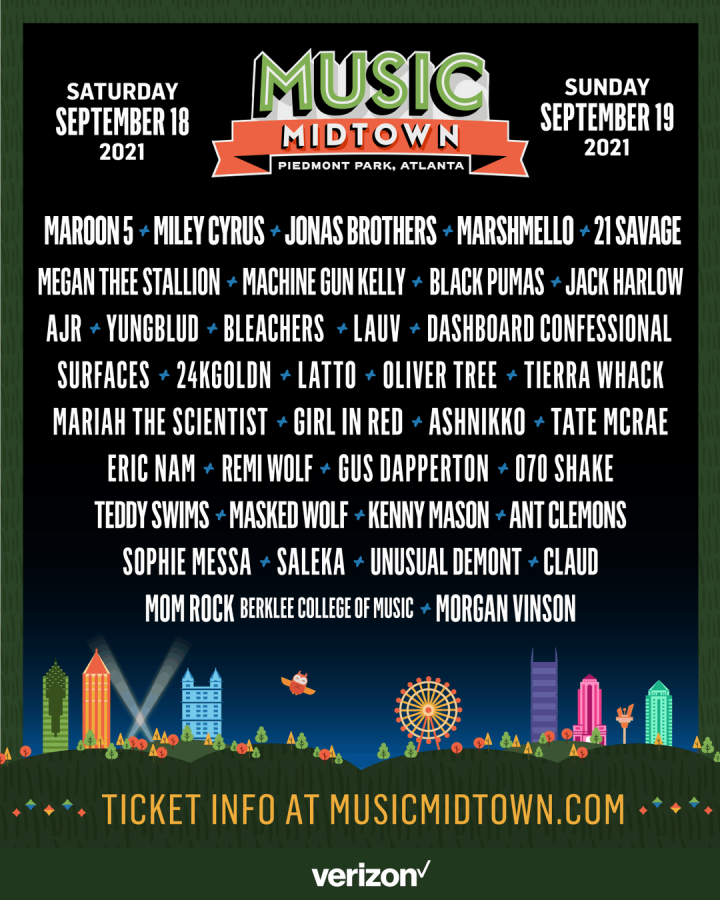 Music Midtown, a two-day event in Piedmont Park, lists over 30 artists for their upcoming show.

Miley Cyrus, the Jonas Brothers, Megan Thee Stallion and more are heading south this September. With the music festival “Music Midtown” right around the corner, many teachers are getting excited for the event.

The two-day outdoor music festival in Atlanta has been put on halt since last year, but it is coming back for its 21st anniversary on Sept. 18 and 19. Band teacher Artis Staton shared that he is still deciding whether to go or not because of Covid-19 risks, but he feels more comfortable because of the event’s precautions. On Aug. 11, Music Midtown made either a vaccine or a negative Covid test, within 24 hours before the event, required in order for attendees to attend.

“It makes it seem a little safer,” Staton said. “But, people can print fake IDs and fake cards. So, it’s more so for the optics, than it is for security.”

Language arts teacher Mario Herrera, who has been to Music Midtown twice, agreed with Staton. Herrera explained that this year, because of Covid-19, there isn’t the normal elation that comes with the return of the festival.

“When I asked my students and my team, there’s not that excitement that there usually is,” Herrara said. “You don’t know the person sitting next to you, or if they’re vaccinated. You don’t know if they care at all.”

Herrera explained how it seems somewhat impossible to ensure that everyone going is either vaccinated or has received a negative test 24 hours before the event.

“I mean, are you really going to check tens of thousands of tests?” Herrera said. “No, you’re not, but I do like the fact that they’re trying to be proactive. I just wish people would stop pretending that there is no Covid.”

Staton explained that, from the students he has talked to, most don’t go to the event and won’t be attending this year. He believes that the festival is an annoyance and a disruption.

“It’s just more so of an inconvenience to most people that go to school here, because it really shuts down the entire surrounding [area] of the school,” Staton said.

Many teachers, including social studies teacher James Sullivan, think that the proximity of the festival to the school is a compelling aspect to the entire event. In the past, all students and faculty were able to hear sound checks from Piedmont Park of famous artists rehearsing.

Junior Mia Garrett will be attending the festival for the first time this year. Garrett explains how in the past, she has been able to see it get set up, and this year, she can finally see the concert in real life.

“I love the thrill that we all get when we see Music Midtown being set up,” Garrett said. “We can sometimes hear the base pounding in class and I see it go up and go down every year, but this year, I finally get to go. It’s extremely exciting because it’s something I’ve been looking [forward] to for a long time.”

Social studies teacher Andrew Copeland, who has been to Music Midtown several times, thinks that it’s important for kids living in the city to experience all that it may offer, which includes this upcoming festival.

“There’s so much culture and art that you gain growing up in a city,” Copeland said. “That doesn’t happen everywhere. So, it’s just a cool thing to be able to take advantage of being next to your school.”

Regarding student attendance, Herrera, Sullivan and Copeland, think that Music Midtown is a fun experience for teens to take part in.

“In normal years, I think it’s fantastic,” Sullivan said. “It’s literally a chance for students at this school to be able to see and listen to some of the biggest musical acts in the world.”

Sullivan explained the anticipation that comes with this event returning because of the missed year during Covid-19 lockdowns. Sullivan said the fact that the event is happening again like it once did annually, is comforting.

“Especially because in the last year and a half, we weren’t really doing anything,” said Sullivan. “I wish that we were all 90% vaccinated so that everybody could do it happily and safely, but I think that under the circumstances we are in, the event happening at all is still something worth celebrating.”