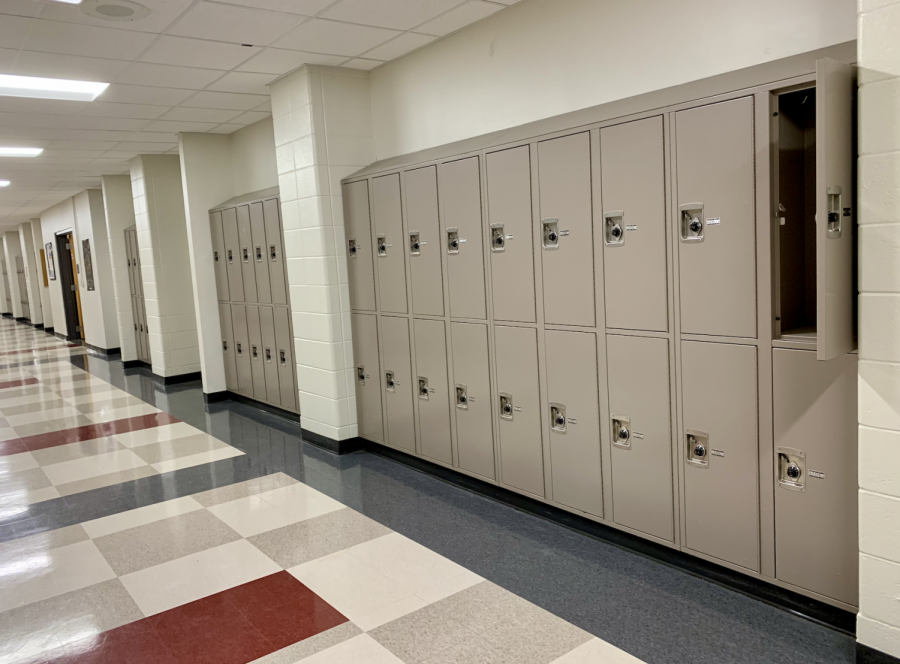 Empty lockers line the halls in the C Building. Students rarely use lockers during the school day.

Lockers are traditionally viewed as an age-old sign of stressed out students, a place to store textbooks and a movie-illustrated location to catch up with friends.

All students know the pressure of trying to remember the combination and series of turns required to open a locker. But now, most students at Midtown don’t remember how to open a locker — chances are they don’t even have one.

This phenomenon isn’t limited to Midtown. Schools across the country are also moving away from using lockers, whether it be student or administration-led initiatives.

Some schools view lockers as breeding grounds for prohibited objects and illegal substances. To combat this, they are removing them all together. This isn’t the case at Midtown, where the move away from lockers is student-led.

Students show little demand for lockers, so unsurprisingly, the new addition to the school did not come equipped with lockers. The number of lockers Midtown has right now certainly is not enough for every student to have their own locker, which shows that the school is not in need of more lockers as the enrollment increases with every incoming class.

Transitions between classes are seven minutes. Midtown is a large school, and even if the student’s locker is on the way to their next class, the student would still be cutting it close. Many students simply carry all of their supplies in their backpack, even on C-days when students have all eight of their classes. Bringing everything home every day also reduces the risk of forgetting a homework assignment that is due the next day. Students would rather carry a weighty backpack around than use a locker.

Schools are being thrown into the modern age of technology at a fast rate.

The 2021-2022 school year is Midtown’s first in-person year where all students are provided their own laptops. Students are required to bring their laptop to school daily. With the addition of the learning platform Schoology, students are assigned little to no work on paper anymore. The lightweight Chromebook replaces notebooks and allows students to carry fewer things, making lockers unnecessary.

Virtual integration has discarded the need for physical textbooks as well. Atlanta Public Schools uses the platform MyBackpack, a virtual hub for learning applications. The platform easily allows students to access numerous apps including online textbooks, making science, language and other subjects textbooks available right on a computer. Students no longer have to lug around heavy textbooks every day, allowing their backpack to be even lighter. If students don’t need physical textbooks, they don’t need a place to store the textbooks either.

Getting completely rid of the lockers would be beneficial and cause little to no disruption. For example, removing the lockers would create more space in the crowded hallways, which would allow for easier social distancing. Locker removal would also allow more space on the wall for murals, club posters and art, improving the ambiance of the hallways.

There are a few cases in which some students do use lockers, whether for sports gear or to put a couple of infrequently used books. Even in these cases, the lockers are clearly not used as much as they used to be. In the big picture, many of the student population do not utilize lockers.

As schools are affected by a modern switch, a lot is changing, including things that have remained traditional in high schools for years. Lockers at Midtown continue to remain pointless due to the increase of technology and little to no demand for them.