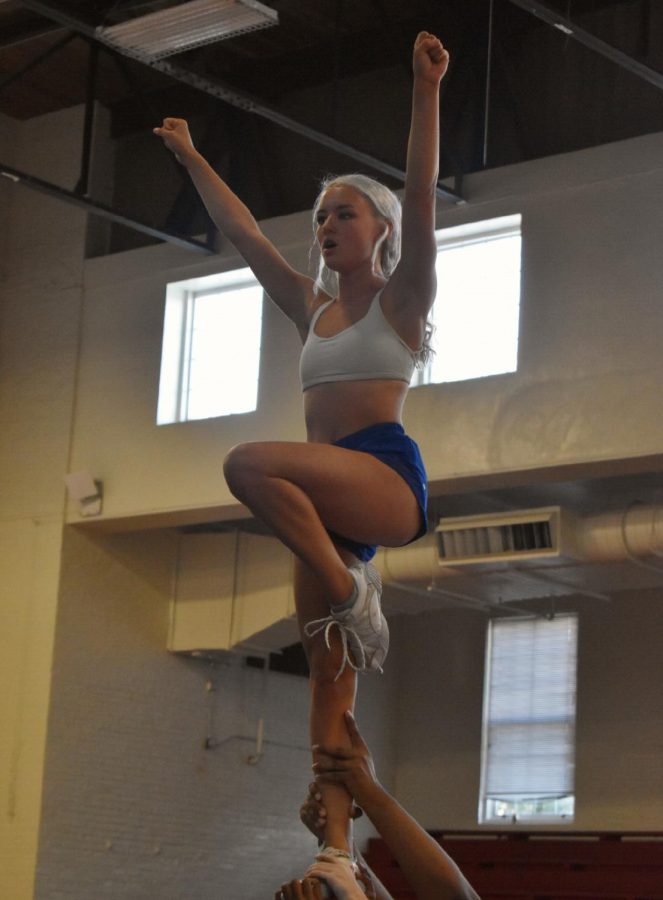 Varsity and competition team member Halden Vale practices a stunt during cheer practice in the old gym. Although the varsity football season was cancelled, the team will still have a competition season.

Senior student government representative Aaliyah Rapping said throughout her four years at Midtown, she never felt her senior Class of 2022 had much of a connection to the school.

“I have a list of ideas of events I’ve wanted to plan in school to help build school spirit because I’ve noticed over my past four years at Midtown that we don’t have a lot of school spirit,” Rapping said.

Many of the events Rapping had in mind involved Friday night varsity football games. Those games have all been cancelled this season due to lack of participation on the team.

“All different types of people from school go to football games; it’s not like just one friend group is there; it’s everyone,” Rapping said. “That makes it very easy to build school spirit amongst large groups of people, but now we don’t have that opportunity anymore. It makes it pretty hard for us to plan events that we wanted to have in the fall.”

Varsity cheer captain Jada Burbridge’s time on the cheer team meant she was already familiar with what she calls a lack of engagement with the student section.

“For past Grady teams, it wasn’t that big of a deal that no one had school spirit because it just wasn’t an expectation,” Burbridge said. “We didn’t expect the team or the student section to interact with us.”

However, Burbridge said she thought this was going to be the year that all of that would change.

“With the new name, we were hoping this year would be our year,” Burbridge said. “This was going to be the year we would start traditions; we were going to start fresh. When I found out about the football team, I lost all hope right then.”

Lack of school spirit has the potential to influence several school activities, not just athletics. In Rapping’s experience, the disconnect between students and the school has impacted the role of student government.

In contrast to Rapping’s four years at Midtown, English teacher Mary Willoughby has spent 38 years at the school. In that time, she has observed how school spirit has changed throughout the years.

“Sometimes, it’s been this sort of traditional, pep, rah, rah kind of school spirit that’s often centered around athletics and that sort of stuff,” Willoughby said. “At other times, it’s sort of a pride in the distinct culture of what was Grady or is now Midtown. That kind of school spirit has dominated at some points; we’ve always had a little bit of an artsy kind of vibe.”

Willoughby said she thinks current Midtown students have a strong sense of pride in the school, even if it isn’t always displayed on the sidelines of a football game.

“In the world of speech and debate in Georgia, we [Midtown] dominate,” Willoughby said. “There is a real sense that the students from Grady or now Midtown have a strong sense of pride and commitment to the school. In Thescon, what is Thescon? there are a lot of events where there is real pride in the kinds of productions that we do and activities we are involved in.”

Nevertheless, Willoughby does not deny that the cancellation of the varsity season has been a blow to the school.

“That was demoralizing, especially for certain groups,” Willoughby said. “My heart aches for the marching band and the auxiliaries because they really won’t have a chance to demonstrate they were really building back.”

In addition to the dissolution of the varsity football team, Rapping said recent changes at Midtown may have disconnected students from the school.

“Midtown has gone through this transitional period over the last four years, with a new principal and a new name,” Rapping said. “Then, of course, Covid happened, so there was a whole year where there were no students in the school. It’s hard to have spirit when you don’t feel connected with your school. A lot of these situations could have caused people to lose connection to the school.”