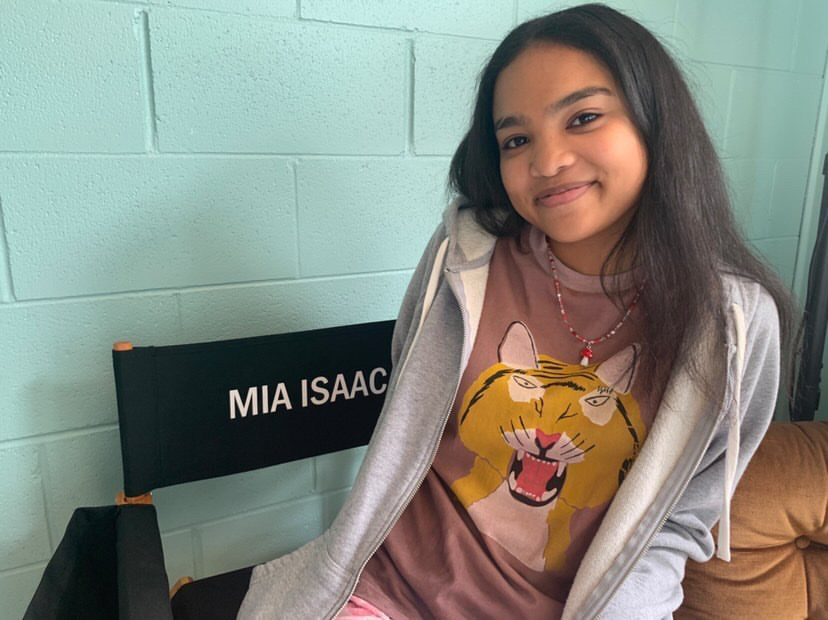 Isaac on the set of "Don't Make Me Go" in New Zealand.

Former Midtown student Mia Isaac never would have guessed she’d have the chance to perform alongside stars.

Isaac began acting when she was 10 years old. She started with booking commercials and print ads before eventually moving on to TV and film productions.

“I have always had a strong love for storytelling and movies, so I begged my parents to get me into the industry,” Isaac said. “They finally took me seriously and brought me to my first agent.”

Though school was a priority for Isaac, she was spending most of her time working and needed to find a new way to balance the two. Halfway through her sophomore year, Isaac switched to virtual school to pursue acting full time.

“As I began to book more roles, I realized the lifestyle I had wasn’t built to support my job,” Isaac said. “I kept getting in trouble at school for my terrible attendance and ended up being extremely far behind on my work. I also wasn’t able to put my best work into auditions because I was juggling so much. After switching to online school, I ended up moving through my schoolwork fast enough to graduate a year early.”

Her switch to online school did not come as a surprise to friends. Senior Chloe Brookshire has known Isaac since fifth grade and believes the switch was a good decision for her.

“Mia’s always been so free spirited and independent,” Brookshire said. “She’s ambitious and works really hard. She has the drive to pursue anything she wants, so I’m glad she’s doing what she loves.”

Isaac was cast in the lead role alongside John Cho in “Don’t Make Me Go,” which was filmed in New Zealand from late 2020 to 2021. While Isaac did not expect her first lead role to be so far away from home, she believes it has been a positive experience.

“It’s been a great learning experience,” Isaac said. “My director in New Zealand, Hannah Marks, was a great mentor, and we got along really well because we had a lot in common. John Cho, who played my dad in that movie, was a great parental figure for me and had a lot of wisdom to share.”

Almost immediately after her time in New Zealand, Isaac left for New York to begin filming “Not Okay,” directed by Quinn Shepard. The movie will feature Zoey Deutch and Dylan O’Brien. She expects to work on the production until September before returning home to Atlanta.

Friends said that, in the future, they see her continuing to accomplish her goals. Isaac expressed an interest in pursuing a career in screenwriting after acting.

“Mia’s always been so ambitious,” senior Ryan Hamilton said. “She’s spent years working hard, modeling and auditioning to establish her name in the acting industry. I can definitely see her fulfilling her all-time dream of becoming a screenwriter in the future.”

Though her career has been full of new experiences, it has not always been seamless.

“It definitely hasn’t been easy,” Isaac said. “I’ve lost a lot of friends and a huge chunk of my social life. Sometimes it’s hard, but I love that I’m pursuing my dreams and committing to it.”

Isaac believes her decision to pursue acting full time was the right choice.

“I’ve had so many great experiences,” Isaac said. “My favorite part is getting to see so many new places and getting to travel. I’ve met some amazing people on set who have a lot of experience in the film industry and have taught me so much.”