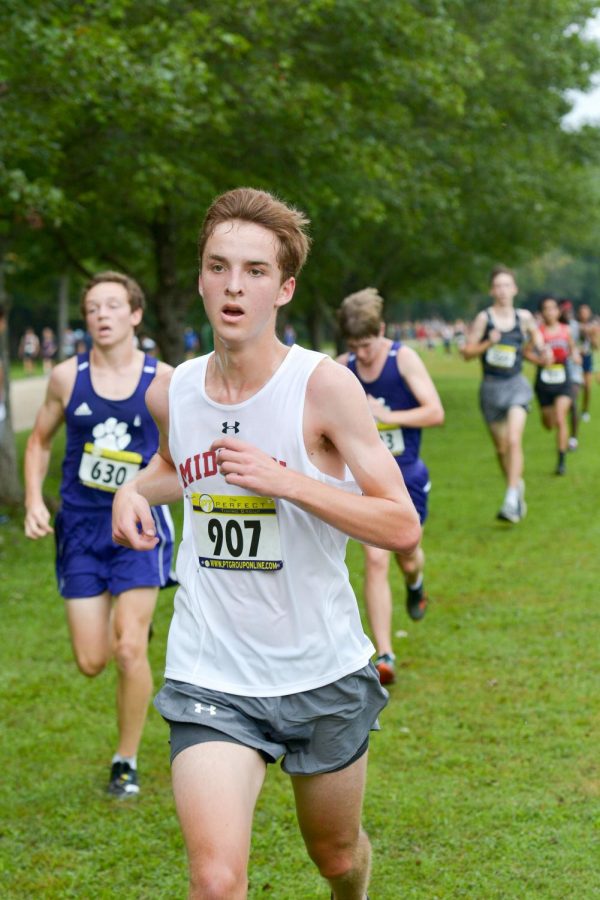 Senior Marcus Johnson runs at the Bob Blastow Early Bird Invitational Meet on Aug. 28. Johnson finished with a time of 18:04 and the team placed 13th.

After a disappointing finish at last year’s state meet, the boys’ cross country team is working to improve.

“The ending of last season was a little disappointing,” senior captain William Palmer said. “We didn’t expect to be nearly as good as the previous season since we lost so many seniors, but it was certainly disappointing; we’d hope to do better, and we want to improve upon that this year.”

Following a third-place state finish in 2019, the boys’ team won the region last year but finished 12th at the state meet. The team hopes the addition of assistant coach Hayes Mohney, who is coaching the boys team, will result in a stronger season.

“Last year, we didn’t have a solely boys coach; so, it’s new having [Mohney] here,” senior co-captain Everrett Schroeder said. “I think he’s influenced [coach Jeff Cramer] to definitely get us in bigger invitationals throughout the year and face more competition in our races which will be interesting, and I look forward to.”

This is Mohney’s third year coaching cross country and his first year at Midtown. Mohney, who came from Shiloh in Gwinnett County, said he’s already working well with head coach Jeff Cramer and the rest of the team.

“There’s a good group of guys,” Mohney said. “I’m trying to get a good balance between some distance runs in there and some easy runs but also practice some speed workouts so that way you can try and do as well as you can at state. [Cramer and I] are very much alike, we’re very much aligned so it’s not that different, we complement each other well.”

Mohney said he will rely heavily on the upperclassmen to be the backbone of the team.

“[Palmer] and [Schroeder] are the people I’m looking at to step up,” Mohney said. “To me, those are the upperclassmen that I’m leaning on to help set the standards.”

With their fastest runner in Schroeder out with a foot injury early in the season and a smaller roster than usual, the team faces an uphill battle.

“We’re not very deep at all,” Palmer said. “With cross country being a team running sport, that’s big. Our depth is just not nearly as good as two years ago when we had guys competing for varsity at the seventh, eighth, ninth, tenth spots on the team, who would now this year be placing top five at the state meet.”

“We got a good amount of new people this year,” Schroeder said. “It’s pretty early in the season, but it’s not uncommon for some of the younger JV guys to have some breakout races and really step up and support the [varsity] team. I’m really hoping that they’ll be able to contribute.”

Palmer said one of the strongest aspects of the team this year will be its chemistry, particularly between Schroeder and junior Zach Spangler.

“Chemistry is really important,” Palmer said. “[Coach Cramer] always really emphasizes to run as a team, and when we race, stick together as a group, work with your teammates to get them through it, rather than just trying to sprint off on your own. Our chemistry is really good since [Schroeder], [Spangler] and I have been working together for a while. We all understand each other’s racing styles and how to corral one another in training as well as push one another in races.”

The team’s season started on Wed. Aug. 25 with a second-place finish at an Atlanta Public School weekly meet at Grant Park and a 13th place finish at the Bob Blastow Early Bird Invitational Meet on Aug. 28th. The season ends early November with the state meet.

“I will focus on [finishing] top three or top five [at state],” Mohney said. “That’s a reasonable expectation, especially with the group we have. We’re trying to get them to the point where they’re developing some much-needed depth by October so that we’re ready by state.”