Critical media consumption necessary in the era of misinformation 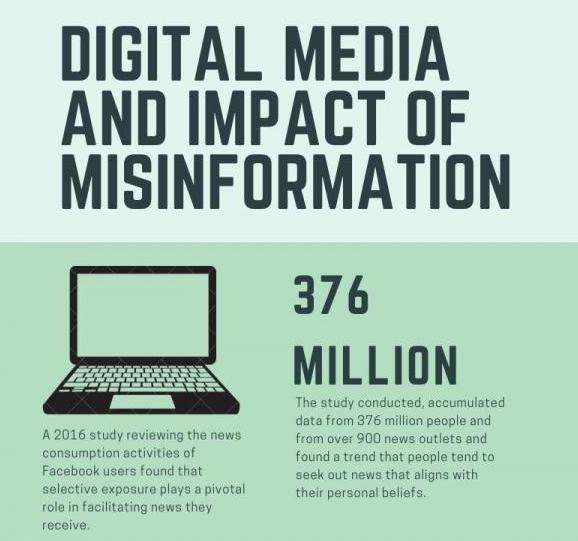 Receiving news from social media and the internet has become enveloped in our daily routines with the rapid advancements in technology worldwide. However, with increasing access to news, comes obstacles to securing accurate information and maintaining norms in an era where anyone can be a journalist.

While the arrival of questionable news validity is not anything new, the implementation of algorithms, news feeds and compilations have created a new obstacle in the fight against subjectivity.  The tools Silicon Valley conglomerates use to keep viewers engaged and addicted to their devices keep users from viewing nonpartisan news sources. An article with a title that shocks a user and feeds into their preconceived biases will always be more engaging than a non-biased, factual article. The ease of receiving news from social media websites via algorithms and updated feeds has bolstered an era of instant news gratification with little regard for factuality.

Andrew Guess, a researcher from Princeton University, found that Facebook only referred users to trustworthy sources 6 percent of the time. In contrast, they led 15 percent of users to untrustworthy sites, making Facebook a key player in the distribution of fake news.

While Facebook has committed itself to the end of fake news, it is clear that the rapid proliferation of unfactual articles has become a problem for media consumers.  The American Psychological Association  found that people are less likely to be skeptical of news that follows their political beliefs. The study concludes that not only are people more susceptible to misinformation if it is framed within their belief system, but they are also more likely to actively consume and seek out similar journalism.

Pew Research Center finds that between political factions, Republicans have become increasingly isolated from the majority of credible news sites, excluding Fox News. Democrats have adopted the opposite position, relying on news sources typically viewed as “credible” and even strengthening their support of these sites.

However, the problems don’t stop there. Time Magazine found that with Facebook and Google dominating online ad revenue, news outlets have to begin reorganizing and seeking out viewership from loyal customers. Time found that less popularized and more objective articles sell less compared to sensationalized articles.

With more than one in eight Americans getting their news from digital devices, it has become vital for news outlets to meet this growing digital demand. However, it is also essential for news outlets to balance gaining readership with remaining partisan. Striking a balance between the two will become crucial for the continued proliferation of critical news alongside the upholding of journalistic ethics.

News outlets need to promote the reinstatement of critical readership and lead the fight against online outlets that reaffirm their audience’s beliefs. Moreover, news readers and writers must stay vigilant against news that contains the lure of reaffirming our beliefs.