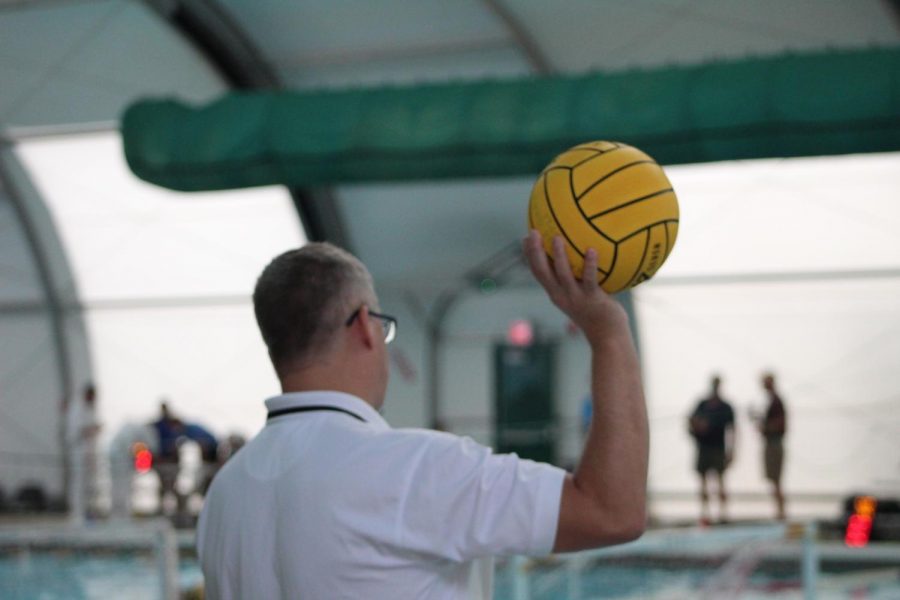 A water polo referee holds a ball during timeout.

The Atlanta Public Schools Knights water polo team fell to the Wheeler Wildcats on Aug. 15 during their fourth game of the season, moving them to a record of 1-3. Despite the initial losses, the team has confidence  that they will build momentum as the season continues.

“After each game I noticed a pretty drastic change in the performance of the team,” Cale Coleman, a player on the APS Knights A team said. “As a team we are learning how to play together pretty well.”

The water polo team recruits players from grades 6-12 across all Atlanta public schools. Like many other teams, the team has struggled during and after the pandemic to recruit new players and retain previous players. As a result, the team’s roster is nearly half the size of what it was two years prior with just 29 players.

“This season has been a challenge,” Coach Stuart Sheldon, who has coached APS water polo for over a decade, said. “Two years ago, before Covid-19 we had probably 50 kids between the boys and girls side, we graduated a couple of key players and we had a number of key players not come back, and Covid-19 has made it very hard for us to recruit new players.”

Though Covid-19 has emphasized the team’s recruitment problems, they are not new. Water polo has historically been a small sport in Georgia. There are thirteen high school water polo programs across the state, compared to the nearly 400 high school football teams. Water polo has been only a club sport since it was brought to Georgia high schools in 2006.

“They’ve had scholastic water polo in Texas for 40 years and they’re going varsity next fall, expecting 200 high schools with teams of 30,” Sheldon said. “In Georgia, dozens of schools would immediately add it because it comes right before swim season, because of the overlap.”

For APS water polo players, a 30 person team at each high school is far from reality. The Knights have thirty players total across all Atlanta public schools that make up their three teams.  The Knights average 10 per team, while non-APS schools like Pius, Chamblee and Norcross fill out their rosters with 13 players per team

“This is my first year playing water polo,” Cj Fucile, a sophomore on the APS B team said. “I wasn’t really surprised that the team was small but I was surprised that the schools we played had bigger rosters than us even though we pull from a couple different schools.”

In addition to a historically small roster, the team has been challenged with finding practice space due to Covid-19 restrictions.

“We historically have practiced at the Washington Park Aquatic Center down near the Atlanta University Center,” Sheldon said, “and that pool has basically been closed to us for two years due to COVID. So we’ve had to kind of start completely over with practice facilities and everything.”

Sheldon said that the bottom line is getting people to come out and try water polo, but with a small presence in high school sport and club sport status, that is easier said than done. Despite the adversity the team has experienced, they continue to persevere and hope to pick up wins after they return from a recent Covid outbreak.

“I think of the team as a herd of zebras. When you look at them in total, they’re all white with black stripes. But if you look at them carefully, no two zebras have the same pattern,” Sheldon said. “When you see a group of 10 kids walking down the hallway, each of them, they’re all friends, each of them does something that the rest of them don’t do. Somebody in drama, somebody in Latin, someone sings in the church choir, so they’ve all got something they do that’s unique. I think that’s part of what initially brings people in because it’s not really something that a lot of kids in Georgia grow up playing at all.”