Athletes work in the summer to get ahead 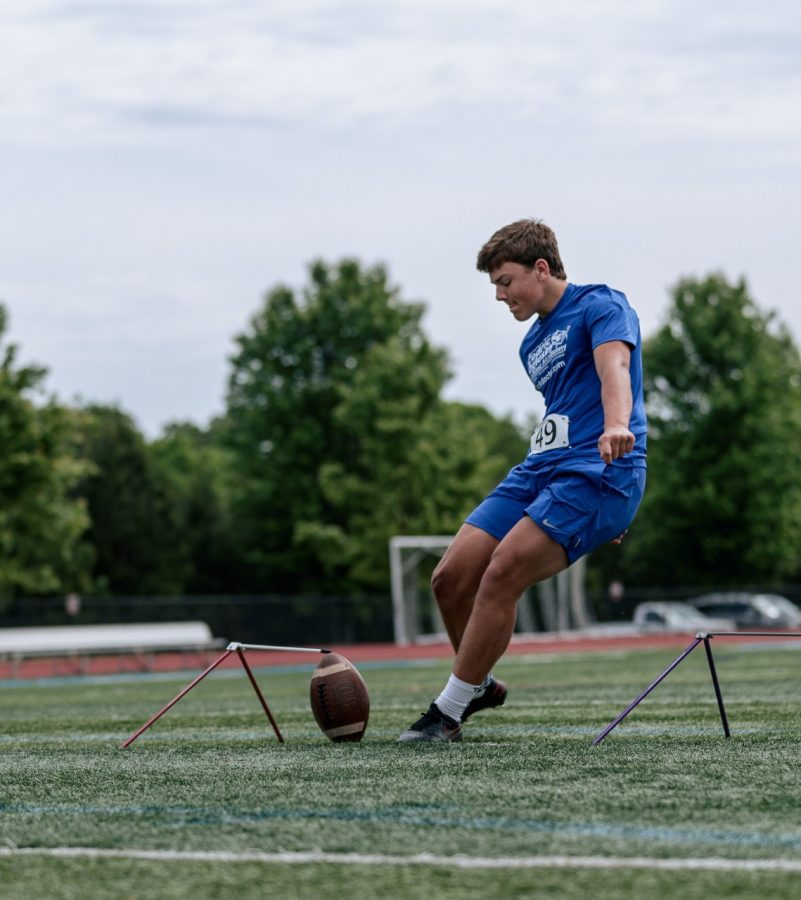 Junior Roswell Bond is seen kicking a field goal. Bond spent the summer kicking in college camps around the south.

In the sports world where first and second are differentiated by a small margin, practice and experience are essential. A select group of athletes adopt this mentality over the summer to get ahead.

Fall sports — including football, volleyball and cross country — start immediately after the return to school and student athletes are encouraged to begin training over summer vacation.

“It’s pretty typical that a fall sport like cross country trains over the summer,“ freshman runner Sierra Pape said. “However, it’s rare that a full team trains [together].”

Pape said the Mitown team was fortunate to have a dedicated head coach in Jeff Cramer, who regularly showed up to the morning runs over the summer. Pape also participated in the Peachtree Road Race, a local 10k, in preparation for her upcoming season.

“What you do in the summer is 80 percent of your success,” Pape said. “Building your base is very important and helps ensure a head start during the season. During the summer, it is important to get many miles in.”

Junior Roswell Bond, the kicker on the football team, attended summer workouts with the school and participated in college kicking camps hosted by Georgia Tech, the University of South Carolina and Auburn University.

“The camps help you get exposure at a college level and help aspects of your kicking you are lacking at,” Bond said. “They gave me pointers to improve my form and range. The camps are also competitive preparation to help you get better at kicking under pressure. This is a big thing that can help me this season.”

“Most of the summer part was based on … AAU,” Walker said. “People come across the country to come to a convention center in Florida.”

In addition to club volleyball, Walker participated in school summer workouts, which she said better prepared for the season than years prior.

“It helped me by playing volleyball constantly,” Walker said. “I had repetition of skills, and I refined them. It was good to be ready to go for the season.”

Sophomore Ryan Carter’s school lacrosse season only lasts through the spring but that didn’t stop her from playing in summer to continue to improve. Carter plays for Eagle Sticks, a travel club team that competes during the summer.

Carter said her experience playing club lacrosse puts her at an advantage over other student athletes.

“Club [lacrosse] is more competitive because you are playing people from around the country who take time out of their summer,” Carter said.

Carter believes the year-round practice provides a leg-up on her opponents when spring rolls around.

“I like to play lacrosse year-round,” Carter said. “I like to continue to improve all year, and club helps me with that. It keeps you warmed up and allows me to make sure I’m still in the groove before I go back to school lacrosse.”