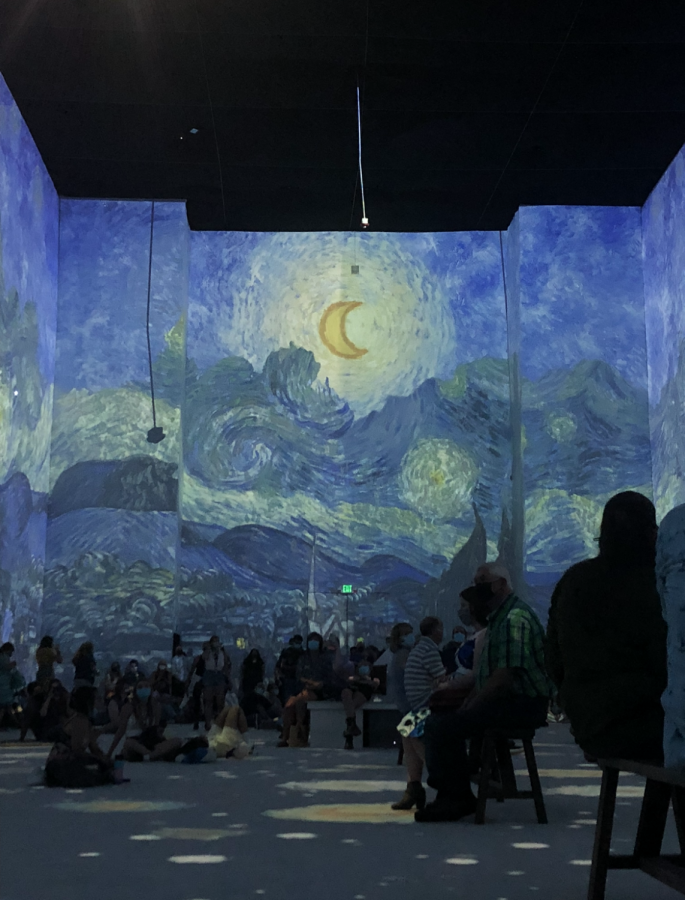 With new developments at Pullman Yard, the Vincent Van Gogh interactive art exhibit attracts attention. What was once an abandoned train yard is now a multimedia event space that all of Atlanta can explore.

From its rich cultural history and use as a movie set, Pullman Yard’s heritage expands over a long period of time. Kwa Smith, a guest patron at the exhibit, gained a deeper understanding of his workplace as he oversaw guests.

“Some history that I learned about Pullman Yard was that it was one of the best jobs a black man could have in the 40s and 50s because you’re working in a train yard with really upscale clients,” Smith said. “There were more benefits there than other jobs that were around, and it was an important historical landmark. The railroad tracks are still there. Even looking at the building, you can see how the ceilings aren’t modernized, and it really is an old train yard.”

As guests walk through the exhibit, they are exposed to Van Gogh’s daily life and his many inspirations. Because of Pullman’s widely-spaced guest area, participants are able to walk around as they explore the many moving parts of artwork.

“I didn’t really know what to expect,” said Tatum Dutton, a senior and exhibit attendee. “I’ve never been to an art exhibit quite like this, but I was pleasantly surprised by what it was like.  It was a really interesting experience to see the art come to life in a 3D way with the projecting and everything. I definitely feel like I learned a lot about Van Gogh and his career as an artist.”

For an added fee of $5, guests can experience virtual reality on top of their $32.20 ticket price that allows them to view a 360-degree transportation back to Van Gogh’s time of 19th-century France with narration that provides a backstory on how the pieces came to be. Smith found that many guests had never used a virtual reality headset before, and were amazed by its features.

“You’re walking through the town of Arles, France and you get to see a lot of the moments that led him to create certain paintings,” Smith said. “For example, there’s a painting where a guy has his arms behind his back, and he’s laying on a haystack. You can see how [Van Gogh] saw that and took inspiration from it. With “The Starry Night,” I believe he was outside his house or the institution he was staying in when he saw the view of the town and the big cedar tree, and you can see his ah-ha moment.”

Social media advertisements promoted the exhibit and attracted people from all over Atlanta to experience the interactive, large-scale artwork.

“The crowd was definitely diverse,” Dutton said. “There were people of all ages and people of every background.”

As the exhibit draws more attention to the area, Pullman’s own restaurant, the Abby Singer, has reaped the benefits of new customers.

Eva Young, a hostess at the restaurant, has seen first-hand the impact of the increasing number of people in the area.

With the Van Gogh exhibit coming to a close at the end of 2021, the exhibit hopes to keep its customers with new art pieces, potentially by Claude Monet. Monet was an established French impressionist painter in the early 19th-century.

Customers hope the exhibit is just the beginning of more immersive art pieces around the Atlanta area.

“It’s an interesting way to see art,” saidWalker Land, a junior who attended the exhibit. “They have another place on the BeltLine that’s similar, but the Van Gogh one was a lot cooler. They did a good job of managing where they put all the people, so you could still observe everything and be peaceful.”