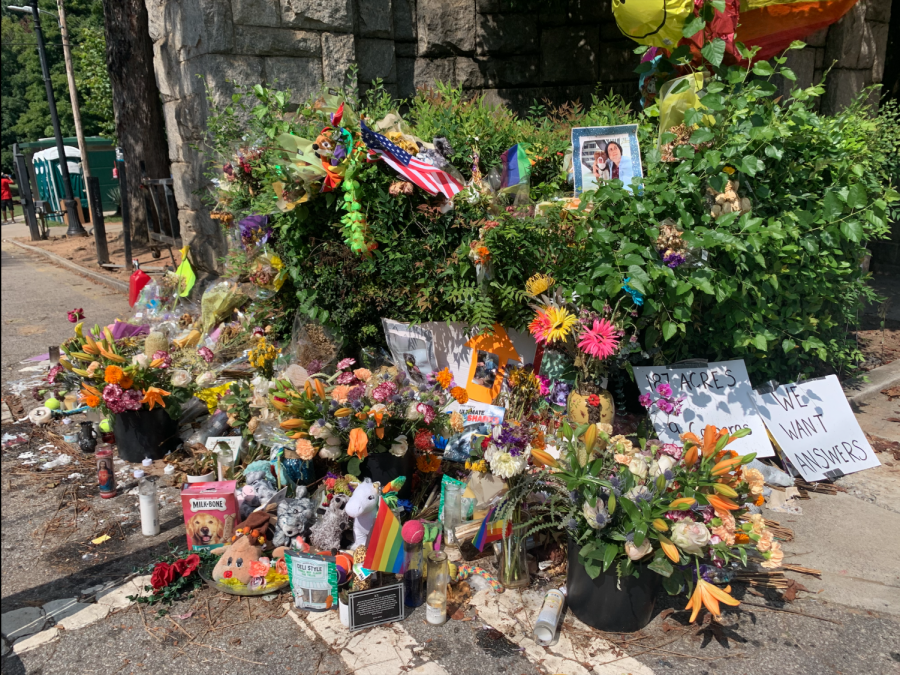 The memorial of Katherine Janness and her dog Bowie lies near where they were found dead in Piedmont Park. The killer has yet to be identified.

It has been nearly a month since a woman and her dog were found brutally stabbed to death just across the road from Midtown High School. With the person responsible still at large, some students are concerned for their safety.

“It’s nerve-racking knowing that a killer is on the loose,” senior Jamie Roode said. “This is the kind of stuff that I watch in “Criminal Minds.” It really shouldn’t happen in real life.”

In the early hours of July 28, Midtown resident Katherine Janness left home to take her dog Bowie for a walk in Piedmont Park. When neither returned home, her worried girlfriend pinged Janness’s phone’s location and found them dead near the Piedmont Park entrance on 10th Street.

The case shocked the Midtown community and residents want to know how someone could get away with such a brazen crime.

Senior Cassie Maggard lives on the opposite side of the park from the crime scene.

“Since the murder, I haven’t been walking at night,” Maggard said. “I try not to be coming home super late from anywhere, and I am just more vigilant altogether. This was an awful occurrence, and I really hope that they catch whoever did this.”

Roode works at Sean’s Heart of the Park, which is located not far from where the two bodies were found. The restaurant is taking new precautions since the murder, especially for those working later shifts. According to Roode, employees have been told to return to their cars together and walk in the street where lights and cameras are present.

“I know that they’re taking precautions, which is assuring, but still, of course, you’re going to be scared,” Roode said. “I mean as a girl, it’s terrifying literally anywhere. And after the murder, [there is] no way that I want to walk over there. It’s still really scary.”

After the murder the Atlanta Police Department reported that Piedmont Park has only nine surveillance cameras, which are outdated and not integrated with the APD. The Atlanta City Council has since voted to approve the installation of more cameras in the city’s parks and recreation areas. Two hundred fifty cameras are to be installed in the city’s recreational areas by the end of the year.

Sophomore Cary Schroeder is on the cross country team which practices six days a week in Piedmont Park. The team often runs past Janness and Bowie’s memorial tribute on 10th Street where they see flowers, dog treats, photos of the victims and other items.

“I don’t feel comfortable running alone, but I feel like if I’m in a group, then it’s kind of safety in numbers,” Schroeder said. “I also don’t think I would ever go to that park at night ever again.”

Schroeder has never worried about something as simple as running with earbuds until recently. She and her teammates are now more focused on staying aware of their surroundings while outside, even when running in large groups.

Some female students carry self-defense devices such as mace or pepper spray or have taken self-defense classes. Despite this, some still feel unprepared to face an attacker and worry they will find themselves stuck in an unsafe situation.

“I definitely feel that women are more at risk because a woman was murdered,” Roode said. “In broad daylight, when I go into the areas of my neighborhood that don’t have as many people or [I] am on paths, it’s still scary, and it’s just because I feel like women are victims of a lot more gruesome and violent crimes like this.”

After the murder, Roode said she feels “very unsafe” when outside no matter the time or her location, and says she will likely begin carrying her pepper spray in her hand instead of her purse.

“All I have is my pepper spray that I’ve never used once,” Roode said. “I never want to have to use it, but I feel like I’m going to have to.”

The last time someone was murdered in Piedmont Park was in 2009, and the case remains unsolved. The community is vowing to keep Janness and Bowie’s case in the spotlight and want the killer brought to justice.

“To all the guys who are going to read this story, just make sure that you protect your female or non-binary friends, and make sure that you’re keeping them safe,” Roode said. “If a murderer sees you with a man, there’s probably a lesser chance that they’ll attack. The [Midtown High] community really needs to become a community in that sense, where you’re looking out for your peers and trying to keep them safe no matter the circumstance.”