the Southerner Online • May 18, 2021 • https://thesoutherneronline.com/83428/nexus-feature/passion-for-movies-and-music-grows-in-quarantine/ 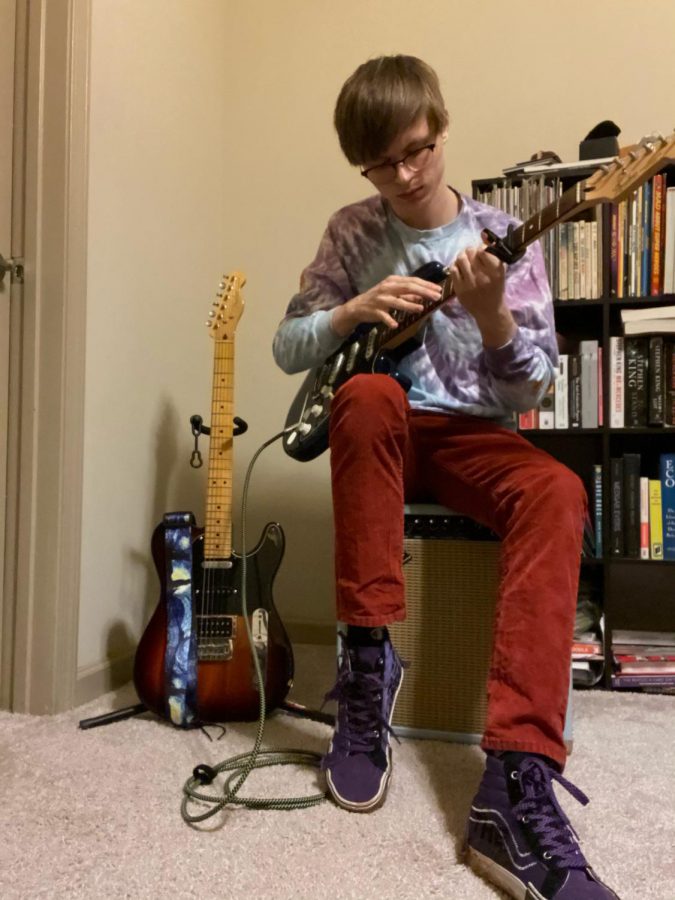 Matthew Vincent often takes time in between classes to play with his guitar and see what new sounds he can create, and whether they are worth adding to a new composition.

Music and movies are providing a creative escape for many students who are left with added free time.
Many extracurriculars and interest groups have been cancelled or cut short due to Covid-19 protocols. Students who don’t have a space to explore hobbies with like-minded people are having to turn to their own devices, but a shared passion for the cinematic and musical arts is keeping students occupied.
Senior David Montoya has used movies as an avenue to stay in touch with friends.
“We just pick up a movie on a streaming service and everyone watches it by Monday,” Montoya said. “We then go in a circle on facetime and discuss them.”
Montoya admits that sometimes the conversations can digress, but these movie discussions allow him to stay in touch with his friends and keep entertained.
Montoya looks for movies that are either critically acclaimed or a box-office flop. He has always had a particular fondness for “campy,” which contain intentionally exaggerated thematic elements.
“When I think of a campy movie, I think of a horror movie that is cheesy and stupid,” Montoya said. “But they are just really fun to watch.”
For this reason, Quentin Tarantino’s “Kill Bill” movies are some of his favorites. Montoya says that sometimes a movie’s storyline doesn’t have to be good. In the end, he is just looking for the movie-watching experience to be memorable.
While Montoya watches productions for entertainment, some find themselves entranced by the world of music. Students like Junior Matthew Vincent have taken their love of music to new levels.
Before the pandemic, he would practice with friends and could even be heard playing with the school’s jazz band, but even without those opportunities, he is not deterred. Now, he has broadened his horizons in many ways, starting with the discovery of a particularly unique genre: math rock.
“It’s a very guitar focused genre, and it’s a lot different from what I usually listen to so it’s helped me expand my guitar playing,” Vincent said. “It’s like emo-rock but it’s got very technical guitar parts.”
His discovery of this new genre came from an unlikely source.
“Quarantine is kind of directly why I got into math rock,” Vincent said. “I was looking for some online communities to hang out in since you couldn’t do it in person. I met this guy from England that got me into math rock.”
Despite being nearly 4,100 miles away, 22 year old music fanatic, William, who he has met online, has helped him expand his musical interests.
“He’s given me a lot of advice on different uninhabited music to listen to,” Vincent said. “I literally wouldn’t have done it without him.”
William (who chose to not give his last name), living in London has been impacted by music throughout England’s more strict quarantine protocols.
“Music has honestly saved me during quarantine,” William said. “England is coming up on being in quarantine for one year. Being able to escape the awful news that we were just bombarded with daily was quite honestly amazing.”
He has especially benefited from finding like-minded people like Vincent.
“The ability to meet others that love the same kind of music as I do, it just makes lockdown and all of Covid so much more bearable,” William said. “Seeing as I can’t go out and meet others that play guitar – this has really been a saving grace.”
Not only has Vincent been introduced to new genres through meeting William, but those new influences have in turn helped his own lyrical writings.
“Math rock uses a lot of different tuning systems, so you literally do have to relearn to play because the notes are in completely different places,” Vincent said. “It makes it a lot more fun to play, and it’s helped me become a lot more creative in my writing style.”
Having to “relearn” a way to play has kept him nearly inseparable from his beloved instrument.
“The added time has helped a lot, Vincent said. “I spend most of the day with my guitar at an arm’s reach so I can pick it up whenever I want. Most days I’ll probably spend a couple hours combined just messing around with it.”
Becoming more in touch with his art form has allowed Vincent to stay occupied nearly every day of quarantine.
“I think my favorite thing about music is the creativity,” Vincent said, “it’s great to just be able to dream up something and then see what crazy ways you can go with it.”