the Southerner Online • May 18, 2021 • https://thesoutherneronline.com/83427/nexus-feature/eating-disorder-awareness-week-sheds-light-on-struggles/ 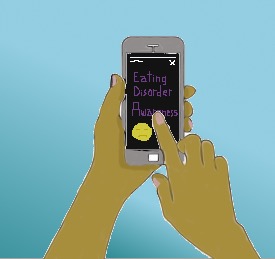 Eating disorder awareness month has brought attention to the struggle that many teens face everyday.

New societal pressures are perpetuating eating disorders among youth, and a myriad of effects are being experienced during the pandemic.
Senior Zoey Phillips spent a year researching eating disorders through the lens of the Female Athlete Triad.
“They are a lot more prevalent than we think especially among teenage girls,” Phillips said. “There is no education about them, and it’s just really sad.”
Phillips believes that with a little knowledge, both boys and girls could escape from the stigma of “needing” to be thin.
“It’s wrapped into our culture and society that girls have to be thin,” Phillips said. “It’s disappointing, but it’s the reality.”
Emily Green, a licensed professional counselor and psychotherapist, said that these societal pressures could impact anyone.
“The mental pressures are likely familiar to you, just as they are to me and most,” Green said. “The environmental, cultural obsession with thinness for women and a 6-pack pressure for men is often propagated by the media, as well as peer and familial messages about weight.”
National Eating Disorder Awareness Week, which occurred from Feb. 22 to the 28, allowed people to understand the prevalence of eating disorders. Many students posted informative links and shared them through social media to educate their peers on these disorders. However, for those struggling with an eating disorder, the multitude of weeks in quarantine and off-kilter schedules has created more problems.
Senior Molly Linstrum has struggled with an eating disorder for years.
“I heavily restricted my eating from the ages of 12 to 17,” Linstrum said. “At one point, I was eating about 500 calories a day.”
Throughout this journey, she has come to intimately understand the struggles of having an eating disorder.
“People experience eating disorders for a variety of reasons,” Linstrum said. “Sometimes it’s a genetic disposition or it’s a person’s environment. A lot of the time, it’s about control rather than the actual act if not eating.”
Green explained this idea from a psychotherapist standpoint.
“Mental pressures could include anxiety, fear, perfectionism, impulsivity, often associated with binge eating and purging, irritability, low-self esteem, rocky relationships, etc,” Green said. “Serotonin levels may also be involved, which of course is a hormone that also influences mood.”
Linstrum’s driving force was fueled by negativity directed towards her from her peers.
“I experienced some bullying when I was younger about my weight and grew up in a home where dieting was common,” Linstrum said. “So that likely had an influence.”
School introduced her to an insecurity about weight, but the set structure of in person school made it harder for her to skip meals.
The progression of Covid-19 itself is linked as a source of mental stress for youth that could lead to a disorder.
“I believe that the ongoing stress of Covid has impacted each of us in some way and essentially intensified our respective biopsychosocial struggles,” Green said. “For most of us, Covid has brought some level of anxiety and fear, impeded our ability to engage in relationships and access social support.”
Now that online school is the norm, Linstrum has less of a structure to keep her to a regimented eating schedule. This has made it easier to skip meals but also allowed for self reflection.
“It definitely did initially [harm], but it also forced me to confront it head on because it became very damaging to my life and wellbeing,” Linstrum said. “I knew that if I didn’t stop at that point, I wouldn’t end up anywhere good.”
While Covid-19’s aftermath has contributed to a perpetuation of eating disorders, for some students it has been a wake-up call to address their problem.
However, for those still struggling, Green has words of advice when approaching a known eating disorder.
“I would instead encourage the idea of mindful eating,” Green said. “Personally and professionally, shifting from the weight-focused/diet-culture toward mindful eating is the way to go.”