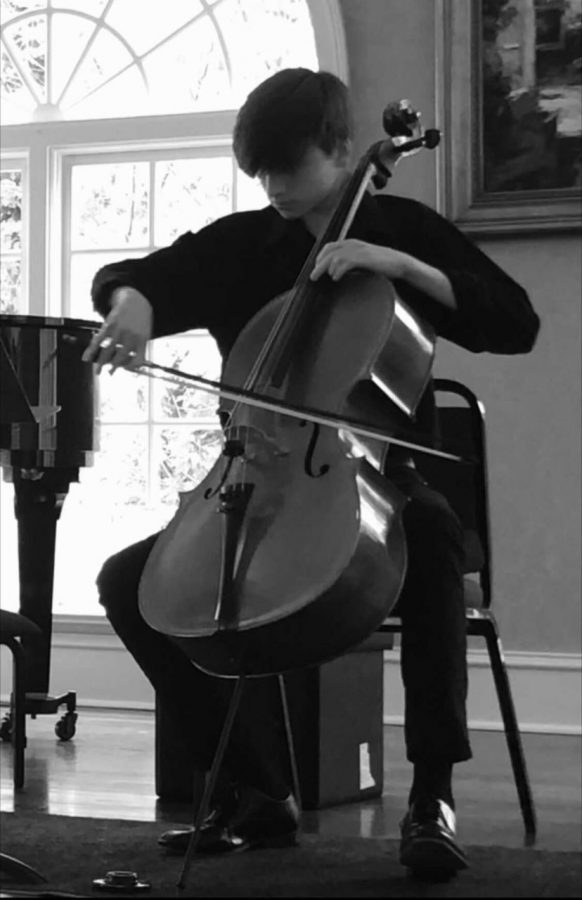 One young musician’s dream is a Grady junior’s reality: Jonathan Fuller was accepted into the highly selective and prestigious National Youth Orchestra of the United States of America, based in New York.

After an extensive application and rigorous selection process, junior Jonathan Fuller has been accepted to play the cello for the National Youth Orchestra of the United States of America (NYO-USA) at Carnegie Hall.
“I don’t think I’ve ever been more excited about something,” Fuller said.
NYO-USA is a very selective three-to-four-week summer residency program that brings together and trains some of the most talented young musicians from around the country. These youth musicians, ages 16 to 19, work with top professional instrumentalists from reputable orchestras and, every year, travel to global music capitals.
This year, approximately 800 of the most talented young musicians from 33 states across the nation applied to NYO-USA. About 100 students were accepted, and four are from Georgia.
“We’ve had students from Atlanta previously, but we believe Jonathan is the first to be selected for NYO-USA from Grady High School,” Jami Jurich, a Carnegie Hall spokeswoman said.
Fuller was selected as one of 12 cellists. According to Jurich, “the cello is the most selective of the strings section.”
Each summer, a well-known guest conductor presents during the program. This year, the guest conductor is the respected Sir Andrew Davis, conductor of orchestras in Melbourne, Toronto, Chicago and the BBC Symphony Orchestra, who Fuller is excited to work with.
“This acceptance into NYO-USA is definitely a huge deal for me,” Fuller said. “It’s something I’ve always wanted to be a part of, and I never would have thought I’d be lucky enough to actually participate in it. The things I’ll learn and the experiences I’ll have will definitely stick with me throughout my life.”
After their opening concert at Carnegie Hall, the National Youth Orchestra has routinely toured a different section of the globe during the three-to-four-week program. In the past, the orchestra traveled to Asia, Europe and Latin America. Due to Covid-19, there aren’t plans for NYO-USA to travel abroad during this summer’s program, but Fuller is still thrilled to go to New York. The residency will still take place on the campus of Purchase College, State University of New York.
“We are exploring the possibility of limited concerts nearby if health conditions allow performances with public audience to resume,” Jurich said.
Getting into the National Youth Orchestra is the most recent highlight of Fuller’s music career, but he began on the cello at an early age.
“When I was around 4 and a half, my mom wanted me to start learning an instrument, and she chose the cello (her favorite string instrument),” Fuller said. “I sort of just went along with it, and now I couldn’t see myself playing any other instrument.”
In addition to Grady’s Philharmonic Orchestra, Fuller is also part of the Emory Youth Symphony Orchestra and the Atlanta Symphony Youth Orchestra Digital Academy. In his free time, he likes to read and skateboard but playing at his advanced level has taken consistent practice, time and hard work.
“I’m lucky if I get a couple hours of practice in each day,” Fuller said. “I would say that the years of practicing the cello daily have  helped me build the skills needed for this audition. I would practice the required excerpts and solo repertoire for a couple months prior to the audition and would have lessons on those excerpts.”
Grady orchestra director Krissi Davis has taught Fuller since he entered Grady as a freshman. She wants her students to be aware of opportunities and foster their growth as musicians, but said Fuller’s motivation is a deeper drive. Davis describes his work ethic as “unparalleled.”
“Jonathan is obviously a very talented musician,” Davis said. “This is one of the most difficult orchestras to get into. Honestly, as much as I would like to think I play a factor in motivation, to play at that high level requires more intrinsic motivation than outside motivation from teachers, parents, peers, etc. You have to want that for yourself. From what I know about Jonathan and his musical background, he decided at an early age that he wanted to be the best possible cellist he could be, and he puts in the work to get it done.”
Like any young musician, some days Fuller is less motivated to practice than others and can get anxious ahead of performances.
“I definitely get nervous when performing, which is perfectly normal,” Fuller said. “I know that the more opportunities I take to perform, the more comfortable I will be on stage. The most nerving performances for me are live auditions … I think any experience you have in music, good or bad, is something to learn from, and you will only improve from it.”
The cello has introduced Fuller to new people and brought life-changing opportunities.
“I particularly enjoy playing chamber music in small ensembles,” Fuller said. “The relationships and connections I’ve made through chamber music are amazing.”
What the future holds is unknown, but Fuller knows he wants to continue in music. This most recent accomplishment, acceptance into NYO-USA, takes him one step closer to where he wants to go.
“I’m hoping to go to school for music and the dream after that would be to have a position in a professional orchestra,” he said. “Obviously, I have no idea where I could be in 10 years, but that’s what I’m striving towards right now.”