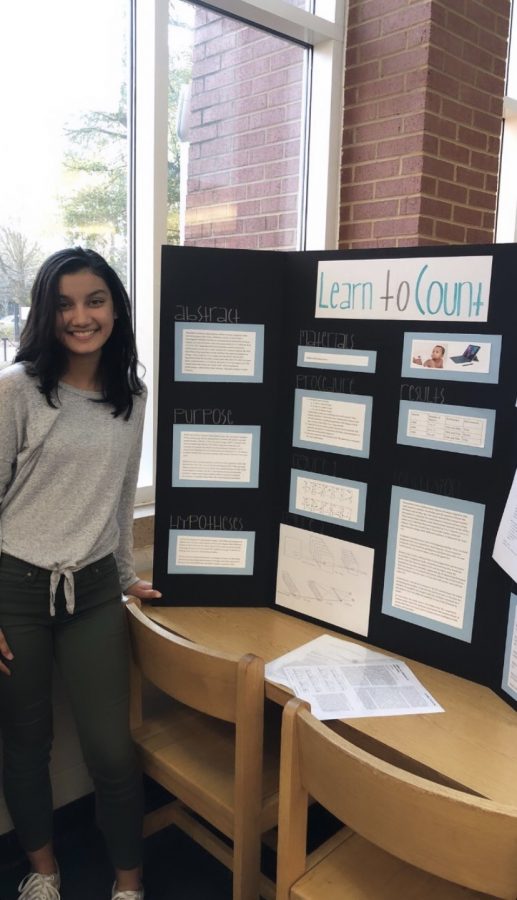 The Atlanta Regional Science and Engineering Fair proved successful for Grady students.
Juniors Christopher Walker and Nathan Rachwalski, as well as sophomore Sofia Vempala, were Gold Key recipients, juniors Audrey Isakov and Lindsay Ruhl received the Silver Key, sophomore Siena Claudio received the Bronze Key and sophomore Sara Prevost received an honorable mention.
Walker’s and Rachwalski’s project will be one of four representing the Atlanta Regional Science and Engineering Fair at the international level. Their project studied how accurately one could predict the NFL draft using a player’s measurables, such as speed and weight.
“Being one of the top four projects at the fair, we get automatic advancement to the international fair,” Rachwalski said. “We technically get to skip over the Georgia fair, but we decided to participate anyway. There’s no reason to give up an award we could win at the state level. We’re not going to be doing any more work on our project to win those awards because we’ll already be doing it for the international fair.”
Vempala will represent the fair at the state level with her coding and engineering-based project.
“My project this year is a development of last year when I coded a special type of computer program called a neural network,” Vempala said. “This year, I expanded that program along with writing a few others. Basically, I tested whether I could teach a machine with zero knowledge whatsoever to solve a series of different number tasks and experimented to find which conditions made testing accuracy the highest. I also compared my findings to human research by conducting a survey with Grady students.”
The event took place completely online, using online forms, registrations, meetings, projects and presentations.
“Everything was different about the fair because of the pandemic,” Isakov said. “The competitions were virtual, making it harder to converse with your judges. The testing processes were dangerous, and the new strains of Covid made it difficult for my team to go to our locations to conduct more research. Any immersive science project had a really hard time collecting data safely.”
In response to Covid, students entering the fair completed a liability form before developing their project and registering as a competitor. From there, entrants could begin to work on their projects.
“The process to submit our project was overall pretty painless,” Rachwalski said. “We had about two months to work on it, and we did most of the work in two weeks. From there, we had to make a short presentation, submit a bunch of forms and make a PowerPoint. Our research was most of the project and actually making the physical project was only a little bit of it.”
The science fair begins at the school level, and if students win, they move to the regional or district level. After that, they must succeed at the state level before advancing to the international fair.
Through individualized meetings discussing ideas with students, science teachers provided guidance during the process. Vempala credits chemistry teacher Jormell Cofield as her “main support.”
“She was my teacher last year and helped me out then [for last year’s science fair] and continued to help me this year. She coordinates everything, and if I ever have a question, she’s who I ask.”
Although an official award ceremony has not been scheduled, students received the satisfaction of completing and showcasing a project they were proud of.
“Overall, I think the science fair was a really positive experience,” Rachwalski said. “Part of that was probably because I did a project about something I’m actually interested in, which is probably the most important thing when you’re doing the science fair. You want to communicate to the judges that your project is truly your work, something you’re interested in and something you’re passionate about.”