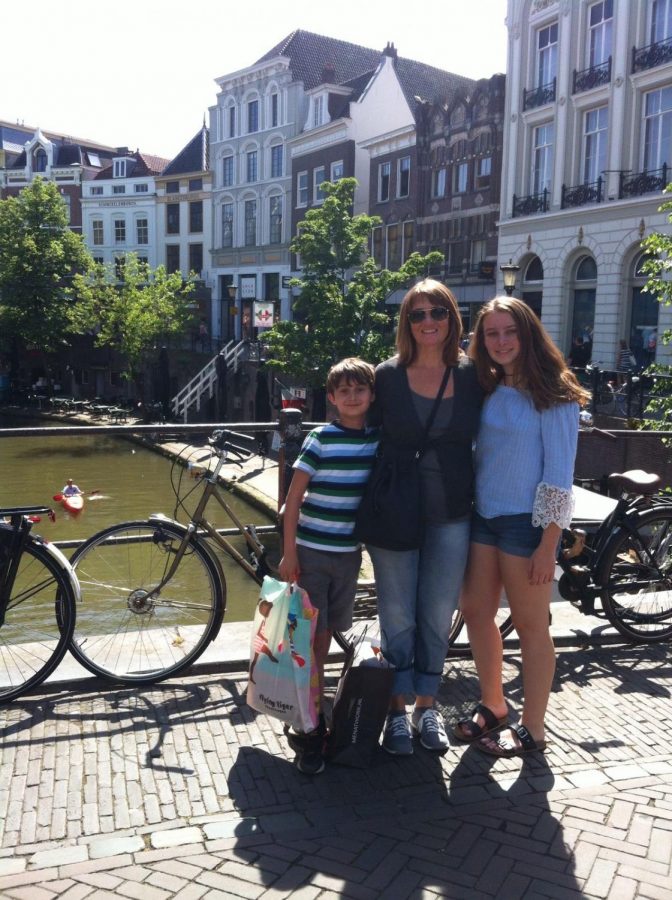 Emma Uppelschoten and her family in the Netherlands; she applied to two schools there and has had to rely on personal experience instead of college tours because of the pandemic.

After spending 18 years in the United States, several seniors are looking for a change in a new country.
Every year, high school seniors apply to colleges and universities in the United States and all over the world. While the majority of Grady seniors end up going to college in the U.S., others branch out and enroll in international universities.
“I’ve wanted to explore the world for a while, but I was mostly inspired to look at international schools due to the cost of college in the US, as well as its handling of COVID and recent events,” said senior Henry Gelber who applied to six international schools.
Unlike the holistic approach that most U.S. universities use in admissions, there’s a larger focus on grades and writing, rather than extracurriculars or community service hours, with international schools’ applications. Each student is required to submit standardized test scores and to write a 650-word introduction letter.
“They don’t have questions for each individual school, so you really need to condense all of your selling points into this one essay,” said senior Ava Young, who also applied to six international schools. “It’s a lot of pressure, but it’s also sort of nice not having to write a million ‘why this school’ essays, like you do for U.S. applications.”
The reasons for the gravitation to international schools varies by student, but many say their main reason is travel and cheaper tuition.
“I knew I wanted to go out of Georgia, at least, and my parents are really big on traveling; so, I’ve gotten to see other places,” said senior Emma Uppelschoten, who also applied to six international schools. “I also learned that a lot of European schools have three-year programs, which I thought was really cool.”
Unlike colleges and universities in the United States that require freshmen to take entry-level classes unrelated to their majors, most European schools have three-year programs that already include classes fit for certain majors.
“In Europe a lot of schools skip the first year of introductory classes and you get to go straight into your major which was really cool and also costs less,” said Uppelschoten.
Another draw for American students is dual citizenship. For those who have dual citizenship in England or the European Union, tuition is cheaper for European and Canadian schools. Generally, schools in Europe and Canada cost less than schools in the U.S., even without dual citizenship. According to a study published by the Organization for Economic Cooperation and Development in 2019, American universities’ tuition is nearly double the average tuition in highly-developed countries.
“My dad is a citizen of the Netherlands, so I have dual citizenship in the European Union, which helps a lot with cost,” Uppelschoten said.
While the language barrier in countries where English is not the dominant language may turn away many students, others are not deterred.
“I’ve been taking Spanish since I was in Kindergarten, but I’m definitely not fluent,” said senior Emma Menzies, who applied to IE University in Spain. “The good thing is most of the classes are in English.”
Because of Covid-19, many students can not travel to tour colleges domestically or internationally. Many rely on pictures and videos provided by the schools to get a look at the different campuses. Others rely on personal experiences.
“My grandmother lives in Utrecht, Netherlands, so I have been close to the University of Utrecht campus before, and a lot of schools have digital tours where you can take a look around,” Uppelschoten said.
Some students are apprehensive about the new environments of overseas schools and choosing their schools without properly seeing the campuses.

Attending college internationally may be transformative for students.
“There’s also a degree to which you can reinvent yourself in a new city, let alone a new country, and that’s exciting,” Young said.