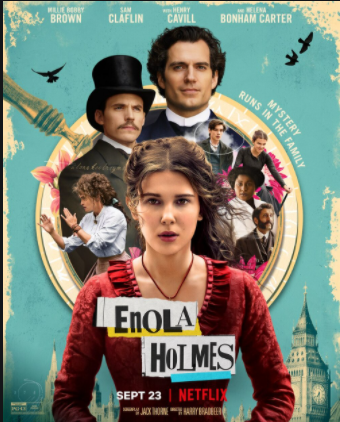 Depicted is the official movie poster for Enola Holmes, created by Netflix.

Since Arthur Conan Doyle first published the “Sherlock Holmes” series in 1887, the title character has become a household name. Less recognizable is Enola Holmes, his younger sister and the main character of a six-book series by Nancy Springer.
A Netflix movie based off the series, starring Millie Bobby Brown as Enola, is a hit with audiences because of the beautiful settings, engaging plot, deep emotions and magnificent costumes.
The movie opens in the picturesque countryside of Victorian England. The hero, Enola, is riding her bike, asking the camera “Now, where to begin?” She chronicles her life with her mother Eudoria (Helena Bonham Carter) up until age 16, and it is revealed that her mother loves puzzles. Enola’s father passed when she was young.
Enola didn’t have a typical upbringing for a young upper-class Victorian girl. Rather than teaching her embroidery, her mother taught her science, reading, sports and chess. Enola rarely spent time in the world outside of Ferndell Hall, her family’s manor.
Despite the pair always being together, Eudoria acts suspiciously, often having meetings in secret rooms in the house. These secrets become more concerning when she disappears on Enola’s sixteenth birthday, leaving behind nothing but some gifts and, seemingly, no clues. The plot follows Enola as she tries to sort out her mother’s disappearance while overcoming mishaps along the way.
The film had a powerful message. It’s set against the backdrop of a “Votes for All Men” bill in Parliament, and there’s heavy discussion of women’s suffrage in England, which was a crucial movement in Victorian politics. The filmmakers did an excellent job keeping the plot topical while also entertaining modern audiences.
Before watching, I expected a mystery story, and not much else. This film surpassed my expectations. The characters develop and change throughout the story and proper attention is given to their character development. Relationships grow, strengthen and even weaken and break.
There’s a lot more to “Enola Holmes” than a Whodunit tale. Sherlock Holmes, a character depicted by his original author as rather unfeeling, is shown to care about his sister as the plot develops, much more so than their brother Mycroft. Mycroft consistently only cares about portraying a good image to society. Enola grows more and more independent as she discovers the outside world for the first time, relying less and less on her mother.
A romance also develops between the heroine and Viscount Tewkesbury, a young lord Enola meets on her travels. It feels natural, and not forced. They become friends first and the focus of the film is on Enola, not her love life, which isn’t always the case in some movies.
Despite the beauty of the wardrobe, one of the film’s downfalls is its failure to make some of the costumes historically accurate. As Polish Youtube content creator Karolina Zebrowska pointed out in a recent video on the clothes of the film, some outfits were not quite suited for the era. For example, a pink dress worn by Enola was more suited for the 1870s rather than the 1880s, when the film takes place. Also, the blouse worn by Eudoria Holmes has no shape that would indicate Victorian origins.
Zebrowska does point out some costumes were accurate, including a corset worn by Enola in a shopping scene, as well as a casual dress Enola wears in the opening scene. The dress accurately reflected the teenage-specific style of the day. Still, it would have been nice to see more attention to detail on costume accuracy, overall.
This film combines talented actors, beautiful costumes, a powerful message of feminism, and a coming-of-age story, tied together by moments of Enola breaking the fourth wall, when she speaks directly to the audience as if narrating her own story. Viewers will feel like they know her by the time the final credits roll.
A message of hope is just what is needed in these isolated and uncertain times, and “Enola Holmes” gives us just that. As the young heroine says, “The future is up to us.”