Too many problems with live-action Mulan 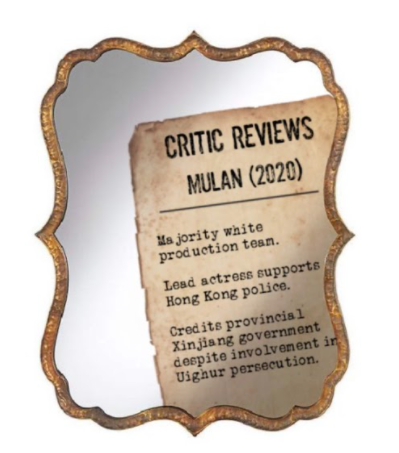 A reflection of a newspaper page detailing some of the issues with the new Mulan film.

Many Grady students have grown up watching, admiring and emulating the magic that are  Disney princesses: the animation, music and promise of a happy ending appeal to many viewers.
In recent years, there have been live-action remakes of some of these childhood classics, such as “Beauty and the Beast,”  “The Lion King,” “Cinderella” and most recently, “Mulan.” However, the release of the live-action remake of “Mulan” on Disney+ has brought up serious ethical and humanitarian concerns. These concerns have resulted in reasonable calls to boycott the film.
Based on ancient Chinese folklore, “Mulan” tells the story of a young woman who disguises herself as a man to take her frail father’s place in a war. The young woman, Mulan, becomes skilled at fighting before her identity is revealed to her comrades. This new adaptation aimed to be a more accurate adaptation of the original Chinese legend of Hua Mulan, cutting out the musical numbers that are peppered throughout the animated version and putting more of an emphasis on the training and fighting.
This film, and the ancient legend, show Mulan’s struggles with freedom from oppression and breaking social boundaries. However, Disney made some serious missteps while filming the live-action. According to the New York Times, eight government bodies in the Xinjiang province were thanked in the film’s credits.
That might seem harmless at first glance, but this government is currently persecuting Uighurs, an ethnic minority in the Xinjiang province of China. PBS says that at least one million Uighurs have been forced into internment camps in the area by government agencies.
On top of the inherent inhumanity of internment camps, the camps also have poor sanitation and medical care, so prisoners have become sick easily.  With the prevalence of the COVID-19 virus, there has also been increasing concern about the havoc the virus could wreck in such cramped, squalid quarters. Because of the spread and the lack of medical facilities, the camps would not be able to handle an outbreak without a massive portion of the population dying.
In addition, according to Forbes, in 2019, some Uighurs were moved out of these camps and moved to factories in central China to work. Besides the ethical problems with forced labor, there’s an even greater risk for outbreaks of disease in these factories, resulting in more opportunities for transmissions.
Perhaps worst of all, there have also been reports of ethnic cleansing. According to the Associated Press, minority women in China, including Uighurs, have been forced to stop reproducing by means such as permanent sterilization (hysterectomies, for example), Intrauterine Devices (IUDs) that act as long-lasting birth control and abortions if they are already pregnant. The continuation of this could result in the complete ethnic erasure of the Uighur community.
Some might say that Disney doesn’t have any responsibility in this matter. After all, it is true that the live-action aimed to be more realistic, which is a good thing, and one of the best ways to be realistic is to film exactly where your story takes place. It is true that Disney is not responsible for the atrocities in these camps. However, Disney’s disregard for the atrocities that are being committed in Xinjiang Province showcase an apathy that normalizes and ignores the humanitarian crisis.
Disney should not have filmed there at all. It might have meant sacrificing some accuracy, but the wonders of modern film technology would make it possible to recreate the scenery. Neither Disney nor the Xinjiang government should benefit from scenes in an area where human rights are being so blatantly violated. The company should have taken a powerful stance on this issue, one that could have led other entertainment services to speak out, but they did not.
Disney had the power to set a good example and make a statement about human rights in this situation,  but it chose not to; not only by filming so close to oppression but by thanking a government directly involved in the oppression. No matter what, people’s lives are more important than a movie.
The idea of a revamped, more culturally accurate”Mulan” is certainly tempting, but considering all of the issues with the film related to human rights, a boycott of the film makes perfect sense.