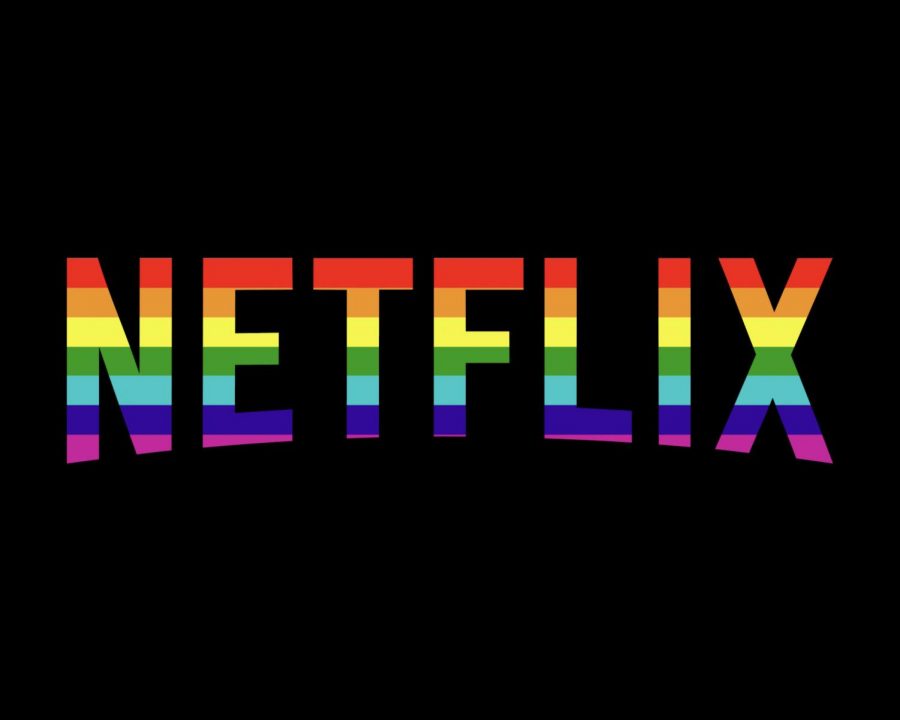 The Netflix logo in the colors of the LGBTQ pride flag against a black background.

Netflix has something for most people, including crime shows, superhero shows and comedies. However, not everyone is equally represented on the platform.
For instance, the LGBTQ community isn’t well represented at all. According to the Williams Institute, about 4.5 percent of the U.S. openly identifies as LGBTQ , which is over 14 million people. However, The Williams Institute survey didn’t poll anyone under age 18. This is a problem because Gen Z is a big factor in why representation is important. For example, according to the Pew Research center, about a third of the generation knows someone who uses gender neutral pronouns, and 48 percent think gay marriage is a good thing. To put it another way, the New York Times said that for Gen Z, words such as intersectionality feel as natural as using filters on Instagram.
Because of this, I believe Gen Z is more open to representation in the media and expects to see more of it, regardless of sexuality and gender identity or race and ethnicity. Considering Gen Z’s demographics, it makes sense for Netflix to start creating content with more LGBTQ+ representation. If not, Gen Z could stop watching eventually, and considering that the New York Times says the size of Gen Z is second only to that of Baby Boomers, large portions of Gen Z not watching Netflix anymore could seriously cripple the service in the future.
At this point, someone  might be wondering how bad the representation on Netflix actually is. Let’s look at it through the lens of original content, over which Netflix has complete creative control. Netflix has produced thousands of shows and movies over the years, and in 2019 alone, according to Variety Magazine, it released 371 original shows and movies. To put that in perspective, that’s more than the entire TV industry put out in 2005.
Considering all of those shows, it would be expected for there to be a fair amount of LGBTQ characters. Every year, the Gay and Lesbian Alliance Against Defamation (AKA GLAAD) releases the “Where We Are on TV” report, and from 2018-2019, there were only 88 LGBTQ characters across the streaming service’s original content. That isn’t enough to accurately show the sexually diverse population of both the U.S. and Netflix’s viewership.
Not only are there not enough characters overall, Netflix is actively cancelling shows with LGBTQ representation. According to Pride Media, “The Society,” featuring several LGBTQ characters, was cancelled in 2020 due to pandemic-related concerns. “I Am Not Okay With This,” a show featuring a main character who’s in love with her female best friend, was cancelled at the same time for the same reasons.
At first glance, these concerns may seem valid,of course, nobody wants actors or crew members to get sick. However, considering the streaming service is already low on LGBTQ+ representation, it may have been better to postpone production (as Netflix did for other shows, such as the third “Kissing Booth” and “The Witcher”). While the pandemic may be part of the reason, stigma against people who don’t identify as cisgender and heterosexual is definitely a factor.
But how much of a problem is stigma against the LGBTQ+ community? According to Yale University’s School of Medicine, 83 percent of LGBTQ+ people worldwide stay closeted. This is because being a non-cisgender or non-heterosexual person is seen as strange  and even illegal in some places.
This is not to say that if Netflix fixes its representation, nobody will be closeted anymore. People have their own, personal reasons for hiding their identities, and that won’t necessarily change. It’s also important to note that homophobia and transphobia won’t disappear if Netflix fixes themselves and starts producing more content with LGBTQ representation, because people will always have opinions. Netflix certainly won’t and shouldn’t be expected to solve this deeply-rooted societal issue. However, the streaming service could do better.
Increasing LGBTQ representation will help keep Gen Z watching, as well as making the world safer for those in the community. It’s time for the streaming service to be more progressive in diversifying the sexuality of the characters it creates.