Mental health influenced more than ever by social media 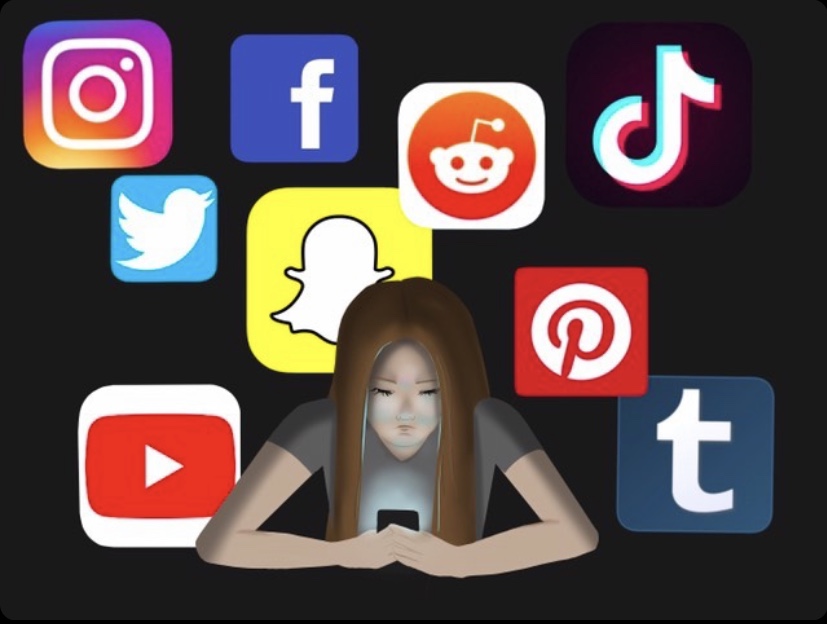 Social Media influence is increasing in people's everyday lives, as we are stuck at home during the quarantine period.

With the Coronavirus pandemic keeping everyone inside their homes, social media usage has continued to escalate at a steady rate, for both personal and professional usage. The statistical impact is clear, but the mental influence is not always so prevalent.
“It’s sort of a test,” said Jamie Jones, CEO of two businesses, a handywoman business and a clothing business, who continues to work through the pandemic. She is an entrepreneur who works in and around the Grady community.   “There’s no doubt that [social media] influences everything now. When an article comes out, everybody that believes that piece of information starts posting it and having their own personal take on it, and next thing you know, it’s news. Once people find out it’s fake, it doesn’t matter anymore. People still believe that piece of information because it has been backed by so many people.”
News spreads quickly in the new all-virtual world, which can do more than just misinform someone.
“I connected with some family, which was going well for a while, we were sharing our similar experiences, until politics got involved,”  Jones said. “Some distance was made, less interaction, because you don’t want to get into confrontation with people. It’s already hard enough, emotions are heightened, and it’s hard to connect really. However, politics were getting in the way of trying to interact with some of my family members.”
According to The American Institute of Stress, increased social media use can cause more anxiety because the content has an emotional effect, but does not provide any mental support.  It becomes a cycle where people are enveloped in their thoughts the more they use and rely on the media platforms.
“Social media has a ton to do with mental stress,” said Amanda Jones. Amanda is an associate producer for an experimental production agency, who constantly works with social media for planning events surrounding the district. “Personally, I know my anxiety has been worse because of it. I constantly need to know what everyone is doing, and I always see how everyone’s life is so much cooler than mine.”
There are some positive aspects to social media. Due to the lack of in-person gatherings, social media has kept people connected, whether person-to-person, business-to-business, or friends-to-family.
“I actually have made a lot of friends,” said sophomore Chloe Walker, of the role social media has served in helping to connect her with others over during social distancing. “I’ve met a lot of new people over apps like Snapchat and Instagram, exploring the same post or story. It’s really interesting how close you can get to someone without even meeting them.”
People from varying ages and genders have connected with friends and family through social networks. People like Jamie have experienced this firsthand, and she is not alone.
“Social media benefited staying in touch with friends,” said junior Scott Whitley. “It gave me an opportunity to talk to them, which wasn’t possible in quarantine. It really helped the relationships with my friends stay strong, even though we didn’t see each other in person.”
In addition, social media has aided businesses by providing knowledge for companies that are working through the pandemic and keeping people safe while doing their jobs. It has recently been a major news outlet for many companies in an attempt to spread more data.
“ We’ve used Twitter a lot for work,” Amanda Jones said. “Working in the event field, we have to check the CDC guidelines or what the county, city, state government mandate is. I use it to gather news and information to make sure that everyone is staying informed and safe.”
According to sites like the New York Times and Business Insider, social media apps are being used now more than ever, for information, connection and communication. Movements like Black Lives Matter are being spread across the country and inspiring people to take action during a time of political unrest. More people are becoming aware of the importance of paying attention to the world’s problems.
“I think that we, as a nation, wouldn’t be as aware or as active in these movements,” Jamie Jones said. “I think it’s really made a lot of us sit back and think about what’s important, and focus on what actually happens on a day-to-day basis, and it helps us see what other people have to go through.”