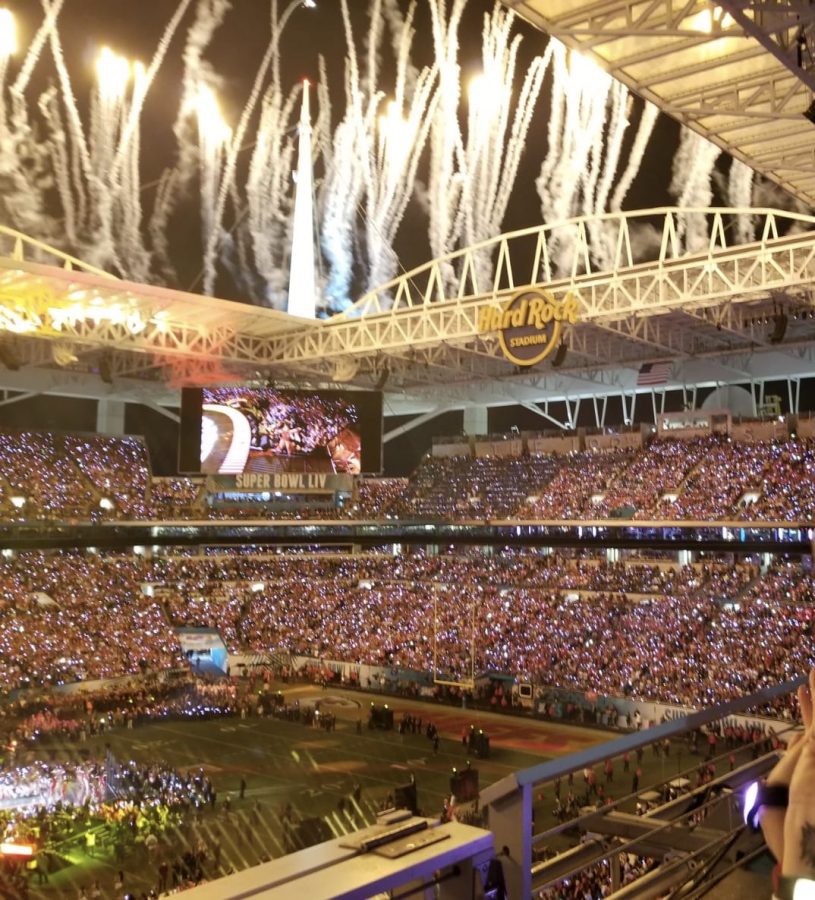 Fireworks illuminate Jennifer Lopez and Shakira as they preform at halftime of the Super Bowl.

Making it to the Super Bowl is not an easy goal to accomplish for any NFL coach, but making it as a female coach is unheard of.
Kate Sowers, the assistant offensive coach for the 49ers, made history on Sunday, February 2nd as the first female and openly gay coach to coach at a Super Bowl.
“As a 49er fan I am very impressed with Kate Sowers,” sophomore Jack Collins said. “She has said her goal is to be the best coach, not just the best female coach. She helped to bring the 9ers to the Super Bowl and is really showing how women are just as good, if not better coaches than men. I hope other females will follow in her footsteps and be a part of the NFL.”
Sowers is not the first female to coach in the NFL. Jen Welter, who worked for the Arizona Cardinals, made history in 2015 when she became the first female coach in the NFL. This year four women, including Sowers, have held coaching jobs in the NFL.
“It’s so strange that it’s taken more than half a century for there to be a female coach to be at the Super Bowl, but I think it’s amazing that she was able to be there,” senior and Ignite club president Nadia Mcglynn said. “To find a way to work in such a field that men virtually control completely she has to be incredibly strong and diligent, and I am very proud.”
Demi Lovato kicked off the game by singing the National Anthem. Alongside Lovato was Christine Sun Kim, who signed the National Anthem on behalf of the National Association of the deaf.
At halftime, Latina singers Shakira and Jennifer Lopez took the stage. They each performed separately before joining together in one final song. Women played a key role in creating a memorable Super Bowl performance.
“I think Shakira and J Lo were great, empowered female performers that formed a wonderful halftime show,” Mcglynn said. “I don’t think that people fully appreciated the work they or Kate Sowers or Demi and Yolanda Adams put into their work, but it’s always wonderful for girls to have someone to look up to whether that be a football coach or a pop star.”
Additionally, women were prominent in the commercials throughout the game, including U.S. Women’s national team stars Carli Lloyd and Crystal Dunn.
At this year’s game, a two-minute ad was shown that included 32 children, a third of whom were female. The ad features Toni Harris, the first woman to receive a full-ride college scholarship as a field player. Harris tackles former NFL Linebacker Ray Lewis in the ad.
“The Super Bowl is the biggest ad opportunity for companies,” Collins said. “Knowing that females viewership is increasing I would imagine companies make their ads to interest all people. I’ve noticed ads feature males and females equally, but also members of the LGBTQ community which is a progressive step forward in our society.”
The strong female influence on the Super Bowl reflects not only how women are viewed by society, but also how advertisers and the NFL are acknowledging the large portion of the fan base that is female and their role in market consumption.
NFL Commissioner Roger Goodell has stated that this year the league has reached a program-high of 187.3 million fans, 47% of which are women (NBC news). Additionally, eight out of the 32 NFL teams have women as their primary stakeholders.
“I think that female viewership has made the ads in the Super Bowl change to portray things that would entice more genders,” Mcglynn said. “I didn’t really start watching the Super Bowl until high school, but even this year I’ve noticed a decrease in sexualized and objectified women in ads and I greatly appreciate it. Showing women in the crowds and coaching convince more women to watch and showing commercials/advertising portraying women as more than just objects does the same.”