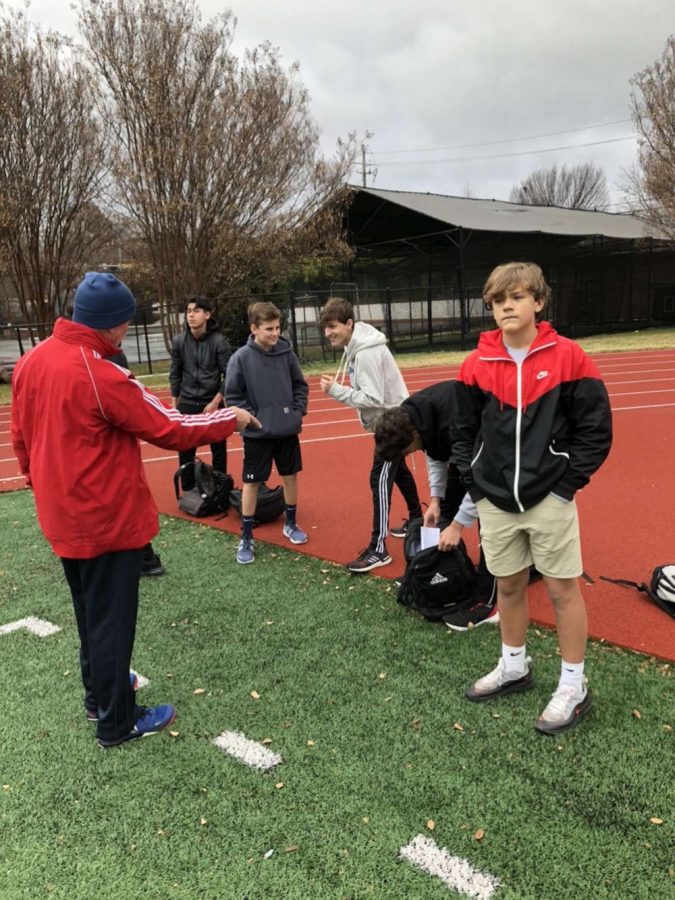 After losing six of their ten games last season, the Grady boy’s soccer team is looking to turn the program around. With a change of coaching staff, the team is optimistic that they will get better results this season.
“I think the change in coaching staff is going to help the team become stronger and help us have a shot at the playoffs this year,” sophomore Skyler Cottrell said. “I definitely think that the JV coach staying on the coaching staff will help the team improve because he knows the potential of the JV players and can share his knowledge of the teams with the new coaches.”
This year, an abundance of freshman players may help the team become more successful. The new class brings new talent and new opportunities for the team to excel this season.
“Being a part of the freshman class may sway my opinion, but our large class could help the team win games this year,” freshman Zach Spangler said. “This means more players to choose from and a better chance of getting new, high potential players on the team.”
In the 2018-2019 season, the team lost 11 seniors who played on the varsity team, leading to the downfall in their season standings. Their 2017-2018 record was 5-1 while their 2018-2019 record was 2-3.
“I think we had a bad season last year because we lost 16 players which made an impact on the team’s chemistry,” previous captain Gavin Duckett said. “When they left, the team was unorganized and lacked the energy we needed to win games.”
Before the 2018 season, the team held captain’s practices, in which players would scrimmage and have the opportunity to get to know each other. Additionally, former coach Josh DiGiovanni held fitness training twice a week in order to keep the team in shape.
“This season might be different from last year’s because we have a whole new coaching staff, which I think will lead to more wins and a totally different team dynamic from last year with the new players,” Duckett said.
This year, in order to be more successful, new head coach Jaime Benedetti has made changes in how the team will prepare. He has increased conditioning practices and added the use of video streaming to improve season standings.
“I think good preparation always has a positive impact on performance, whether in sports or something else like school,” Benedetti said. “If the coaching staff prepares the team properly, we will be much more likely to have a successful season.”
Coach Benedetti is considering purchasing an online game visioning program to teach positioning and field awareness. This program would require players to complete modules representing situations similar to those in games.
“This is a cognitive training tool that helps players develop the mental aspects of soccer, such as awareness, decision making, recognizing space, and passing lanes,” Benedetti said. “This is an aspect of soccer that is difficult to practice. You only get better at it by playing more soccer and being in those situations more often. This tool allows us to isolate some of those skills and give players more repetitions than they would otherwise be able to get. If each player is able to improve his decision making by 10-15%, the cumulative impact on the team’s performance will be significant.”
Additionally, a portion of additional funds raised will be put towards a video recording program called HUDL. Film from recorded games will be incorporated in training as a way for the team to analyze their games and learn from their mistakes. It could also be used for highlight reels to be sent to college scouts.
Players can attend optional weight training and conditioning practices, including cardio and plyometrics, on Tuesdays and Thursdays. In addition, this year’s senior players are holding captains’ practices on Wednesday afternoons.
However, GHSA rules prohibit any practice of five or more students under the supervision of a coach before the opening of the designated season, preventing the team from holding any mandatory practices.
“High school soccer rules are very restrictive and we are extremely limited in what we can do as a group prior to January 13th,” Benedetti said. “We are doing everything possible to prepare and get a jump on the season while still staying within these rules. We have begun strength and conditioning sessions two days per week. We also encouraged the players to organize their own group training. They can get together and train with a ball as long it is it is not led by the coaching staff.”
Both coaches and players can agree that one of the most important ingredients to a successful season is teamwork and building a bond among players.
“I want to instill a sense of unity and teamwork,” Benedetti said. “We will win as a team, and we will lose as a team. A group of mediocre players playing as a team will always beat a group of talented players playing as individuals. So the team always has to come before any individual player. If the team is successful, all of the players will be successful.”