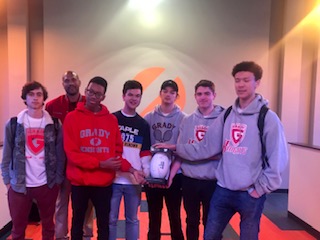 Esports have existed for a relatively long time in the professional world, but now it’s starting to come into high schools, allowing virtually anyone to join and get into the sport.

At most high schools people who like to play sports would go into something like football, volleyball, or baseball. First, esports aren’t technically sports by definition but they are similar in many ways. Usually 2 teams versus each other over multiple rounds and sometimes even with a large audience, but they still aren’t quite sports by definition more of a sport for your mind than for your body. According to Engadget there are a variety of benefits/challenges to playing games like better hand-eye coordination, strategy/anticipation, quicker decision making skills, reading and math, and poses challenges like having to learn to react quicker to something on the screen and working better under pressure.

At Grady, esports will start soon with new teachers, Coach Alexander and Ms. Goodwin, organizing the times and places for the practices and skirmishes. Currently only one game has taken place, they played a game called Smite where you have characters that fight other characters until they reach the end and the team with the most points at the end wins. Grady won 31-1 against North Atlanta and 86-6 against Creekside.

Esports also has more than just mental benefits, because esports is still an up and coming sport it still has a lot of potential for it to help people get bigger in the gaming world. Big esport games usually have large prize bowls and help gamers get more games to play meaning more and more money. It isn’t always tied to prize bowls though, for some more legitimate players they get paid by sponsors even if they lose meaning they can go on to play more games easily.

While most esports games are centered around a PC or console, some include a new technology called VR or virtual reality. These currently aren’t available at Grady but as of recently the school has gotten a VR headset to use for educational purposes, this could mean later adoption of the technology. In VR games it is a completely different experience so there are completely different types of games in VR esports. Games like Beat Saber or box VR are rhythm games that you would really never see in a pro PC tournament but in VR it works very well because it takes a bit more skill and endurance.

In conclusion it seems that the esports club at Grady will be a very interesting addition to the clubs here at Grady.