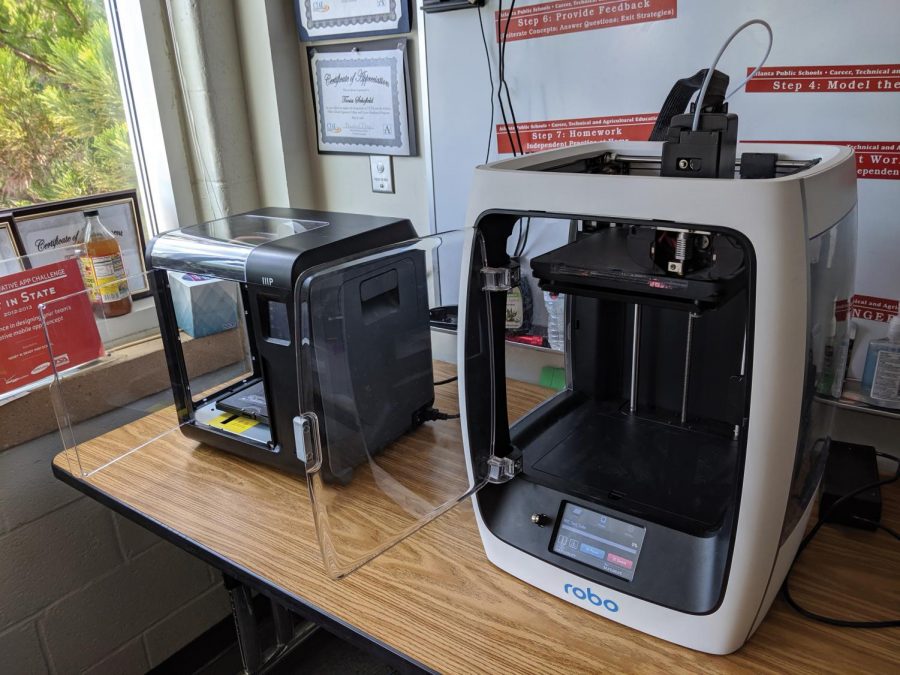 Newly installed 3D printers sit on a table in the engineering room, they were just installed last week near the end of the first week of school.

Grady’s engineering pathway is rapidly changing this year. Many new resources have been given to the program, allowing students to manufacture the models they design in class.
The 3D printers are the most recent addition to the engineering program and have already had a large impact. They virtually allow any student to take a model they made and produce a tangible object from it. However, these new resources are not without fault. In a high school environment, 3D printers are more likely to break. This likelihood of damage is detrimental because almost no one in the school is trained to fix them.
The printers have many applications from fixing broken parts to creating entirely new objects. They also attract new students, adding a reason to join Grady’s engineering pathway. The new faces have slowly formed a new engineering program that enters in competitions across the US, winning many awards and sporting a high finishing rate for the course. Grady is one of the only schools without an engineering facility, making the accomplishments more impressive.
Tonia Schofield, one of Grady’s engineering teachers, started with practically no engineering program in a high pressure environment. Even still, there were kids that wanted to join the pathway and learn about engineering. At the time, that meant using cardboard to make their designs. The program has obviously progressed from its start with the implementation of the new printers and even VR in the engineering concepts class.
“They don’t have nothing–we are the only school with no engineering facility–when we came here we were working with nothing.” Schofield said
Before Grady, Schofield had worked at a middle school but wanted to move to Grady for a new challenge. She said that Grady was really her first and only choice, seemingly because of its lack of engineering program, so it would give her a chance to build a program from the ground up. Scofield has definitely made an impact, and after six years running, the engineering program has three 3D printers, a VR headset for viewing models, all new computers, and a new teacher.
Though these resources weren’t easy to come by, Schofield’s background in engineering allowed her to bring in things from her own home when she started out at Grady. She also got help from Dr. Bockman with donation money and support for getting grants.
“I was fortunate enough to bring things from home–I wrote grants–and Dr. Bockman came up with 6,000 dollars.” Schofield said
Schofield mainly attributes her success to the students who supported her in the beginning. The lack of resources didn’t bode well for the future of the pathway, but the students stuck with the program, creating a platform for future success.
“I have to thank those students who helped us build it from nothing,” Schofield said. “I was just crazy enough to be here.”