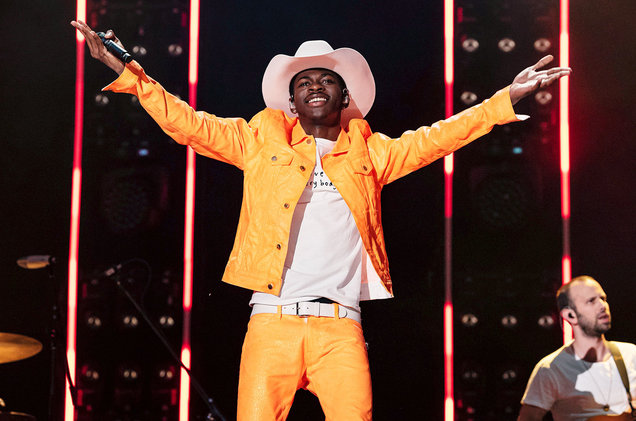 Lil Nas X performs during Day 3 of the 2019 CMA Music Festival on June 8 in Nashville, Tennessee.

Lil Nas X the 20-year-old Georgia superstar strikes gold with his single “Old Town Road”.  With “Old Town Road Nas attempts to blend hip hop and country and succeeds flawlessly. With 19 weeks at number 1 on the billboard hot one-hundred, Lil Nas X shows that the effects of this hit are going to be felt long after its gone.
Lil Nas X’s hit was created from his feelings of loneliness after dropping out of college, something a lot of teenagers connect within this generation. The song was picked up on the app “TikTok” where teenagers would make funny videos while dancing and lip-syncing to the song. The song then picked up steam when it debuted at #83 on the billboard hot 100.
Even though Lil Nas X, a graduate of Lithia Springs High School in Douglas County, had reached fame and success, most of it was discredited by Billboard when they took Old Town Road off of the country hot 100. They described it as not having enough country elements for it to be fully embraced as a country hit.
Country legend Billy Ray Cyrus gave support to the 20-year old by hopping on a remix of the song, growing its popularity and longevity by ten-fold. This lead the song all the way at #1 on the Billboard Hot 100. Old Town Road continued to stay at the top of the billboard for 19 weeks breaking the streak of Mariah Carey’s “One Sweet Day”, which held the record for 16 weeks in a row.
With several remixes being released, including features from Young Thug, Mason Ramsey, Diplo, and RM, “Old Town Road” maintained its relevance for a very long time.
Unfortunately for Lil Nas X, 19 weeks later, the song was knocked off the charts by Billie Eilish’s “bad guy”.
Lil Nas X also recently came out as gay on his new EP “c7osure,” which allotted him the support of the LGBTQ+ community and further increased his fanbase. The c7osure Ep included the original Old Town Road and the Billy Ray Cyrus remix but also including some new hits including “panini” and “ rodeo feat. Cardi B,”proving Nas is not just a “one hit wonder.”
Lil Nas X shows that the current tide of popular music is changing. Not only does Nas have award nominations at the teens choice awards, but he won the award for choice r&b Hip-Hop song for his song Old Town Road ft. Billy Ray Cyrus. Lil Nas X proves himself to be a trendsetter while setting the standard for what is to come.