Baseball strikes out among young Americans 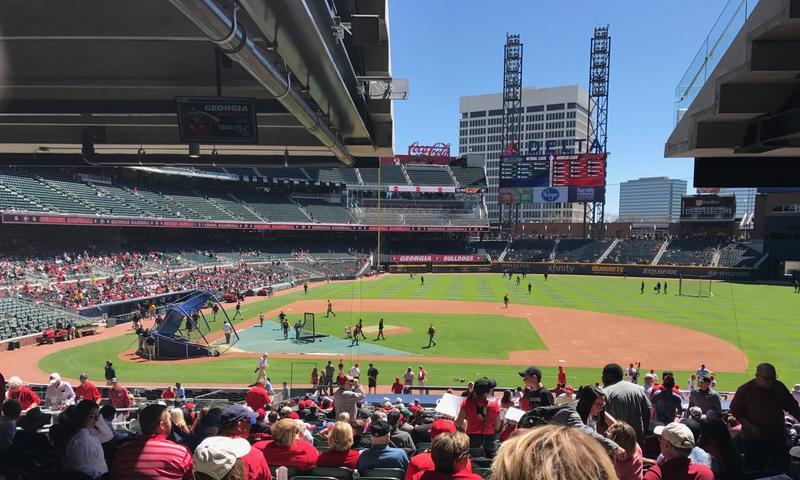 Courtesy of the Atlanta-Journal Constitution.

Many baseball stadiums experience large holes in the crowd like these in SunTrust Park as interest in baseball wanes nationwide.

When the Super Bowl rolls around, everyone is talking about it. It doesn’t matter whether or not someone cares about football; the Super Bowl is understood to be more than a game. It’s a hallmark of American culture.
In contrast, the World Series finished recently, and I did not hear a single student mention it. Obviously, the experience is not exactly the same, but the question came to mind: with baseball once being dubbed “America’s pastime,” why is no one watching?
The decline in viewership is very clear. The Chicago Cubs and the Cleveland Indians, both with dedicated fan bases and long championship droughts, only drew in about 40 million viewers to their historic game 7 in 2016. By contrast, viewership was down during the unfortunate Falcons-Patriots match-up in the 2017 Super Bowl, and “down” meant 111.3 million people.
Possibly the waning interest is due to the tendency of younger people to reject the older, more “nationalistic” traditions of the past. The average viewer and season ticket holder are both in their fifties, noticeably segregating fans by age. Baseball has both the oldest and whitest demographic of any major sport.
It may also be due to the decreased number of Americans playing in general. A large number of current baseball players are immigrants, with 42.6% of Minor League and 27% of Major League baseball players being foreign-born. With each passing year, the sport becomes more and more “Latin America’s pastime.”
However, the Major League Baseball (MLB) commissioner and I agree on what is probably the biggest culprit: today, kids just aren’t playing, meaning the interest never gets a chance to develop. When Little League participation was at its highest during the 1990s, 3 million kids were registered. In 2008, the number dropped to about 2.4 million, and it continues to decline each year.
For children living in cities, it is much easier to find a basketball court than scrounge up the equipment and find space needed to play baseball. College opportunities do not come for baseball like they do for other sports, making the sport even less attractive for low income students, and giving baseball even more of a reputation as a “rich kid’s sport.” That’s not to say the MLB isn’t trying, with urban youth outreach programs, but their efforts do not seem to be panning out.
For the majority of Americans, gone are the days where an evening would consist of going out to a baseball game. Seats are more expensive than ever and, unfortunately, the MLB’s paycheck is satisfied without them being filled. The majority of their revenue no longer comes from ticket sales.


For all the complaints, however, baseball is still an amazing spectacle. ESPN calls it the hardest sport in the world for good reason: pitching, hitting, and catching baseballs at incredible speeds requires many impressive, difficult skills. The sheer number of games, 162, may seem overwhelming to some, but I would argue it simply makes teams all the more accessible.
Like any sport, baseball can capture the best and worst of humanity. There is without question less national interest than in years past, and unfortunately, this issue won’t be going away anytime soon. But despite this, it still holds a special kind of power over the fans it has left. After all, the Chicago Cubs’ victory parade in 2016 became the seventh largest gathering in the history of mankind.
Delete Image
Align Left
Align Center
Align Right
Align Left
Align Center
Delete Heading